A Baker’s Dozen of Bunnies in Science Fiction and Fantasy

Top 13 Bunnies in Sci Fi! Find all of your favorite Bunny characters in this Easter-themed List! 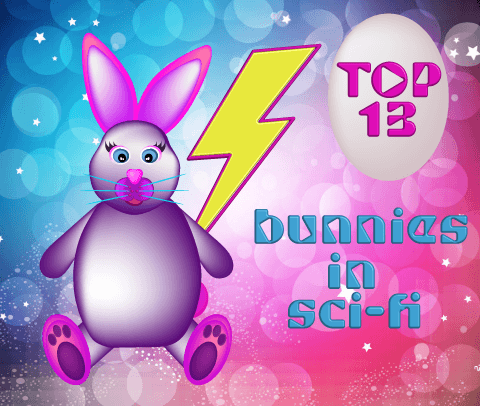 Trying to winnow down our favorite rabbits in Science Fiction and Fantasy has proven to be a harder task than I imagined. Here they are:

13. Bugs Bunny – If you pause for a moment you can probably hear his voice in your head. Think about it, you probably can’t remember the sound of your Grandma’s voice but “Eh, what’s up, doc?” is there taking space. Looney Tunes indeed.

12. Harvey – One of my all-time favorites. After all, he can make time stop and take you to any place you would care to be. Described as a six-foot, three-and-one-half-inch tall Pooka resembling an anthropomorphic rabbit. “”P O O K A – Pooka – from old Celtic mythology – a fairy spirit in animal form – always very large. The pooka appears here and there – now and then – to this one and that one – a benign but mischievous creature – very fond of rumpots and crackpots”

11. Roger and Jessica Rabbit – Rabbits get the best lines “Yeah. Check the probate. Why, my Uncle Thumper had a problem with HIS probate, and he had to take these big pills, and drink lots of water.” But let’s face it, they are best known for Jessica Rabbit’s seductive poses and knock out figure.

10. Crusader Rabbit – Sadly there are not that many people who remember Crusader Rabbit these days but he, like Mighty Mouse was a Saturday morning cartoon hero. He was the first animated cartoon show EVER on television. Crusader Rabbit was the story of a courageous rabbit and his best friend, Ronald T. “Rags” Tiger. Of course there also was a dastardly villain, Dudley Nightshade.

9. Bunnicula – Bunnicula: A Rabbit-Tale of Mystery. Unlike “human” vampires, Bunnicula draws his sustenance from drain the juice of vegetables! Bunnicula has fangs, which enables him to bite vegetables and suck the juice out of them, leaving them ghostly white. In The Celery Stalks at Midnight Bunnicula, escapes his cage while being left in his human family’s garage, and escapes into the night, leaving a trail of white vegetables in his wake which another character, Chester, is convinced must be destroyed by using a stake (or toothpick)through their hearts.

8. Br’er Rabbit – Uncle Remus – Due to the racist elements that were inadvertently weaved in through the film “Song of the South”; a couple of generations have been deprived of the wit and wisdom of Br’er Rabbit. Br’er Rabbit himself is a trickster whose roots reach back to African and Cherokee folklore.

7. Babbitty Rabbitty – Babbitty Rabbity and her Cackling Stump is found in The Tales of Beedle the Bard by JK Rowling. Babbitty is actually a human witch and she transforms herself into her Animagus form which is that of a rabbit to get revenge for persecution. Please note, a true rabbit isn’t vengeful but that is what comes of fulfilling the dreams of a wanna bun.

6. Fiver – He is one of a community of bunnies in Watership Down by Richard Adams. There are so many wonderful bunnies in this book, but with his psychic talents he is quite special.

5. Peter Cottontail, sometimes known as Peter Rabbit– from The Adventures of Peter Cottontail by Thornton Burgess – Peter learns that putting on airs to live up to the important name he had given himself comes at a great cost

4. Rabbit -Winnie-the-Pooh by A. A. Milne Rabbit is a good friend of Winnie-the-Pooh. He is always practical and keeps his friends on their toes, although they sometimes raise his indignation by mistake.

2. Thumper –Bambi – Thumper gets his name from his habit of always thumping the ground with his right hind leg. Anyone who has felt the thump of a bunny knows it is an impressive action.

1. White Rabbit -Alice’s Adventures in Wonderland – by Lewis Carroll. He is very concerned with time. He has a pocket watch that he consults quite frequently. In the print book he was known to have said “Oh dear! Oh dear! I shall be too late!” and it is the reason Alice follows him down the hole into Wonderland. In the Disney movie he is more musical and sings “”I’m late, I’m late, for a very important date. No time to say hello, goodbye, I’m late, I’m late, I’m late”

Bunnies are most wonderful creatures. They are gentle and loving yet can be very territorial at times. From folklore and fairytales to the farthest reaches of the Galaxy they touch are hearts and our imaginations. But please, please folks, do not tell your children that bunnies lay eggs!