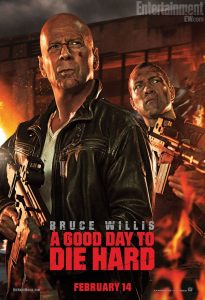 It’s been a few years, and Police Detective Lieutenant John McClane is a bit older and more shopworn around the edges, but otherwise unchanged. His people skills haven’t improved much, though. But still, it’s definitely A Good Day to Die Hard.

It’s been a while since John saw his son Jack, and they didn’t part on the best of terms. A check reveals that Jack is in serious trouble–in Moscow! After a quick hug to his daughter Lucy, McClane Sr. hies off to Mother Russia to rescue his son and bring him home again.

This movie starts in with action right at the start, then builds up to more action, takes a deep breath, and gives you a double helping of action (twice the McClanes is twice the fun!). Right up front there’s a three-way extended chase through the city with lots of gunfire, rolling vehicles, and crashes. And that’s just the appetizer . . . .

This is a Die Hard movie, so expect interesting helicopter moments. And lots and lots of bullets. And John McClane getting beaten up and coming back for more. Add in Jack (John McClane Jr.) getting the same treatment–they’re a great team.


The plot twisted and turned and kept you guessing, with lots of intriguing foreign locations. A cast of inscrutable Russians with crisscrossing motives added to the drama. Throw in the occasional billionaire, government official, and tap dancer. And a few Chechen rebels–or at least their cars. When John McClane goes out of town, he really does it right.

There are beautiful moments of “almost bonding” between McClane and his son–full of wisecracks, but touching just the same. The relationship is surprisingly believable. Bruce Willis and Jai Courtney are a great pairing.

Among the things they got right in this one–the traffic! It’s always like that in Moscow. The part that was harder to swallow was that they found enough room to do a chase of any kind on the ground . . . .

I went into the movie theater expecting a Die Hard movie, and they delivered. In fact, I saw all five of them, and they hold up surprisingly well. Go see it, but don’t expect Anna Karenina.

After twenty-five years of acquaintanceship with McClane, going to Russia with him is just the vacation I needed. Grab your “Idiot’s Travel Guide to Moscow”, hop on Aeroflot and come along. Yippee ki yay! 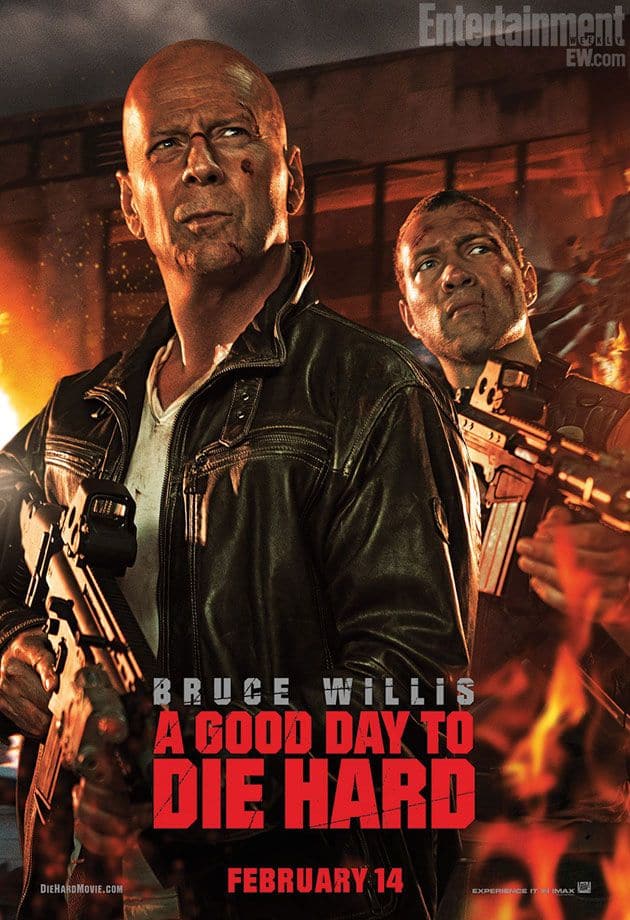