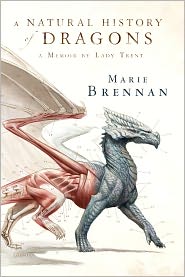 A Natural History of Dragons: A Memoir by Lady Trent

Dragons are fascinating in the fact that though there has never been any evidence of their existence: they appear in various cultures throughout history. Their symbolism pretty much runs the entire gamut of meanings. The entire fantasy genre is heavily influenced by or centers on dragons. But what if dragons were real? As in really real and not some magical based nonsense. That would be an awesome field of study.

Lady Trent is the most respected expert on dragons. She begins to look back at her lifelong study, beginning as a young girl—at the time she went by her given name, Isobella—who fascinated with the tiny sparklings, dresses as a boy so she can join a dragon hunt. Her interest doesn’t wane as she grows into adulthood but luckily she finds a man, Jacob, who not only indulges her in her study of dragons, he encourages it (even though it wasn’t thought to be a lady-like pursuit at the time). The couple befriends Lord Hilford and thus begins her academic study into dragons. It’s here where the novel departs from its metafictional approach and takes on more a straight up narrative tone. It’s a pity, because Brennan shows real talent for metafiction writing.

The trio head to Vystrana, where not only can they see occasional dragon from a distance, dragons roam about freely and close to towns. Upon arriving they find that dragons have been attacking a local village. A trip to the local Draconean ruins (where dragons were once worshipped) seems to make matters worse. A tale goes around about an angry half man, half dragon, Zhagrit Mat. While the locals are blaming Lady Trent and her friends for disturbing the ruins and bringing the wrath upon them, the scientists dismiss the notion as silly. But something sinister is happening. And someone or something is making the dragons attack.

The book starts out beautifully. Brennan is a strong writer and as I said has a knack for metafiction. As we go into the middle part the book begins to drag a bit. Passages are just too long. The milieu had been thoroughly established at this point and it seemed like some points were being belabored. The dragon religion and Zhagrit Mat were an interesting back story that, again, could have been farther fleshed out–in end notes or footnotes, think House Of Leaves (Random House, 2000). Brennan makes up for the lull with a tightly wrapped up ending closing off all plot holes of this book and leaving plenty of ideas to populate future novels in the series.

Along with a good story, Todd Lockwood treats readers with some amazing artwork. From the dissection illustration on the cover to some striking (and a few haunting) sketches inside, the art in itself is worth giving the book a look over.

A Natural History of Dragons: A Memoir by Lady Trent.
GET A COPY HERE!

Marie Brennan begins a thrilling new fantasy series in A Natural History of Dragons, combining adventure with the inquisitive spirit of the Victorian Age.

You, dear reader, continue at your own risk. It is not for the faint of heart―no more so than the study of dragons itself. But such study offers rewards beyond compare: to stand in a dragon's presence, even for the briefest of moments―even at the risk of one's life―is a delight that, once experienced, can never be forgotten. . . .

All the world, from Scirland to the farthest reaches of Eriga, know Isabella, Lady Trent, to be the world's preeminent dragon naturalist. She is the remarkable woman who brought the study of dragons out of the misty shadows of myth and misunderstanding into the clear light of modern science. But before she became the illustrious figure we know today, there was a bookish young woman whose passion for learning, natural history, and, yes, dragons defied the stifling conventions of her day.

Here at last, in her own words, is the true story of a pioneering spirit who risked her reputation, her prospects, and her fragile flesh and bone to satisfy her scientific curiosity; of how she sought true love and happiness despite her lamentable eccentricities; and of her thrilling expedition to the perilous mountains of Vystrana, where she made the first of many historic discoveries that would change the world forever.