The Other Side of East

Find out what anime is really about and where it actually came from – you may be surprised. If you think it’s weird, read this and find out why it’s worth a try. 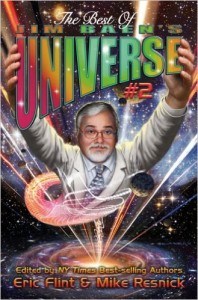 Jim Baen’s (founder and publisher of Baen Books) bimonthly online fantasy and science fiction magazine. It is recognized by the SFWA as a Qualifying Short Fiction Venue.

My journey into animé began in the summer of 2009. Up until then I was a typical SF fan. I saw the movies, hung out with local fans, and read as many SF/F books as I could squeeze into my time.

I’d written that book we all hope to write and—after only 25 years—had managed to sell it for serialization in “Jim Baen’s Universe.” My then-mentor (who was the only reason I’d managed to sell the book at all) assured me that now I was a pro, I had to start attending WorldCons, starting with the upcoming Anticipation in Montreal. I was also ordered to write the Programming Committee immediately, volunteering to serve on as many panels as possible—regardless of subject matter. The key was to get my name out to fandom. I was thrilled! Me, on panels at WorldCon!

I duly assured the Committee that I had several thousand interests, literary and otherwise, ranging from tai-chi to Jane Austen to Hebrew chant to cartoons. Yes, I said cartoons, such as: George of the Jungle, Danger Mouse and Pinky and the Brain. I didn’t even include Invader Zim, which I had not yet discovered. I had never seen any animé.

Naturally, the Programming Committee (who may have known no more about it than I) picked up on the one thing I was least qualified to talk about, and assigned me to an animé panel.

Fortunately I had a friend, very active in animé fandom in Chicago, whom I called in a state of desperate panic. “I’m doomed!” I wailed. “Teach me!” And he did.

He sent me pages and pages of background, history, current trends, and the development of various tropes. He sent me lists of titles and studios. My supernaturally supportive husband embarked with me on a crash course, during which all normal TV watching (and a good deal of reading) was canceled in favor of watching the recommended animé.

(Prepare yourselves for the old-fart rant about how easy kids have it these days.) Very little material was available at the library. Netflix didn’t carry much animé back then. I knew nothing of streaming. I could only thank the powers-that-be for Cartoon Network and video recorders.

I begged, borrowed, scrounged and—when all else failed—bought disks and tapes. Sometimes, due to inadequate supply or a shortage of time, I watched only three or four episodes of a recommended series. (This led to an embarrassing moment at Anticipation, when discussion lingered on a show that had changed direction drastically in episode six.) Still, despite the holes in my knowledge, the WorldCon panel went well. A couple of fans actually sought me out at parties later on. Again, I was thrilled—as much because it was over as because it went well. 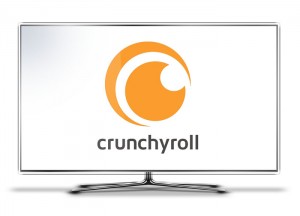 But there were consequences. When we got home we found that ordinary TV had grown horrifically more ordinary.

Even my beloved SF seemed stale. Our comfy, familiar world suddenly looked cramped and dark. Evenings, we swam fruitlessly through all the regular channels, until one night in desperation we checked back on silly old Cartoon Network. And after that, again. And again. By the time we signed on to CrunchyRoll we had faced the truth—we were hopelessly addicted.

There are worse addictions. Some of our friends look at us a bit strangely, or roll their eyes when we compare Cowboy Bebop

to Farscape. Sometimes, when we’re watching a show about soul-sucking aliens disguised as frilly dresses with décolletage, even my husband remarks, “We may be the weirdest old people in the world.” I shrug and pass him the popcorn.

So here I stand, ready to serve as your trail guide into the wilds of animé.

I don’t claim to be an expert, just a serious fan. I will say I’ve been with it long enough to move past the demon-fighting teenagers and to seek out some new frontiers. I spoke on French animé at LonCon 3, which startled my French co-panelist considerably. To her, Valérian and Laureline

was just a cartoon.

Which brings me to my first point. Do NOT let anyone tell you that animé is—by definition—Japanese, and that it is always SF/F. That’s simply not correct. If you talk to Japanese fans, they will tell you that the word animé means anything animated. Animation was invented here in the USA. Max Fleischer’s My Old Kentucky Home in 1928 was the first cartoon with sound. The sound didn’t work very well so Disney improved on it with a click track to keep the sound synchronized in his first ‘talkie’ cartoon, Steamboat Willie.

History lesson over. I simply want it very clear that animé doesn’t have to be Japanese. Yes, they took the concept and ran with it, but they’ve never denied they were inspired by the American work. And while they now dominate the field, they do not look down on the growing body of ‘O.E (original English) animé.’ You can see the American influence plainly in the first animé series, AstroBoy

, from the manga by Osamu Tezuka. (You might want to make a mental note of that name. Osamu Tezuka (1928-1989) is a very big name in Japan, “the father of manga” and the equivalent of Walt Disney.) 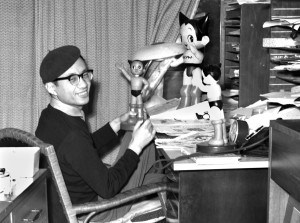 That’s a Japanese comic book. The ‘comic strip’ has always been a popular story telling style in Japan. Even newspapers frequently depict current events in pictures with speech balloons. You can get English translations of many manga

easily enough, usually sized more like books than American comics, with glossy covers, and all charmingly bound back to front, like Hebrew. They could probably rearrange the pages front to back at the same time as the translations are inserted. But they don’t. They just don’t. The fans don’t mind. They take it as a badge of honor that they are in on the secret.

I mention the manga because an enormous number of animé are based—and based closely—on popular manga. Case in point. In 2001, there was a manga called Fullmetal Alchemist

, a steampunk tale featuring the science of alchemical transmutation. The manga was so popular that in 2003, it was made into a TV show, animated of course. The show ran 51 episodes—which only took a year, since the Japanese airings didn’t take seasonal breaks. But halfway through the series the TV show caught up with the still ongoing manga, and took off on its own with new episodes. By the end of the show, the divergence in story line was extreme. 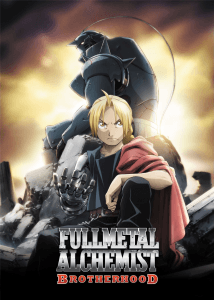 Two brothers search for a Philosopher’s Stone after an attempt to revive their deceased mother goes awry and leaves them in damaged physical forms.

The manga fans were outraged.

So in 2009, another series called Fullmetal Alchemist: Brotherhood

was launched. Again, the manga was still in production, but it concluded in 2010, before the animé series caught up. The new series, which concluded in 2011, was able to follow the manga faithfully from beginning to end. The fans loved the remake. They still do. And so do I.

This is my first whole-hearted recommendation for those who are just dipping their toes into animé. First and foremost, Fullmetal Alchemist: Brotherhood is a wonderful story, well characterized and engrossing both in action and emotional content. (Not to mention well drawn, which is always an issue in animé.) It is also a recognized classic in the field, a title you can use to start a conversation. Plus, it is not inaccessible. It stays close enough to live action SF/F so as not to bewilder the unwary. It does contain a number of common tropes (animé sometimes uses some rather odd imagery to express unspoken emotion) but not to the extent than an inexperienced viewer can’t easily keep up. So please, please, pick up a copy and watch it

. You won’t be disappointed.

There’s one more thing I should say about what animé is and what it isn’t.

I mentioned above that many people believe that animé has to be SF/F. Yes, there are a lot of demon infested high schools, giant robots, boy space pilots and ghosts and vampires crawling out of every corner. But that’s not all of it, by a long shot.

is dismissed as kid stuff, albeit for older kids. (Apparently, a preference for expensive live-action super heroes is supposed to cut in shortly after puberty.) As a result, very little of the mainstream animé is imported.

On that vein, I’ll offer another recommendation: Monster from the manga by Naoki Urasawa. This a chilling suspense thriller set in modern Europe, but with a story firmly rooted in the divided Berlin of the Cold War. Monster is dark enough to merit a mature audiences warning. There is nothing skiffy about it (unless you count the hypnotic charm of the serial killer). It takes 64 episodes to unravel the mystery, and—trust me—it will keep you guessing for the entire run. 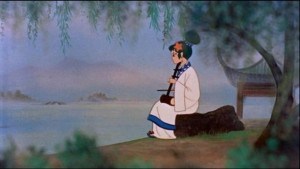 The Tale of the White Serpent was the first Anime cartoon ever created. Released in 1958, the animated cartoon followed an adorable panda, a dragon god and an evil serpent.

I suspect some of you are still doubtful. You’re worried about sub-titles.

Americans hate sub-titles. You’ve heard from the aficionados that you MUST watch the sub-titled versions. But that’s not really true. It used to be. When animé first started dribbling across the Pacific, the dubbing was done by fans and was amateurish in the extreme. So the fans made a virtue of the necessity, and declared a preference for sub-titles to be a mark of senior status. But that necessity is long gone. Excellent dubbing is widely available in the commercial market. (Of course, if you’re watching YouTube, you’re on your own.) I personally like sub-titles, but that’s just because I have very poor hearing. My husband likes the dubbing, and he’s just as serious an addict as I am.

Next time, I’ll try to address some of the early shows. Fear not, I won’t expect you to take much interest in 40-year-old TV shows, but I can steer you through them, and give you some hints as to which are foundational, which still quite watchable and which best forgotten. Please feel free to ask questions if there’s something specific you’re interested in—there’s even a possibility that I’ll know the answer! And if not, I can always call my friend in Chicago.