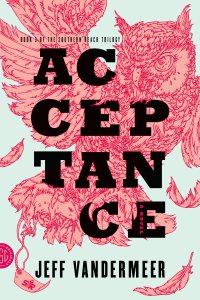 We crave answers. Both the scientific and spiritual fields have dedicated a majority of time seeking out answers. As humans, we are hardwired to want evidence, to find out what the truth really is. At times we locate what we sought only to find the answers unsatisfying. Other times we find the answers only to beg the cosmos to unknow, unlearn what we find. Sometimes, the answers come crashing at us with horrifying revelation testing what we think of as truth.

It is wintertime in Area X, an area that has been identified as unlivable and even dangerous to the outside world, and the border is expanding. The Southern Reach was the last guard between Area X and the rest of the world. It now lays in tatters after Area X grew tired on its constant poking and prodding. The few survivors of the attack (an outsider that is losing what is left of his mind, one who was pulling the strings before they were all cut, and someone who came back from across the border that the other two can’t trust) go off in one final suicide mission to find the truth. Everything we’ve learned so far pales in comparison, as the final layers of the mystery are unraveled.

The final installment brings the reader around in full circle. VanderMeer tells the story from three different points: before the event that created Area X, before the events of the first novel, and after the tremendous ending of the previous novel. Showing the town, the location, and the person that later becomes one of the primary spooky things was a bit of a risk. Strange and mysterious characters tend to linger in our mind because we want to know more than is there. When the artist goes back to show us it is generally disappointing (think Darth Vader). VanderMeer has done a great balancing act of giving us enough to satisfy some of our curiosity while keeping intrigue in the characters and story.

It seems as though VanderMeer either is really in tune with his readers or can read our minds as he went back and touched on everything in the previous two novels that we wanted fleshed out. While he employed the Shirley Jackson/Lovecraft unspeakable horror type descriptions in the first two books he did give us a more direct look at the things that were going bump, if only for a fleeting moment or two. Though again we got an after the fact description on a few things.

If you are looking for direct answers to everything that happened in the previous installments you’re going to have to keep looking. I’m sure there will be message boards with all kinds of fan theories (if this hasn’t happened already). If you’re looking for a well written series that will keep you up at night asking questions or having you flipping back through the books looking for answers (or flipping through his earlier work like I was), you’ve found it.

The Southern Reach Trilogy will infect the reader like a spore getting into your consciousness and germinate into new ideas. Like any good story, it will change the reader, lingering for a long time after finishing.

In the cold winter of Area X, a new team embarks across the border on a mission to find a member of a previous expedition; and as they press deeper into the unknown the threat to the outside world becomes even more daunting.