Right in Front of You, The Other Side of East

Modern American Anime: The Incredibles, WALL-E, Zootopia, and Kubo and the Two Strings

I sat down planning to talk about animé from the 90’s. Really, I did. And I still mean to get back to that soon, because animé from the 90’s is a lot of fun. But while I was thumbing through my DVD collection, looking for the most interesting material, it suddenly occurred to me that if my friends wanted to explore animé, there was no need to make them mine the past just to get started. There’s animé in theaters right now. I saw Kubo and the Two Strings at the Cinemark just last week. So there’s plenty of time to backtrack later, after they’ve gotten a taste for the stuff.

And having said that, I’ll backtrack again. Why backtrack? Didn’t I just say there’s animé in the theaters right now? But if I’m going to talk about current American animé, I simply must start with Pixar’s The Incredibles 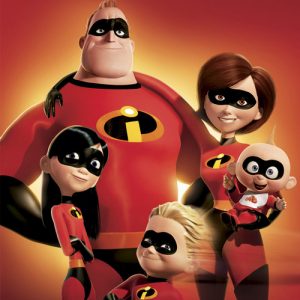 A happy family of super heroes

I haven’t forgotten I told you before that current American animé is aimed entirely at kids. And I stand by that. But . . . There’s kid stuff and there’s kid stuff. Some movies are aimed at very little children, and some are aimed at young teenagers. The Incredibles

is aimed at older pre-teens. There’s some mild flirtation, and some scary stuff, so you might not want to take a timid five year old. (When I was five, Snow White scared me silly.) But there’s nothing graphic or unseemly in it.

PG or no, The Incredibles is entirely satisfying to an adult audience. It grossed $633 million and won two Academy Awards, plus science fiction’s Hugo for Best Dramatic Feature. Experienced animé fans applaud the animation. Writer/Director Brad Bird (a name worth remembering) and his team invented new technology to render their characters more realistically human, and the visuals are glorious. 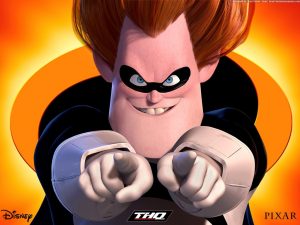 A villain who really hates superheroes

The characters are vivid and believable. The story, too, is smart and well written, exciting enough to keep you on the edge of your seat. Best of all, it’s wonderfully funny, but also serious, brushing gently but firmly on themes that many R-rated superhero films are afraid to touch.

Perhaps you’ve already seen it—even if you are just embarking on the adventure of animé. Did you like it? It’s hard to imagine you didn’t. So you see—you are already an animé fan! Wasn’t that easy?

Another popular Pixar film that may reassure you that animé, even American kid-oriented animé, is well worth your while is WALL-E

(2008). It’s aimed a little younger than The Incredibles, with its cute robots, and its rotund human spaceship crew, but it’s witty and clever, and addresses issues most of us can get solidly behind, i.e. conservation and waste management (not to mention evil corporate entrenchment). 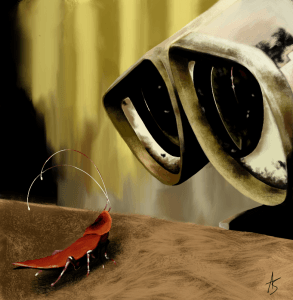 WALL-E with the world’s last survivor

I admit, I do know one adult woman who didn’t like it. (She’s my friend and I love her anyway.) She saw nothing the least bit funny about the devastation we are wreaking on the earth, and pointed out that the ending was too pat, offensively so, in her view. She’s right, of course. These are major issues which need serious attention. And yes, the ending is a bit pat. But the images of the ruined earth are genuinely disturbing, and even children can see that the happy characters dancing off the ship are in for a very rude awakening. I think that’s honesty enough for a kids’ movie. It won a lot of awards, I loved it, and I think you will, too. 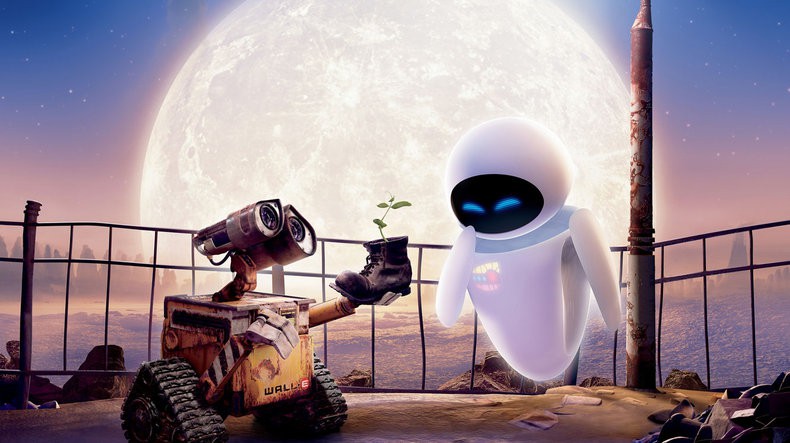 WALL-E gives EVA, the most precious gift in the world

Enough backtracking. I said I would bring you into today’s theaters, and I think Zootopia

from Walt Disney Animation Studios qualifies. It enjoyed a long, profitable run in the major theaters, and is still playing in second-run houses around the country. I hadn’t originally planned to see Zootopia at all. I thought it would be way too kid oriented. Talking animals, bunny cops. . . You can see why I had reservations. 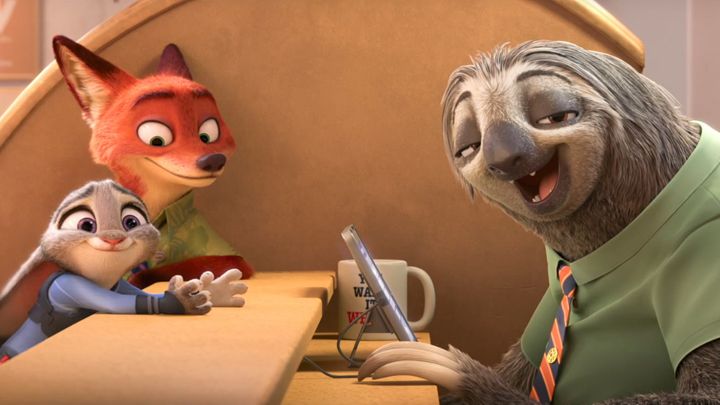 Bunny cop and friends get the job done

The Chief of Police chews out the bunny cop

But a very dear friend of mine informed me (in that passionate squeal only an eleven year old girl can produce), “IT’S THE BEST MOVIE IN THE WORLD!!!! I’VE SEEN IT NINE TIMES!!!” So my husband and I watched Zootopia. We liked it. We didn’t love it, but we liked it.

Yes, it was, indeed, very kid oriented. The line between suitable for kids and not suitable for kids can be fuzzy. Zootopia is guaranteed romance free. The Incredibles included a curvaceous lady spy. WALL-E contained hand-holding robots. But not Zootopia. (Possibly because so few of the characters were of the same species.) It’s still not for little children. There are some dark and scary scenes. There was no actual killing, but there is peril, and the mind control inflicted on targeted victims was almost as violent as murder and, in its way, even more horrifying.

The only social issue the movie addressed was bigotry, and that not very effectively. The ‘us vs. them’ rhetoric got a little strained in a society comprised of dozens of species. In the end the message deteriorated to ‘Everybody should just try to get along’. The size difference between characters was mostly played for laughs, but over time it became difficult to avoid noticing what a problem it should have been. And since the whole story revolved around the peaceful coexistence between former predators and prey, one couldn’t help wondering what the enlightened predators ate, if not prey.

None of which means that the movie wasn’t entertaining. There was a mystery to solve, and that kept things moving nicely. The voice actors really earned their paychecks, bringing so much conviction and authenticity to the characters that you accepted them completely, even if they were cartoon animals. Take my word for it, Idris Elba is just as intense and intimidating as a water buffalo, as he is as a heavily armed homicide detective. Tommy Chong can’t NOT be funny. It’s not an adult’s first choice in entertainment, but it can make for a pleasant evening. 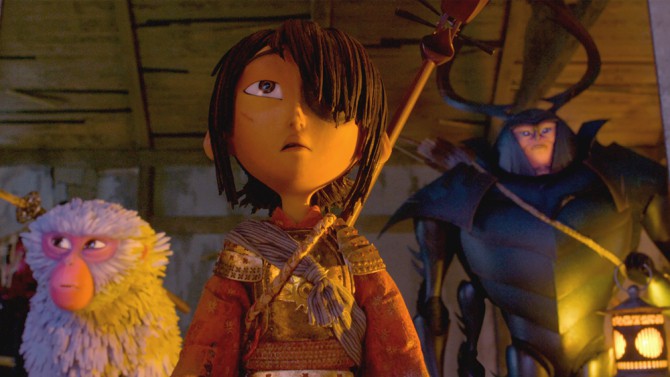 Kubo and the Two Strings

Which brings me at last to the movie I ditched 90’s animé for: Kubo and the Two Strings. First and foremost, Kubo is NOT Disney. Not even close. You can see how different it is immediately. For starters, it’s not CGI—it’s stop motion. These are not drawings. They are graceful puppets.

Secondly, it looks Japanese. It isn’t. It’s from Laika and Focus Features. I couldn’t believe it myself. I stayed in my seat for every last credit, and this movie is American made, all the way down to the 2nd gaffer. There are some Japanese-American actors doing a few of the voices (most notably George Takei) but I checked them and they are all Hollywood regulars. On the other hand, the characters are all Japanese, the settings are Japanese (and authentically so!) and the story is Japanese. 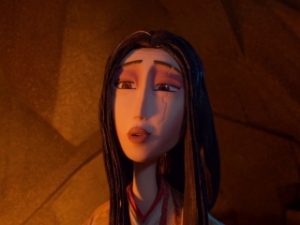 The animation is breathtaking, from the very first frame, when the credits DON’T come up. The screen opens on a vast panorama of surging, roiling blue and green waves. Then a tiny boat—just a skiff, with no sails, and barely room for one woman carrying a bundle—appears in the maelstrom.

Remember the scene at the beginning of Star Wars: A New Hope (before we knew there would be others)? Princess Leia’s little ship darts ahead, and then Darth Vadar’s enormous pursuing battle cruiser absorbs the entire screen. It’s like that. The entire screen is raging water. The woman is surely doomed. And indeed, her frail craft capsizes, and we see her dashed down to strike her head on the rocky sea bed. Yet even as the audience grips the arms of their chairs, there is a gasp of admiration at the sheer magnificence of that angry sea. 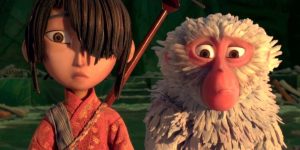 Fortunately, the woman is not far from shore. She is washed up on the beach, to lie limply. It is not until the bundle she carried is washed up nearby that she moves. She crawls slowly, her face dripping blood, to turn down the blanket and reveal her baby. The baby starts to cry. Only then do the opening credits start to roll.

When we see the pair next, they are living in a cave. Kubo is a cheerful, high-spirited little boy, with a mop of hair hanging over half his face. You almost don’t notice that he’s missing an eye. His mother seems well, save for a nasty scar down one side of her face. But we see, as the story progresses, that she’s not quite right in the head. Kubo doesn’t complain. He dashes down the cliff to the town every day, to earn his living playing his lute and telling stories. In the late afternoon—always before sunset, even if his story isn’t finished—he returns home with food to take care of his mother. 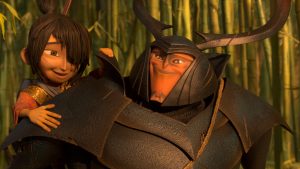 The two have magic powers, which is doubtless crucial to their survival. His is primarily telekinesis. Hers are more mysterious, but they start with giving her son magic paper that restores itself after it’s used, no matter how crumpled or torn it’s become. Little Kudo supposes the magic is mostly in the paper, but it is he that shapes the pages into marvelous origami figures that illustrate his stories by dancing and fighting while he plays. The villagers are always disappointed when he goes home at night, but he is happy to go. If his mother is well, she will tell him more stories about his samurai father. And if not, she will need him.

You already know the basic story well. One night he doesn’t make it home by sunset. The powers of the moon discover him and come after him, destroying everything in their path along the way. To save his people, he must go on a quest to find his father’s magic sword and armor. 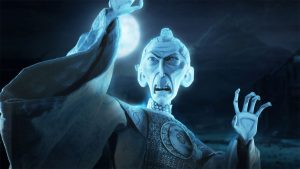 I admit, I got a little nervous at about this point. Magic powers or no, Kubo’s just a little boy. I didn’t want to see him turned into a bad-ass fighter. And I am delighted to report that is not what happened. Although his magic is very useful, he is not transformed into a fighter. He acquires powerful allies to do the fighting for him. And fight they must, against cold, witchy villains who are not so much evil as completely indifferent to humanity.

I confess, the story isn’t perfect. There are moments when it drags slightly. There are places where it gets a little muddy. But these are not deal-breaking sins. They simply provide a few breathing spaces, allowing the beauty of the imagery to shine through the action. It’s still a wonderful movie. And it’s probably still playing near you. Go see it! Don’t bother waiting for the kids to ask, just go.