An Interview with RUSSELL T. DAVIES
Creator of TORCHWOOD, QUEER AS FOLK, and producer of DOCTOR WHO
By Abbie Bernstein 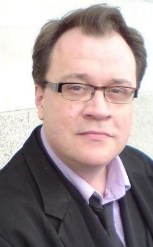 Russell T. Davies, creator of TORCHWOOD and QUEER AS FOLK, producer of DOCTOR WHO for the Christopher Eccleston/David Tennant years of its current revival, is at a Television Critics Association press tour party for BBC America at the Langham Hotel in Pasadena. He and David Tennant have already done the big Q&A panel for their mutual final season of DOCTOR WHO, which will go on with a new Doctor and a different showrunner. Davies asks his assistant to bring him a glass of orange juice while he talks to several journalists, including yours truly. The others, who’ve been talking to him for awhile, detach themselves to talk to other BBCA talent at the party, leaving me to converse with Davies solo.

For starters, Davies states his policy on spoilers – like most showrunners the world over, he’s against them. “I know we’re here to publicize these shows, but I really don’t believe in giving too much away, because I think so much is given away these days about television and films that by the time somebody gets around to seeing them, they feel like repeats.”

Being vigilant against spoilers has resulted in some very specifically-edited trailers for upcoming episodes, Davies adds. “Well, we argued over [the clips used in the trailers] long and hard. There’s an editor called Thomas back in London at BBC Cardiff who put those together. And we went over them twenty-seven times, every time saying, ‘No, take that out, no, take that out.’ I know science-fiction fans are very, very clever. You can show them one character, and if he’s hiding something in his hand, they’ll guess what it is, and if he’s hiding something, they’ll guess why he’s hiding something and therefore there’s nothing at all left [that they haven’t surmised]. I’ve seen them do that. It’s such a literate audience, all you really get in those Christmas [episode] clips are faces. Literally, we’re just showing you who is in it – we daren’t show any more.”

Timothy Dalton narrates the trailer. Will he be seen in the episode? Davies is cagey about this as well. “He’s playing the Narrator – you’ll just have to see,” he laughs. “You’ll have to wait ’til December. I really don’t believe in giving out information too soon.”

Indeed, Davies won’t even say if Tennant’s final episode as the Doctor will include a regeneration into the next Doctor. “That’s what typically happens, but maybe it’ll be different this time. I’m literally not even giving that away.” As for the selection of Tennant’s successor, Davies says he did not have a hand in it. “I didn’t pick the new Doctor at all. That was the new production team. They were completely in charge of that.”

As David Tennant played the Doctor over three seasons and several telefilms, did Davies began to write for Tennant’s voice as an actor? Davies gives a somewhat surprising answer. “The moment you start to know someone’s voice, that’s when it starts to turn into something different, because I think that can lead to very lazy writing. I can deliver something that automatically fits his speech patterns very well, almost on autopilot. That’s when you [have to] start doing stories like when the Doctor became human for two episodes, or like that ‘Midnight’ episode with Lesley Sharp, where he loses his voice – you actually need to guard against knowing an actor’s voice too well and need to look for new stuff. Otherwise, I think the writer gets bored and I think the actor gets bored. Once you know what they’re going to do, look for something different. Of course, David is just limitless, and so anything you do, he matches it, he takes it even further than you ever imagined, so it’s a great process.”

In Britain, DOCTOR WHO started life (almost fifty years ago now) perceived as a children’s show. While it’s clearly grown up a lot over the years, it’s still shown in the country that makes it at a relatively early hour, compared to Davies’ spin-off creation TORCHWOOD, which has adult sexuality, violence and blood. Did the BBC ever tell Davies there were things he shouldn’t do on WHO? “There were no edicts as such. There was my own common sense as a producer. For example, on DOCTOR WHO, I don’t believe in showing blood. We very rarely shown any blood – on a very violent show, there’s no blood. That’s not in the BBC guidelines. We’re not a children’s show, we are a primetime drama. Technically we’re allowed to show blood – I don’t think that’s right when there are children watching. So that’s not a BBC edict – they’ve given us absolute freedom and trust and faith, and the budget to go with it, so we’ve been very, very lucky. And obviously TORCHWOOD goes out later and is more for adults, so we have the freedom to go further. But even then, it’s all common sense.”

There were certainly no edicts about TORCHWOOD’s pan-sexual time traveling hero Captain Jack Harkness, played by John Barrowman. Davies says that, even though it doesn’t enhance his reputation as a pioneer, he actually didn’t have to fight for anything in that regard. “I would like to make myself sound brave in the creation of the character – actually, no one ever stopped me doing anything with him. That’s partly because I wrote QUEER AS FOLK, so I have a sort of defensive shield around me when it comes to gay characters,” he laughs, “so you will not criticize [the script’s handling of] them, but I don’t think anyone ever wanted to criticize them. No one ever stopped that happening. And we thought, ‘Bisexual space captain at the heart of a family show …’ Never have we had a single complaint, never have we had to take out a single line of his. And that’s just brilliant – I love that.”

At the end of the most recent installment of TORCHWOOD, CHILDREN OF EARTH, Davies broke up perhaps the only continuing gay couple on genre television, Capt. Jack and Ianto, played by Gareth David-Lloyd, when Ianto died heroically. When Joss Whedon did something similar on BUFFY, THE VAMPIRE SLAYER in killing Amber Benson’s character Tara, there was a tremendous backlash. Granted, as Davies just pointed out, as creator of QUEER AS FOLK, and as an openly gay man himself, people are less inclined to question his choices with gay characters; things might have gone differently after Tara’s death if Whedon had been a lesbian. But was there any sort of audience uprising at Ianto’s passing? “It was utterly expected,” says Davies. “I saw that coming a mile off, I knew that would happen.” However, he adds, “It was very small. There was a campaign to send coffee to the BBC, because Ianto was the coffee boy. At the end of [the week CHILDREN OF EARTH aired on BBC America], the BBC office in Cardiff had received nine packs of coffee, so that’s not exactly an overwhelming campaign. And actually, to be honest, if we’d received nine million packs of coffee, I wouldn’t change my mind. I think people get confused with reality television these days, they think they can vote to keep a character alive. They think they can ring 091 to save Ianto’s life and 092 to lose Ianto’s life. That’s not the case. It’s a drama. It’s not about who lives and who dies, it’s how they live and how they die, and that’s my decision. I thank people for their compassion and their concern, but I also hope they will take that compassion and concern and turn it to real-life stories of real homophobia where real gay men have been murdered in all sorts of extraordinary circumstances, terrible circumstances. If you want to get on the bandwagon about that, there are a lot of real causes out there with people in desperate circumstances.”

Davies says he’ll be back with TORCHWOOD, provided that the series returns. “It’s too early to say whether TORCHWOOD’s coming back. There was a report saying that I said at Comic Con that it was definitely re-commissioned, which I didn’t. That’s just people making things up,” he laughs. “I hope it will and the signs are very good, because it was so successful.”

The reception for DOCTOR WHO and for TORCHWOOD at the July San Diego Comic Con was a bit larger than Davies or the actors had anticipated. “I’ll tell you what it was. The crowd was wonderful. And it is Comic Con. So to some extent, it was expected, but we sort of thought that every show was that big, until we read all the blogs and all the reportage afterwards. I thought you could have been in LOST IN SPACE in the nineteen-sixties and walked on stage and got the same kind of applause. Which I’m sure a lot of people would, but we were taken aback by that. Literally, you get told back home,” Davies adopts the bored, posh accent of someone who can’t be bothered at all with science fiction, ‘Oh, it’s very successful in Great Britain.’ DOCTOR WHO is very successful in Great Britain. The only way people can put it down is saying, ‘Yeah, but it’s not very popular in America.'” The thousands of people packed into the Comic Con auditorium gave the lie to that fallacy. Additionally, “It gets seven million viewers in South Korea. We thought this [the U.S.] is the one audience we were lacking. Obviously, I’d like to triple the figures by the next episode and then triple them every showing after that, but we’re really delighted to have this conversation and you know what we’re talking about. I don’t have to explain it from scratch, which is wonderful.”

Looking back, what would Davies say has been the most unique aspect of his tenure on DOCTOR WHO? “I’ll tell you that very simply. If you look at my mobile phone, I have got the greatest actors in Great Britain on my phone, David [Tennant] and Catherine [Tate] and Billie [Piper], and guest stars like Penelope Wilton and Lesley Sharp and David Morrissey, and young talent, like Lenora Crichlow, who’s on BEING HUMAN, Russell Tovey, who’s on BEING HUMAN – they’ve been in DOCTOR WHO. People always talk to writers about the writing – people never talk to writers about the actors. Half our life is dealing with these people who take our words and say them on screen and there’s a real impenetrably magical chemistry there. I have had the best time. Simon Callow, Derek Jacobi – simply the best talent in the world. So that’s been the most magical thing, that people are dying to do DOCTOR WHO. You just look through the history of not only our regulars, [but] everyone [who’s appeared on the series]. That has been spectacular. I loved it.”