Anna is a Microbiologist by day and the award-winning author of “The Majat Code” series by night.

JMW: Hello, this is Jean Marie Ward for BuzzyMag.com. With me today is Anna Kashina, the award winning author of “The Guild of Assassins

“, the second book in the The Majat Code

JMW: We’re so glad to have you. And, congratulations on your big double win in this year’s Prism awards. That’s a doubly big tribute to “The Guild of Assassins” which is the second book in the series, something that’s usually a hard sell at awards time.

JMW: What quality in the book, do you think, most resonated with readers, especially the romance readers who voted for that, those Prisms?

Anna Kashina: Well, actually this book is my first true romance that I ever wrote, and it was driven by the characters who literally fell in love as I wrote the story. So, I think what resonated with readers was how natural the love story happened because I actually didn’t plan it this way.

Anna Kashina: No. So, in the previous book

, the main character was in love with another man.

Anna Kashina: But, a new man emerged who was just her perfect match in every way. So, in “The Guild of Assassins

“, they get together and up until then, I was leaving it open for them because I knew I was going against the conventions by changing the love interest in a second book. But then, nothing I could possibly do could keep them apart. And, I think that just the way it flowed so nice really it resonated with me and hopefully, with the readers. So yeah, I was thrilled to win those two awards.

Anna Kashina: For my very first romance that I ever wrote.

JMW: That’s just so fabulous. Do your characters usually take over or was this the first time for that, too?

Anna Kashina: Well, they do in occasional scenes, and I have to say that, the man male character in “The Guild of Assassins“, the one who was also on the cover, his name was Mike, he was amended in the first book almost as a plug device. Because I needed some believable character who could defeat the main character as a warrior.

Anna Kashina: But then, he turned out so well that he took over very early on, so in every scene that I wrote with him, he started acting on his own. So, I ended up just watching and wondering what he was going to do when presented with a situation. And, I think this is what drove us, and then by the end this book, he fell in love with this woman. And, I couldn’t do anything except just let him pursue her and see what happened.

JMW: What was the genesis of the series?

Anna Kashina: It was my first, I always wanted to write a big, epic, traditional, adventure fantasy. And so, when I started, I kind of started with all this world building and developing of the magic systems, and then developing the characters. So, the original major character for this story didn’t end up being the major character for “The Guild of Assassins” actually. So, the story evolved, but overall, the whole trilogy will be kind of this big, epic fantasy which I hope will bring together the story “New Magic” that I was working on. I’m not sure if that answers your question.

JMW: Hey, works for me. Your day job is microbiology. Which came first? Your love of science or your love of storytelling?

Anna Kashina: Well, I guess they kind of developed hand by hand. So, I have to say, when I was six, I wrote my first novel which ended with a very romantic scene when the main characters ride off into the sunrise which happened in the west. So, when I gave it to my father, he pointed out that sun doesn’t rise in the west, and I was so devastated, I destroyed the story, but I kept writing. So, I have to say that I was writing since I was six. I became a science major later on, but I was always interested in science. So, I think to me those two things just have to come together. I think that people say there’s left and right brain.

Anna Kashina: And probably, just my brain needs to use both halves at the same time.

JMW: Do they feed each other, your storytelling and your science?

Anna Kashina: Definitely. Yes. The first, writing puts me into this state of mind. So, when you write a novel, you have to hear, there’s this point of time when you see it from beginning to end very clearly. And just this feeling, this very amazing feeling that helps me organize my thoughts. So, it feeds my science. If I am writing actively, I do better science. If I do good science, it helps my writing. Together somehow, yeah, I just need to have both in my life.

JMW: Good. Sounds like a wonderful balance. I was fascinated to learn you published your, published your first book while still in high school. Will your American readers ever see that novel since it was in Russia?

Anna Kashina: Well, possibly. It needs to be translated first. And, this novel was historical fiction. So, it’s not fantasy. So sometimes, I contemplate translating it myself. There was a lot of research that went into this novel, so when I think of all the groundwork of translating all the historical quotations into English, I usually stop, but someday hopefully, it will happen.

JMW: So, you do translate your own work. Do you think in English or Russian?

Anna Kashina: Right now, in English. I wrote my very first novel published in English in Russian. Then, I brought this huge dictionary and translated it into English word by word.

Anna Kashina: So, somewhere in the process of this, my thinking switched. So, now I think in English, but I think if I start reading in Russian, I start thinking in Russian. When I’m writing actually, I’m careful not to read in Russian because then I switch.

Anna Kashina: Yes, but sometimes when I write I do put Russian words in when I’m thinking of a word, and I can’t think of the exact one right now, and I thinking of the Russian one, I’ll just put it in in Russian and come back to it later.

JMW: Now, who is Ann Porridge

and where did she come from?

Anna Kashina: Well, it’s an exact translation of my name from Russian into English. So, Anna Kashina, Anna and Ann are kind of similar. So, the word, porridge, my last name comes from the word porridge. I think it came as a joke when we were reading a translation of “Lord of the Rings” from English into Russian, and that translator translated all of the names into Russian words, and it sounded hideous. So, my father said this, he said “Instead of Anna Kashina, you will say Ann Porridge.” It was very funny, but it stuck.

JMW: Have you written anything under that name?

Anna Kashina: Well, only this one novel in Russian, Ann Porridge

JMW: Ah, so that’s who she was. Okay. What are you working on now?

trilogy. So, I’m just about finished with my first draft.

Anna Kashina: And it’s coming out next year.

JMW: Okay, great. Okay, we’re coming up against the end of the interview, and we always finish with the same question. Is there anything you’d like to add?

Anna Kashina: Well, no. I just, I guess thank you for the interview.

JMW: Thank you for being interviewed. And thank you, viewers, from BuzzyMag.com.

Learn more about
Anna Kashina
by Clicking around Below! 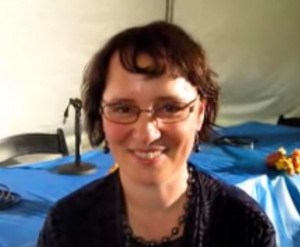