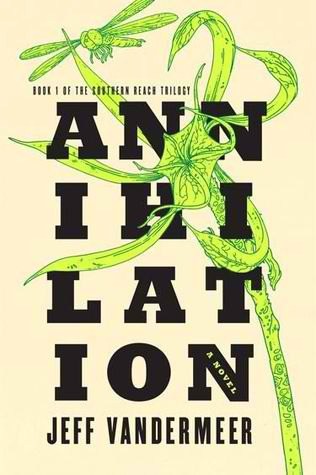 One has to wonder, if the Earth will one day get sick of us dumping things into it, drilling things out of it, and just being a pest to it in general. There are a lot of ways for it to fight back: earthquakes, volcanoes, and tsunamis to name a few. But what if it fought back a little more subtly but much faster than the greenhouse effect.

Area X has been deemed unlivable and dangerous. A border has been set up to keep something in and keep people out. Expeditions are sent in. The first reports a paradise untouched by human hands. The second ends in a mass suicide. Further expeditions lead to various terrible results. One thing is clear, something changes you when you go in and what it makes you is dangerous. After months of conditioning and training, the twelfth expedition goes in: all female this time and no names are given. Our protagonist, the biologist, becomes fixated on a tower that is buried in the earth and not on any map. She finds a way to step outside the trappings of Area X and starts to realize that all expeditions are not what they appear and are doomed from the start. The group that sent them in lied to them, but that may not be the only lie. Their entire lives may not have happened until they crossed the border into Area X.

Jeff VanderMeer is a pioneer of the New Weird and again offers up an amazing, intriguing read. More structured writing than his previous novel, Finch (Underland Press, 2009), Annihilation grabs you right from the start with questions. The answers come, but a more compelling question is asked immediately afterward. It has a similar feel to it as At the Mountains of Madness by H.P. Lovecraft. By that I mean that a great deal of action happened before the characters arrived and they have to piece it back together while strange things are happening still. Also in the fact that VanderMeer uses our familiar world but shows us how alien and unusual it can be. The protagonist, who is never named, was an interesting choice. She is an extremely dislikable introvert. But it is all the characteristics that make her an undesirable person that in turn make her thrive in Area X.

One criticism about the book is its length. It is very short and is the first part of a trilogy. Knowing this the reader can’t help but think that the trilogy is just one book that is broken into three pieces in order to sell three books in place of one. However the next two books are longer, if put together they would be over 800 pages, and City of Saints and Madmen (Tor, 2004) was a whopping book that could have easily been split up into multiple books and wasn’t.

I’ve been a fan of VanderMeer since I first stumbled upon him years ago. It is hard to look forward to his new work, as he tends to change his writing style with each piece. But his work has an underlying feel to it that begs you to keep reading. He, and fellow New Weird writer China Miéville, force our brains to work in different directions, opening up worlds to us that would otherwise remain hidden.

Describes the 12th expedition to “Area X,” a region cut off from the continent for decades, by a group of intrepid women scientists who try to ignore the high mortality rates of those on the previous 11 missions.