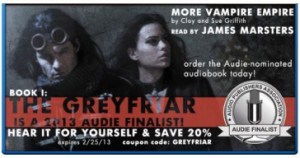 Buzzy Multimedia’s 10-disc unabridged audio production of Clay and Susan Griffith’s novel “Vampire Empire: The Greyfriar,” performed by James Marsters, has been nominated for the prestigious Audie Award in the Paranormal Audiobook category.

The Audies are the awards bestowed by the Audio Publishers Association (APA), a not-for-profit trade organization. The award ceremony this year will be held in New York City on May 30.

“The Greyfriar,” originally published in print in 2010, is the first in the Griffiths’ trilogy about an alternate world where humans rule the southern hemispheres but vampires hold sway in the north, with both rival species battling to expand their reach. A human princess and a vampire prince form an unusual bond that may save or destroy both their kingdoms.

The Griffiths, a writing team who are also a married couple, have been working together for more than a decade. In addition to the “Vampire Empire” series, they have had other novels published in print by Bantam, Doubleday, Dell and Pinnacle Entertainment. Additionally, they have authored numerous short stories, television scripts and graphic novels.

Actor Marsters has previously worked with Buzzy Multimedia before, having recorded the first four books in Jim Butcher’s best-selling “Dresden Files” series for the company. Marsters is known for his onscreen work as the vampire Spike in seven seasons of “Buffy the Vampire Slayer” and “Angel,” as well as many other performances; he also performs live and records with the band Ghost of the Robot.

North Carolina-based Buzzy Multimedia, headed by Joy Poger and June Williams, specializes in producing unabridged audio books in the fantasy and science-fiction genres, with works from authors including Patricia Briggs, Alan Dean Foster, Jim Butcher and Sarah A. Hoyt in their catalogue. The company is currently in post-production on Marsters’ performance of “Vampire Empire: The Riftwalker,” the second book in the Griffiths’ series.