Blood Bound is the 2nd installment of the Mercy Thompson series

A new Vampire has created turmoil in the tri-state area with a string of murders. Mercy must use her shape-shifting powers and immunity of Vampires to save her friends and city. 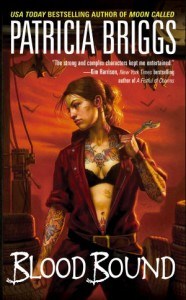 One of the perils of a science fiction series – or any other media – is the so-called “sophomore slump”. The period when the audience is still in love with the world the character has created, yet it is obvious that sequel, or sequels, aren’t as good as the original. Novels plod along at a slower pace, and situations that used to be interesting no longer have the same charm that they used to have.

Such is not the case with Patricia Briggs’ follow up to Moon Called. This paranormal action-fantasy still delivers a dropkick of adrenaline to the senses, and that’s all that matters.
Blood Bound

is set several months after the events of the first book. Things have changed for Mercy and her friends. Her ex-lover, Samuel, has moved into her house as a roommate. Her best friend, Adam, has become the point man for the werewolves coming out party.

When a string of mysterious deaths occur in the Tri-State area, she is enlisted in the campaign to find the source. No longer standing on the sidelines, Mercy finds herself front and center in the effort to keep them from becoming a trend. Taxing her resources – both supernatural and otherwise – the shape shifter criss-crosses the state in search of the cause of the untimely deaths, only to come face to face with what can only be described as true evil.

Despite the suspense of the novel, the pace of the book is neither plodding nor is it speeded up. Though the cast of characters are varied and complex, Briggs spends little time filling the book with flashbacks, and backstories. It is as though the author has finally come to terms with the characters, and trusts her audience to do the same.

There are moments where territory Briggs covered thoroughly in Moon Called are repeated by Mercy herself who reminds the reader of the reasons werewolves are dangerous but I suppose this is to inform the uninitiated reader about this world. The action of the story makes up for such deficiencies.

Blood Bound is thoroughly entertaining. If you enjoy paranormal tales with vampires, Shapeshifters, ghosts and other creatures that go bump in the night and you are more interested in a story rather than endless sex scenes where the heroine is the object of every living or undead character in the book, you have a winner in Patricia Briggs’ Mercy Thompson series.