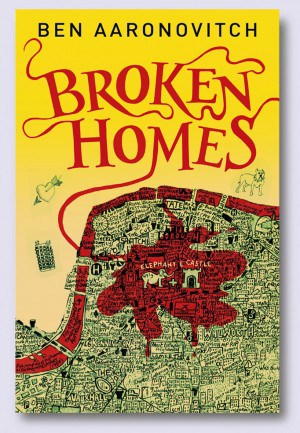 If I had to sum up this book in one sentence it would be “I did not see that coming.”

Broken Homes is the fourth book in Ben Aaronovitch’s urban fantasy series Rivers of London. The first two books were excellent, but the third book, Whispers Underground was something of a disappointment. Broken Homes isn’t just a return to form, it’s a new high for the series. Not only that, but the fourth book gives so much context to what happened in the third book that it makes Whispers Underground a much better read, almost as if they were two halves of a much bigger book.

In Broken Homes, Peter Grant, erstwhile London copper and apprentice wizard, is still struggling with his dual identities and trying to make the best of being apprenticed to old school British magus Thomas Nightingale. Things have gotten better for Peter since his friend Lesley May has joined him as an apprentice, and together with Toby the magic sniffing dog and Molly the world’s most disturbing housemaid they make up the occult division of the London Police Force.

All of Aaronovitch’s Peter Grant books are love letters to London, and Broken Homes is no exception; there is a lot of loving description of parts of London that will be unknown to anyone who doesn’t live there. Aaronovitch manages to weave the scenery into the story in such a way that it adds to the rest of the tale, and it gives Broken Homes the feeling of being very real, despite the assorted river fae, tree spirits and wizards running around.

Peter is his snarky best throughout the book in spite of, or perhaps because of, being in constant peril. His dialogue with Lesley and Nightingale is some of the best I’ve read in some time. He also feels like a real character; competent while still being quite capable of screwing everything up. If anything, Lesley’s hyper intelligence and wit play very well against Peter’s and the two of them make for a formidable team.

I was also pleased to see Peter’s mentor Nightingale with a lot more to do in this book, and we get to see him really cut loose with magic later on in the book. It’s handled with style and Aaronovitch allows Nightingale to retain some of his mystery even as he’s revealing a lot about the character.

Perhaps where Broken Homes succeeds the most though is with the antagonists. While Whispers Underground suffered a bit from a lack of a sense of threat, Broken Homes is filled with a palpable sense of menace throughout. For all Nightingale’s power and Peter and Lesley’s skills as Police it feels as if they are all fighting a losing battle against powers they barely understand. This is especially true in the final chapters as readers are shown just how bad things can get.

Finally I do have to mention the twists. At first it looks like there’s just one big reveal at the end, but on a second read through there are several major plot twists that change the way I looked at the world that Aaronovitch has built throughout the series.

I think it’s worth rereading Whispers Underground if you haven’t already before starting this book, as the two add a lot to each other. You won’t be completely lost if you start with book four of Rivers of London but you will get a lot more out of it by reading them in order.

Broken Homes is one of the best books I’ve read this year. Highly recommended.

Constable Peter Grant, a magician and keeper of the flame, must discover if a mutilated body found in Crawley is the work of a common serial killer or an associate of the evil wizard known as the Faceless Man.