JMW: Hello. This is Jean Marie Ward for BuzzyMag.com. With me today is author and sailor, Bud Sparhawk. Welcome, Bud.

Bud Sparhawk: Glad to be here, too, Marie.

JMW: We’re so glad to have you. Aside from our feet, sailing probably qualifies as humanity’s oldest form of transportation. What inspired you to make it the basis of your most recent science fiction novel, “Distant Seas

Bud Sparhawk: Actually it stems from two things. David Nordley wrote an article in Analog years ago on surface gravity, and he included in there the equations for figuring out what the surface gravity would be at such and such a distance from a planet. When I did the math, I found out that the sphere of two gravities around Jupiter was still in Jupiter’s atmosphere. So that laid the grounding for so I’m going to write a story that takes place in Jupiter’s atmosphere.

And back in the ’70s, I wrote a little story called “Alba Crystal” that presupposed a bunch of miners going down around a giant planet into their atmosphere and retrieving the meteorites that were floating around. So I pulled that idea out and came up with a combination dirigible submarine as a ship that would sail on the viscous layer at the two gravity point, and then the story kind of wrote itself on there. There was a lot of technical stuff in there. Now, the evolution of the novel…

JMW: Yay! Let’s show that for our viewers.

Bud Sparhawk: Yeah. The evolution of the novel came about because I wrote a story called “Primrose and Thorn” which was basically about a sailing race on Jupiter. Later on, I wrote a one-off story about one of the characters in there, the way he got his ship. Then I wrote a long story about around the world sailing challenge on Earth, single-handed sailing. And I tried to sell it to Analog, who didn’t want to buy it because there wasn’t enough science in it.

I tried to sell it to Eric Flint and he says, “I love this story. I want to print it, but the story I really want to do is this one you mentioned,” because they were sailing in order to get a position on the Jupiter sailing race. He said, “I really want to buy that story.” And I said, “Well, I wrote that back in the ’90s.” He said, “Well, I’ll take it as a reprint.” I said, “Do you want the sequel?” He said, “Oh. Was that published?” I said, “Yeah. In Analog

I said, “Do you want the one-off story about one of the protagonists? It’s different.” He says, “Has it been published everywhere?” And I said, “Well, it was in a personal collection.” He said, “I’ll pay you the rights on that.” He says, “Is there any conclusion to this?” And I said, “No.” He says, “Can you write me a novella in three months that ties all the storylines together?” and I said, “Sure, I can, Eric.”

Bud Sparhawk: And then I had my right hand worked on, surgery, like this, and could not write for a period of about two months. And in that time, I composed the entire story, the fourth part of the story, in my head. So when the cast came off, I could sit down and just type it in one big go.

And that’s where this novel came from, it’s putting all these things together. And I had to do a little stitching here and there to make the characters consistent and some of the terminology the same, but basically it’s sort of a make up novel. Not really a novel novel. Even though now that I read it, it does read like it’s a continuous novel.

JMW: That’s great. And Eric was happy, I take it?

Bud: Eric was very happy with it, yes. As a matter of fact, when we had the Nebulas two years ago, we had an astronaut there and he sought me out and said, “I wanted to tell you I really enjoyed those stories, because I read them while I was on the space station.” And he wrote that on a photograph that he gave to me later on. .

JMW: Oooh. That’s so cool. I mean, astronauts. That’s why we write, isn’t it?

JMW: When we first met, you wrote mostly short stories, and the thought of writing novels made you shudder. But recently you seem to be writing more and more longer works, “Distant Seas” and some other things. What prompted you to make the shift?

Bud Sparhawk: When I started writing at first, it was hard to get over 4,000 words, and a lot of my early stories ended up between 4,000 and maybe 9,000 words. And then I started getting a little more wordy, I guess, and tried longer and larger subjects. And eventually, and I think this is within three years of after I got back to writing, I found that I could write a reasonable story at the 17,000 or 18,000-word level.

And that seemed to be a natural length. Michael Dirda has also said that the novella length, which is 17,500, is probably the best vehicle for a science fiction story because it gives you enough room for character development, a complex plot, and a situation. So there.

So I wrote novellas, and then I started my hand at writing various novels, and none of which I put out there. I basically e-published them after a while when they didn’t gain any traction. So this makeup novel is actually the second published novel. The first one was “Vixen

” which was published back in ’92, I think it was. No, excuse me. I’ve forgotten the date. But it’s on my website anyway.

JMW: There will be your website at the end of the interview, so not to worry, not to worry.

Bud Sparhawk: It’s hard for me to remember because my general point is I generally sell about 20% of what I write, and since I sell about 4 or 5 stories a year, I’ve got a lot of stuff in my trunk or in circulation, and it just keeps building up. And you’ve got to write a lot in order to sell a lot, so that’s basically it.

In a novel, you’ve got to put a lot of year in there or better in order to do it, and then it takes two to three years to get it even in print. So the short story? You can write it, get it out there, and get a response, see it in print within six months.

JMW: Yeah, so that it’s not quite immediate gratification, but it’s closer.

Bud Sparhawk: The check helps, too.

JMW: Yeah, the checks are good. I agree with that. Are all the novels that you’re circulating, are they all hard SF, or are you in other genres as well?

JMW: And do any of them feature everybody’s favorite hapless earthling, Sam Boone?

Bud Sparhawk: No, no. I put out a Sam Boone

collection, but I think that’s it. I wrote one Sam Boone after the collection came out, and I included it in the web version of it that I have on Amazon. But after that, I thought Sam Boone was pretty well tapped out. I couldn’t keep telling the same joke over and over and over and over. And he wasn’t hapless, he was a confidence man.

JMW: Well, there is that. But things always kind of went South for him.

JMW: Nothing ever worked out the way he planned. Speaking of jokes, though, you once said, in fact I think I read it on your website, that writing a short story was, in a sense, like setting up a joke. Do you find the same thing is true for novels or longer works, or do they write differently?

Bud Sparhawk: Actually, that’s an Algis Budrys comment that a short story is basically a joke. You have the set up, the exposition, and the punch line, and then perhaps a denouement at the end, denouement at the end on there. And you can expand that to say that short story starts with a small bit of exposition that precedes the conclusion by about two microseconds. Then you have three exposition scenes, try, fail, try, fail, try, succeed. And then the epiphany and then denouement, and you can write the whole story. And that is sort of a basic outline of how to write a short story.

A novel is… I think David Brin, when he first started writing longer works, he thought it would be just like writing a succession of short stories. And he quickly found out that that’s not the case because it’s more like braiding a whole bunch of independent stories into a complex net that then leads to a single conclusion, or not conclusion necessarily as in solution, but conclusion that satisfies the reader.

JMW: Mm-hmm. What are you working on now?

Bud Sparhawk: Well, I have my typical comment that I talk about on my blog is I’ve got probably five short stories that are in various states of development. I’ve got two anthology requests on the plate that I have to fulfill shortly. I’ve got two collections out for printing by a small press.

And I am working simultaneously on two novels, one of which is in the penultimate stages of being what I thought was the end of it, and then discovered I have to write another 20,000 more to bring it to a real conclusion. And the other one just seems to be an endless that I started in NaNoWriMo three years ago. And each fall, I devote 20,000 or 30,000 words to that, and it’s an ever-expanding task.

JMW: It’s going to be a series before it’s done.

Bud Sparhawk: I hope not. It’s just too painful.

JMW: Oh, dear. Well, we’re coming up against the end of the interview, and we ask our guests the same question at the end, is there anything you’d like to add?

Bud Sparhawk: No, I think that’s pretty much. I’ve said it all.

JMW: Okay, Great! Well thank you Bud, and thank you from BuzzyMag.com. 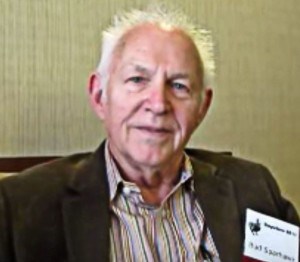 Bud Sparhawk has written an impressive number of published Science Fiction shorts, as well as novels such as Distant Seas and Vixen