Buffalito Buffet (The Adventures of the Amazing Conroy) – Book Review 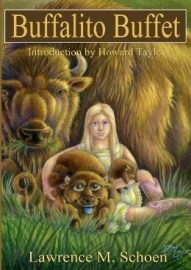 Let me introduce you to the Amazing Conroy, interstellar hypnotist and buffalito wrangler. What’s a buffalito? I’ll tell you. They’re an alien lifeform that look just like tiny buffalos–what’s more, they can eat absolutely anything, and then they fart it back out as oxygen. This makes them an incredibly valuable commodity.

The Amazing Conroy travels the galaxy, often in the company of his buffalito Reggie, eating fascinating alien gourmet fare, and occasionally running afoul of the local constabulary. Using his wits to keep himself out of trouble, Conroy’s adventures take him to wondrous places, to both the poshest suites and the lowliest slums, to bars and hotels and ranches far and wide.

collects many of the shorter tales featuring Conroy (there are also two novels, Buffalito Destiny and Buffalito Contingency). Some appeared previously as chapbooks, others in various magazines, and the novella “Barry’s Tale” is brand, spanking new. You’ll read about Conroy’s first meeting with buffalo dogs, far away from Earth. You’ll find out how he ended up doing stage hypnotism in various venues, swanky and not, across the galaxy. Conroy will solve mysteries, play games of chance, meet alien races, and eat the rarest food in the known worlds.

Of course, along the way, he’ll face off against dangerous men, on both sides of the law. Not to mention the dangerous women (and the not-quick-so-dangerous women). And the aliens of every possible description. Along the way he’ll find out which races make good hypnotic subjects, and which ones not so much. But regardless, he’ll always put on a good show.

Schoen has a deft way with words, blending intricate descriptions with out-of-this world humor. He creates interesting worlds and cultures, complete with amazing cuisines. He takes you on a virtual roller-coaster ride with this collection, where each story leaves you wanting more (I know less is more–but I’m greedy!). My personal favorite in this collection is “The Matter at Hand,” which features a high stakes game of Matter, a game of chance where telepaths are allowed to compete. As a long time poker player, the explanation of this complex game, and the strategies involved had me absolutely riveted. I’m also exceptionally found of “Buffalo Dogs,” the story that opens the collection. It’s the tale where Conroy and buffalitos became inextricably linked together and it holds up well on re-reading.

The icing on the cake is the cover art (illustrating novella “Barry’s Tale”), complete with a blue-tongued buffalito. It’s absolutely adorable. You’ll wish you could have your own buffalito, or at least that you could spend some time with Conroy and Reggie, preferably at a restaurant. Conroy’s sure to know what the specialty of the house is.

For years, Lawrence M. Schoen has been producing stories about the ever more popular Amazon Conroy and his companion, a buffalito named Reggie. Here we present a collection of those stories, including a new novella, "Barry's Tale," which adds to the adventures of the hypnotist-turned-business-owner as he and Reggie travel the known universe, as well as beyond Human Space. Buffalitos are alien creatures that look like miniature bison and can consume anything. Their only waste product is oxygen. Which makes for limitless possibilities.