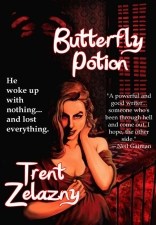 Perry is trying to remember what happened last night–he blacked out again, and all he can remember is bits and pieces. Senseless tragedy in his past has left him a broken man who drinks to forget, who welcomes the oblivion that alcohol can bring, who has become dependent on the good will of others to see him safely home when he is blind-drunk.

Trent Zelazny’s stealthy prose opens up a noir, nuanced world as you travel with Perry to solve the mystery of exactly what happened that night. On the way, Perry re-examines his entire philosophy of life, striving to understand where he comes from and where he is going. He is a man on a quest for the meaning of his life, and even though he doesn’t realize it, he is at an important crossroads.

As Perry retraces his steps, trying to solve the mystery of where he was, he is changing and growing–by the time he figures out where he was and what happened last night, he isn’t the same person. What seemed so important on the journey isn’t any longer. As he goes on his journey, Perry also examines his relationships with people he knows. He finds he is capable of more violence than he thought possible, in the search for his missing night. He delves more deeply into his friendship with Talia, an attractive woman he spends some time with. She is not what he expected at all.

Strong in symbolism, complex, and layered, this book will take you on an emotional ride as Perry tries to redefine himself in a world beyond his tragedy, beyond his blackout, as a stronger person. He starts to see himself through the eyes of others, and it catalyzes a change in him for the better.


This is a dark, gritty corner of our world populated with descriptions that are real enough that you are almost there. Read Butterfly Potion

to find out if Perry comes to terms with his past, and to get a glimpse of where his future is going. Recommended for an introspective evening’s reading with a snifter of good scotch.

All of the characters are very realistic–especially Perry. I felt I could go down to my neighborhood bar and find him just sitting there. He’d welcome me coming over for a chat. Of course, he’d be drunk off his ass . . . .

Perry wakes up in an arroyo, hungover and unsure how he got there. His wallet and cell phone missing, he walks back to the last place he remembers being before he blacked out-the bar. Fueled by alcohol and a touch of companionship, Perry is determined to find out who rolled him, but standing in his way is an accident that happened six months earlier and the struggle his life has become since. In his search for the material things taken from him, he risks walking right past something far more precious: A new beginning.