JMW: Hello. This is Jean Marie Ward for BuzzyMag.com. With me today is renaissance author, CJ Henderson. Author of The Knight Supernatural Investigator series. Welcome CJ.

JMW: Howdy. Congratulations on the release of the third Brooklyn Knight.

C.J. Henderson: Because that was one of the first books. As a matter of fact, I thought that it would have other titles after that but the publisher said, “No, no, no, it’s got to keep having place names”. And when I did Central Park Knight, I realized that “Okay, the location in the title will be where the big climax, the showdown is”. And so you’ll always know. So Radio City Knight, the third one that just got released today-.

JMW: Third one of the Supernatural Investigative series.

C.J. Henderson: So I knew it had to take place in Radio City Music Hall. And I know the fourth one is Coney Island Knight and yet, I know it starts in Europe.  But I write without an outline. I never know where anything is going but it always gets there, so Okay.

JMW: What kind of trouble has your hero, Piers Knight, gotten himself into in Radio City Knight?

C.J. Henderson: Well, in Radio City Knight, what you need to know is that the dimensional barriers are breaking down. This happens every so many millennia and the fabric between the universes is coming unraveled. In the second book, dragons appeared. We found out that yes, there were dragons in the world. The reason there was no proof, they only come through the gates every once in a while. Now is the time when all the gates are opening, so we got the dragons in the second book. In the third one, whatever it is that actually is Satan, Hell is opening up. And I tend to escalate things on my characters.

JMW: Yeah you do. So basically, you’ve got dragons appearing and the Gate of Hell are opening. That should keep Piers busy. You also have a rather interesting take, as I was hearing earlier, on people’s reaction to this. It’s not like people go, “Oh, yes. There dragons. You’ve got radio announcers and TV announcers going nuts”.

C.J. Henderson: Yes. I hate the kind of episodic television, or even series work, where something gigantic happens, zombies are going across the land, the creature from the black lagoon comes out, and then the next issue, the next episode, nobody knows anything. It’s all covered up. It’s all covered. I hate that crap. In Central Park Knight, where the dragons make their appearance, the government actually tries to cover it up. And this one 18 year old character goes, “Dude, there’s already 500,000 uploads to YouTube, from approximately 150 different angles. You can’t cover this up, sweetheart”.

C.J. Henderson: It’s a whole new world. Hello? My wonderful world of fans, I’m sorry. We live in the real world and I like to use the real world and the way things happen. For instance, for any of you that know Kolchak: The Night Stalker, I’m the person they had to bring it back. And when they had me redo it, it’s the same old Kolchak but now the car he drives is a classic. He still dresses the same way. He works on a computer now. He has a digital camera. And all the legitimate television stations and papers and such still say he’s an idiot. But, he’s an Internet sensation. On the Internet, it’s like, “This Kolchak guy, man. He tells the truth”. Of course, he’s embarrassed about this. Why do the lunatics love me? I like to take things that are given to me, that already exist, clean them up the way they should be. Not just change them because I’m incompetent and don’t know to do something the way it’s supposed to be done. In my own stuff, I like to have it be part of the real world. Am I technologically gifted? No. But I know people. And so I always try to get my facts right. A great mystery author and science-fiction and fantasy author, John French, is also one of the heads of CSI in Baltimore. For 34 years, he’s been on the streets getting all the facts. So all my mysteries, when I was doing Batman, every little detective detail was correct because I would go to the source. And I’m probably getting way off topic so why don’t I shut up.

Interviewed by Jean Marie Ward
Hear what else C.J. Henderson has to say! Watch the Video above! 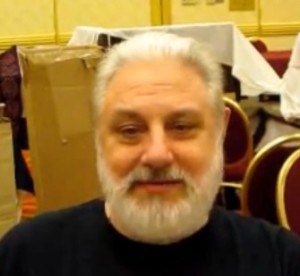 Learn More about him on his Wikipedia Page
Shop Cat Shirts @ Buzzy Tees!