Cecilia Tan: Welcome. Thanks for having me.

JMW: My pleasure. I’ve been looking at your bio on Wikipedia. I think you started writing and getting published at 8. How did you get into this crazy business?

Cecilia Tan: I always knew I wanted to be a writer. When I was 4½, maybe 4-years-old, you know how when you’re little, you always draw on paper and of course they always tell you ‘artists must sign their work’? You have to write your name on. I would be drawing; I would say to my mom, “Mom, how do you spell my name?” I knew the alphabet existed. She would say, “Okay.” I had learned to form the letters, of my name anyway. One day I was like, “Wait. There’s a trick to it,” because I’ve got a ‘C’ repeated in my name. I’m like, “The letters match to the sounds.” Basically, I had this moment where I taught myself phonics, and it just took off. I would take the paper and fold it in half and write the title, and on the inside, I would write words on one side, draw a picture on the other, and write ‘The End’ on the back. No one had taught me about spelling yet, so ‘The End’ was spelled T-H-N-D.

Cecilia Tan: That’s the way it goes. My mother has lovingly preserved some of these writing examples too, of when I was 4-years-old. I always considered myself a writer. My dad would say, “Are you sure you don’t want to go to medical school?” I’d, “No, Dad. Really, I don’t want to go to medical school. I’m a writer.” He made a deal with me. He said, “Any money you make from writing, while you live in my house, I’ll match it,” which was an extremely validating thing for me for him to say. That was his way of being supportive. I started selling articles to teen magazine when I was still in high school. Someone had given me the ‘Freelance Writer’s Guide’, an old paperback copy of it. I was like, “This is how you do it.” I would send a pitch letter, this, that, and the other. I started writing a monthly column for ‘Superteen’, which was $50 a month. I went to my dad and was like, “Dad, do remember that deal you made when I was 10?” This is why I didn’t have to have a part-time job like all my friends did; scooping ice cream, or working as a bank teller or whatever after school, because in the 1980’s, $100 a month from that right was . . .

JMW: Why? Not to be rude; what about that drove you to write that story?

Cecilia Tan: I’ll tell you. The thing is I grew up . . . I’m bisexual. I had basically at that point, just discovered the BDSM community. I had always known I was kinky, and had just always figured, “I’m going to have to somehow individually teach each lover the role-playing that I like to do in the bedroom and that would really turn me on.” Dating is going to be really difficult because you have to really recruit carefully. I don’t know. These are the idea you have growing up; you think you’re the only one. I thought I was the only bisexual in the world, I thought I’m the only whatever. Of course, that turned out not to be true. I had just . . .

JMW: You and David Bowie.

Cecilia Tan: Yeah, me and David Bowie; we were the only two. I swear. Everyone knows he’s a space alien anyways.

JMW: That’s how it happened?

JMW: What has been the biggest change in the 21 years since you founded Circlet Press, in the publishing landscape?

Cecilia Tan: . . . seen with science fiction or romance novels. People feel judged for what they read. I think the younger generation feels less judged about it.

JMW: You can tell the book on your Kindle anyway.

Cecilia Tan: When you buy a digital book, yeah, nobody can tell what you’re reading. You could be reading the New York Times, you could be reading the latest number 1 New York Times Bestseller; which brings me to the subject of ‘Fifty Shades of Grey’. The other big change is that all of a sudden, the Number 1-selling book in the English language is this supposedly extremely kinky BDSM book, which has suddenly opened the conversation. People are allowed to talk about that fact that people like kinky books and that kinky books exist, and so forth. The funny thing is ‘Fifty Shades’ is actually fairly vanilla by my standards. I think many people buy it thinking they’re going to get a really, really kinky book because that’s its reputation. Then they get disappointed as they go on and on in the book and it gets less and less kinky as it goes along. Hopefully, they get wrapped up in the romance and the characters. As far as real kink-per-page, it trails off. Of course, what am I doing now? I’m writing a 3-book BDSM Billionaires trilogy for a major publishing house because they are like, “We thing you can do it better.”

JMW: They may be right. We’ll see. Is that what you’re working on now?

Cecilia Tan: That is the big thing I’m working on now. The first book is out in e-book right now, it’s called ‘Slow Surrender’. You have to say it right: Sloooooow Surrenderrr. Here’s where David Bowie comes back into the story. I’m writing . . . the trilogy genre is called BDSM Billionaires, is what they’re calling it. That’s what ‘Fifty Shades of Grey’ was. It has to be a trilogy; just like when Tolkien came out. Now every high fantasy book has to have a trilogy; every BDSM Billionaire romance has to be a trilogy. I’m writing this series for [inaudible: 09:11]. The first book is out in e-book right now, called ‘Slow Surrender’, and the paperback comes out in August. The second book is going to be called ‘Slow Seduction’ and it’ll be out in January. The e-book and paperback are going to come out simultaneously. They’re publishing that out pretty quickly. ‘Slow Surrender’ had to be set in the real world; they don’t want space aliens, vampires and whatnot in this genre; that’s paranormal or whatever. I had to put it in the real world. I couldn’t just set it in the real world. After all the time writing science fiction and fantasy, so my main character in my mind, is based on David Bowie. The male hero is this tall, somewhat British . . . many of my fans are actually putting Benedict Cumberbatch into this role. If there’s ever a movie version, I would not say no to him for this role. In my mind, he’s a young David Bowie; he’s the David Bowie from ‘The Hunger’, which was a big vampire movie in my day.

JMW: I remember ‘The Hunger’.

Cecilia Tan: Yes, exactly. I needed somebody who I could keep up the hots for 3 whole books, as well. I said, “Let’s go straight to the top. Let’s go to Number 1.” He’s secretly a rockstar in the book. Our heroine does not know this at first. Probably everyone who reads the blurb on the back of the book will have guessed it by the time that first paragraph is over.

JMW: Unfortunately, the heroines never get the blurb on the back of the book.

JMW: Where does baseball fit in all this?

Cecilia Tan: Baseball is just yet another thing I do. As my partner, Corwin, puts it, ‘I have this uncanny ability to take anything that I am a fan of and turn it into my job’. In the same way that I started writing for the teen magazines when I was a teenager, I grew up loving the New York Yankees, grew up as a Yankees fan. My whole family are Yankees fans; it’s like a family religion, basically. We don’t have Christmas, we have Yankee Christmas. We get together during spring training, and I made little pinstripe stockings for it and everything. I’m not kidding. We’re like, “We’re not going to see each other in December, how about we have Yankee Christmas?” Then I started writing baseball articles at some point at the end of the ‘90s into the 2000’s, got published that way also. The next thing you know, this past winter, I edited The Baseball Prospectus. I edit The Baseball Research Journal for The Society for American Baseball Research. All of a sudden, overnight, over the course of 10 years, I’ve gone from just being a baseball fan to it’s another part of my job.

JMW: I think it’s a very cool part of your job. We put baseball metaphors in everything.

Cecilia Tan: Right. There are so many sex and baseball metaphors that I did in fact at one point eventually have to write a baseball romance novel. It’s still available. It’s called ‘The Hot Streak’ and it’s an e-book, from Ravenous Romance. It’s a heterosexual baseball love story in which . . . I think some people are like, “I think here’s too much baseball in it.” I’m like, “There’s no such thing as too much baseball.” It’s a romance for all my baseball-loving female fans.

JMW: That’s wonderful. We’re just about out of time. Is there anything you’d like to add?

Cecilia Tan: No, not really. Go out, read, have fun. That’s what life is all about.

JMW: Great. Thank you, Cecilia. Thank you for BuzzyMag.com. 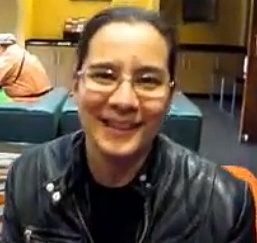