Award-winning, bestselling author of such novels as The Myth Hunters, Wildwood Road, The Boys Are Back in Town, The Ferryman, Strangewood, Of Saints and Shadows, and (with Tim Lebbon) Mind the Gap.

Christopher Golden: Thank you very much. Glad to be here.

JMW: You’ve written horror about everything from World War I vampires to robots linked to human minds to red balloons. Which do you find most frightening, the monsters of the legendary past, the terrors of the possible present or our possible futures?

Christopher Golden: It’s a tough question. I have to say that I enjoy the monsters of the past the most. I have the most fun with that, with mythology and folklore and the weird stuff. But as far as what I find the most frightening, it’s definitely the possible monsters of the future which we are sort of seeing born and raised every day. It’s funny, “Tin Men

,” which is the science fiction novel that you’re talking about, a lot of people don’t see that it’s also a horror novel and I have explained many times that “Tin Men” is just as much about fear as everything else I’ve written. It’s just about fear that is a little bit more immediate and intimate. 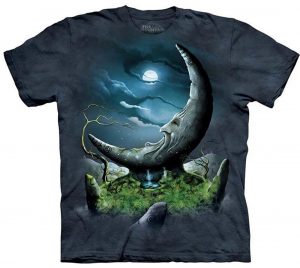 JMW: Were you always a fan of horror or was it something you grew into?

Christopher Golden: Born into it, I guess. In my blood. You know, when I was growing up, my mother would, well, when I started writing, my mom would say, “Why can’t you write something good?” She hates when I tell that story. What she meant was, “Why can’t you write something nice,” you know? And I would say, “Well, look, I’ve written western stories and romantic stories and science fiction stories, but something always goes horribly wrong. Someone always dies.” But when I was a kid, it was “Twilight Zone

” and “Kolchak: The Night Stalker

” and “Tomb of Dracula

” comics and then, you know, I discovered various short stories and then Stephen King, you know? And so that was always the stuff that I gravitated toward and my favorite was “Creature Double Feature” on Saturday and Sunday, just watching old monster movies with my brother. So all of that stuff is just the fabric of what I am now.

JMW: Mothers always ask, “Why can’t you write something nice?” I think it’s in the contract somewhere. 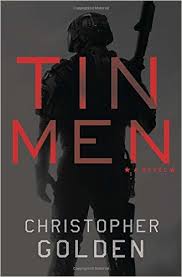 Christopher Golden: They do. They think it’s something they did.

Christopher Golden: “How did I raise this child to…”

JMW: Yeah. Oh, poor mothers. Do you think being a New England native had anything to do with this natural inclination?

Christopher Golden: I think so. I think that the more horror changes and evolves, the more we see it. The television series “Stranger Things

,” it was just on. It’s set in the Midwest. Well, when it opens, I was like, “Oh, this has gotta be New England.” And it has the feeling of New England stories, Maine, like a Stephen King story or something. I guess for me, it’s that when I was reading all of those books as a kid, they were all set in my neighborhood. They were all set in places I understood and could connect with and that made them both more fun and scarier at the same time. So I think…and also, look, every house in New England is a haunted house practically.

JMW: Every house is history and so many of them have histories.

JMW: In addition to novels, you also script comics with Mike Mignola, a web series with Amber Benson and video games. How does your writing process change when you shift between different media? 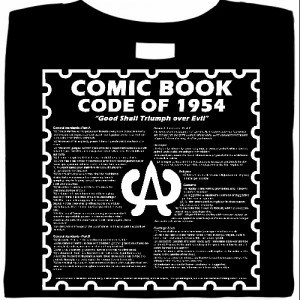 Christopher Golden: You know, every single one of ’em is a different discipline. I mean, that I think is what people assume, that if you can write one thing, you can write the other and it’s not true at all. You have to learn each one individually. And certainly fundamental storytelling structure is something you can carry from one medium to the next, but each has its own demands, each has its own different structure, different speed. The most difficult, and I think people may be surprised to know, that writing comics I think is the most difficult medium to get correct and to do well because it’s the most rigid. The story isn’t rigid, but how you deliver the visual information, you know, it only works if you do it a certain way. I think that’s true of every medium, but comics more than any other. Shifting back and forth, interestingly enough, is like going on vacation, you know? If you’re renting a house somewhere else, you feel a little bit uneasy at first but you settle in and so you’re just moving back and forth. I actually just finished a comic book script right before I came here yesterday, so… 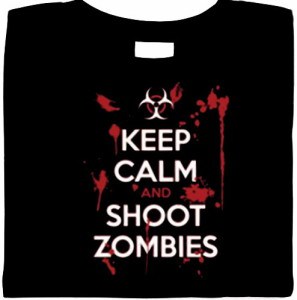 JMW: Oh, cool. Do you basically approach it differently in that one, you just sort of sit down and write where the other one, you have to use a spreadsheet? Or is it just getting the mindset differently?

Christopher Golden: I think it’s getting the mindset differently and just remembering certain things. I feel like with writing a novel, I have to have a certain emotional rhythm for myself. When I’m telling that story, I have to be in that place. I guess weirdly when I’m writing prose fiction on paper, it’s about putting myself into the story and writing comics or writing a screenplay is more about like painting the picture. What do I want the reader to see? Even if it’s a screenplay, what do we want them to see versus how do I want them to feel? So it may be a bit more distance in the other mediums than there is in prose, but…

JMW: And certainly in a script, though not necessarily in a comic script, you have actors that take the audience into that feel. 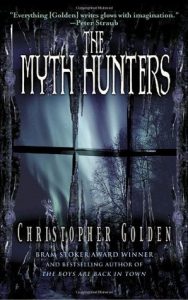 Christopher Golden: And in comics, the artist is the actor. The artist is the one who’s interpreting for the audience what you’re trying to get across and you’re just hoping that they’re going to feel what you feel about it and deliver it the way you would like them to deliver it, but you can’t rely on it. It’s a collaborative medium. Film is a collaborative medium. But you know, again we were talking about how writing’s a solitary occupation and I’m not a solitary person. I collaborate all the time because I enjoy it.

JMW: What was the biggest surprise that you discovered when you started collaborating with folks?

Christopher Golden: That’s a good question, as far as surprise. I feel like one surprise was how willing many of my collaborators were to surrender self. I think if you’re gonna have an effective collaboration, you have to be able to put aside your style and find a style that suits both that’s not yours or theirs, but somewhere in between. And I think also it’s been interesting for me to collaborate with certain people…Amber Benson being one of them, Charlene Harris recently being another…and how people assume that I’m doing all the work because, “Charlene’s too famous to write comic books with you,” or because, “Amber is a television actor or a film actor and surely she doesn’t know how to write a novel.” People have these assumptions that they make that are completely wrong, you know, and that’s upsetting, but it’s nice when you see them learn that they’re wrong.

JMW: Cool. It’s nice to know that somebody who has their name on something actually does help with the work. 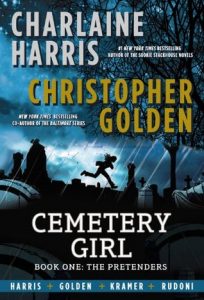 Christopher Golden: Yeah, absolutely. Absolutely. And fully. Charlene and I are doing this trilogy of graphic novels called “Cemetery Girl” and the first two

are out already. One of the reasons that Charlene wanted to do it is because she wanted to learn how to write comics. And when you want to learn how to write comics, you have to write the comics. So I’m happy now because it seems like, I mean, people get the fact that she’s writing, but initially we did have people who just thought I was taking her plot and writing it all myself. “No. No, that’s not what’s happening.”

JMW: And nobody’s dialogue is quite like Charlene’s anyway, so…

JMW: Back to your solo projects. Can you tell our viewers just a little bit about your upcoming hardback release, “Ararat“?

Christopher Golden: “Ararat” comes out in April of 2017 and I’m super-excited. We just, I can’t talk about it yet, but we just signed a deal to develop it for film and television, so we will see. But the setup basically is that there’s a landslide on Mount Ararat in Turkey and it reveals the existence of a cave that no one knew was there and when they climb to investigate this cave, they go inside and they discover that the walls are actually timber and it’s not a cave at all. It’s actually Noah’s Ark. But then when they go to the back of the cave, they find this thing that’s sort of like a sarcophagus and inside it, they find a skeleton with horns. And the question of whether that thing is a demon or not is the sort of centerpiece of the story, which the team that’s sort of filming and doing archaeological excavations inside the Ark end up in the middle of a December blizzard on the slopes of Mount Ararat at a time when they really want to get down off the mountain. 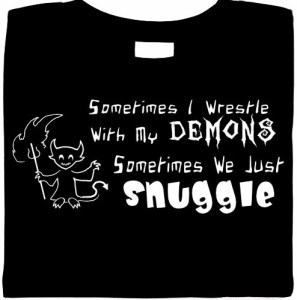 Christopher Golden: I won’t say anything more than that.

Christopher Golden: Yeah, even without demons.

JMW: And weren’t there two of everything on the Ark, as I recall my Bible showed?

Christopher Golden: There was, there was.

JMW: Anyway, what are you working on now, other than “Cemetery Girl”?

Christopher Golden: I actually…I guess I can talk about it even though I think we’re gonna stick with the name…I’ve written a lot of novels with my friend, Tim Levin. Tim is a phenomenal writer and one of my best friends and we just started a big epic fantasy novel for HarperCollins called “Blood of the Four.” And since we’ve just started it, I don’t wanna talk about anything else about it, but that’s what I’m working on now, along with more “Baltimore” comics with Mike Mignola, more “Joe Golem” comics with Mike and…

JMW: Both your fans will be delighted to hear that and intrigued about the epic fantasy. We’re just about at the end of the interview. Is there anything you’d like to add?

Christopher Golden: Only to say thank you for having me and I hope you’re enjoying Dragoncon.

JMW: I am. And thank you so much, Chris. Thank you for BuzzyMag.com. 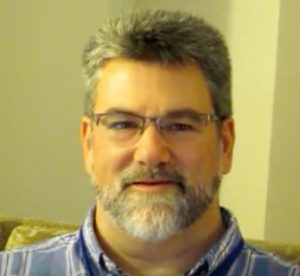