Darin Kennedy is a North Carolina Doctor by day, and novelist by night. In January he released his debut novel, The Mussorgsky Riddle.

Jean Marie Ward: Hello, this is Jean Marie Ward for BuzzyMag.com With me today is Darin Kennedy, the debut author of The Mussorgsky Riddle. Welcome, Darin.

Darin Kennedy: Hi! Thank you for having me.

JMW: We’re glad you’re here. I really like the whole concept of The Mussorgsky Riddle. It fuses classical music, psychic detectives, and Baba Yaga. Could you tell our readers a little bit about the book and the inspirations behind it?

is a story about a 13 year old boy who’s lost inside his own mind and a psychic that’s got to go in there and find him. It’s got a murder mystery. It’s got fantasy elements because whenever she’s inside the boy’s head, she’s facing gnomes, troubadours, Baba Yaga, the witch from Russian mythology.

As far as why I wrote it, this is basically my love story to Pictures at an Exhibition. It’s a great piece of classical music, if you’re not familiar with it, from the late 1800s. The reason the book is called Mussorgsky Riddle is because that’s the composer’s name.

JMW: And what about Pictures at an Exhibition really spoke to you? What made you think it would be a good basis for a novel, you know the various episodes of that piece of work? I mean don’t we have a situation where they’ve got chickens?

Darin Kennedy: Actually they do have The Ballet of the Unhatched Chicks. And my theory that that’s I believe the fifth movement of the paintings. My challenge to myself was, if I can write a book and legitimately use something called The Ballet of the Unhatched Chicks, then I’ve done a good thing. That’s one of the best scenes in the book because I made sure it was good.

Why did I do it that way? Pictures at an Exhibition is basically, in short, youwalking through an exhibition and seeing various paintings. The Gnome. The Old Castle. The Tuileries Garden. The Ballet. Baba Yaga’s Hut. If you listen to the music, Mussorgsky really captured what each of those things would sound like.

As far as how I came to write this book about it, I was literally on my 500th or so listen to it. Happened to flip the CD cover over. As I’m reading the names of the various movements, one clear thought to me was, these are chapter titles. Then all I had to do was come up with a story to go along with it.

JMW: This is not your first foray into classical music and it is not the only classical piece that’s referenced in the book. You have a great deal of love for music. You were in band in college and high school?

Darin Kennedy: I was in band pretty much as a trumpet through eighth grade, through my senior year of college. So I’ve played a lot of symphonic and other music of that type. One of my earliest tapes at the time was the Raiders of the Lost Ark soundtrack. I’ve been loving John Williams since Star Wars and Raiders and Jaws and Superman when I was a kid. That stuff always gets my juices flowing.

JMW: And you’ve not only brought in Mussorgsky but I believe there’s a little Rimsky-Korsakov and Scheherazade in this?

Darin Kennedy: I did. My dad is a big fan of Rimsky-Korsakov’s Scheherazade, which is another beautiful piece of music. I thought the setting of my book would be Pictures at an Exhibition and the character would be Scheherazade from Rimsky-Korsakov. It combines those two and those two composers were actually compatriots around the same time in Russia.

JMW: It works on a number of levels. It’s interesting to me that you, as a guy, picked a woman as your hero.

Darin Kennedy: As I was constructing it, I needed a place to go and I thought, who would be obsessed with this music? A little boy with something akin to autism. And them when I was trying to decide, who is the right person to walk his mind and experience all of that, it would not work as a man. The story very clearly wanted to be a woman’s perspective. Now the interesting thing is, the whole story is female, first person, present tense. So I definitely had to put on the other gender hat and go with that. That actually was a lot of the fun.

JMW: One of the good things about writing is you get to be different people, like an actor.

Darin Kennedy: She was very different than me.

Darin Kennedy: Well I’m not able to go to some of my critique groups quite as often because I am little busier writing and editing and promoting and things of that nature right now. Going to critique groups literally for the last six years, I have learned so much. I think you learn a lot when you are critiquing other people’s work and you learn a lot when they’re critiquing yours.

And I think even if you are not actively critiquing it, all the lessons you learn from all those experiences show up in your writing. This entire book was critiqued by my critique group and they’re all thanked in the acknowledgements page they are very good people in my life.

JMW: Speaking of real life and its interaction with your fiction, you’re a doctor in your day job.

JMW: Did that influence any part of the book or was the book your way of getting away from the day job?

It is a little bit of an escape however whenever you meet someone who’s military or you have a medical situation in my books, I think that they ring a little bit true because I’ve been in those places. I know what an ER looks like, smells like. In a lot of my different stories the hero does not come through unscathed. In all three of my books that have come out, somebody ends up in the hospital at some point because you can’t take the kind of punishment I deal out and you just walk on down the street.

JMW: You’ve got two other books?

Darin Kennedy: I do. I have one that my agent is shopping around right now. I code named it “Operation Ghost Story.” I can’t really tell you what it’s about and my first novel that we’re also still shopping around is a novel about chess and a recurring conflict where ordinary people suddenly become the white pawn or the black queen and go at it in full-out combat.

JMW: Do you think that idea of recurring conflict is in some ways a sublimated reflection of your time in the military?

Darin Kennedy: Well I will say I wrote the chess novel when I was in Iraq and there was a lot of that going on in my head. The return, return, return of combat is reflected in a lot of things. A lot of the movies we share are just examples of combat but just done through more of a fantastical element. A lot of people think Tolkien and all the middle earth and everything is just metaphors for war in the real world. So there is a lot of that to it. Yes.

JMW: We sublimate and yet we avoid. It’s the way humans deal. You mentioned you’re shopping two novels. What are you working on now?

Darin Kennedy: I believe that whenever I completed the Mussorgsky Riddle…it’s got a beginning, a middle, and an end and I tied up everything and it was done. I never dreamed I would write a sequel to it but then I believe it was on December 13th, I was sitting at work and all of a sudden the one little string that was left from the first story popped into my head. I was like, I could do that. And it just so happened that when I had that thought I was listening to a lot of Stravinsky.

JMW: Oh, my goodness. The Rites of Spring?

Darin Kennedy: That will probably figure in. Stravinsky actually trained under Rimsky-Korsakov and Stravinsky’s first three big things were all with the Ballet Russes in Paris. He’s a Russian expatriate in Paris writing ballets for the Paris. His first one is the Firebird. The second one is called Petrushka. The third one will be the Rite of Spring. Already in the part I’ve got written so far, the Firebird and Petrushka have played huge parts and I think the Rite of Spring, spoiler alert, may be where I’m headed by the end.

JMW: And the third book is going to be Rachmaninoff?

Darin Kennedy: I actually think it’s going to be Tchaikovsky. When I looked at ah what I need, like Beethoven is great but it’s always Beethoven’s Fifth and the music is beautiful but there’s not the story and the something to go with it. But Whenever you have 1001 Arabian Nights and Pictures at an Exhibition and crazy puppets and firebirds and suicidal dancers and then Tchaikovsky, I’m probably going to be going with Sleeping Beauty, the Nutcracker, and oh Swan Lake. Cause here I think here Swan Lake is this pretty thing but Swan Lake’s got some really scary stuff in it.

JMW: Well they did a horror movie about it. Black Swan.

Darin Kennedy: Right. Those elements will be what I do in the third one which at this time, if I go that way, will be called The Tchaikovsky Finale.

JMW: Cool. We’re just about at the end. Is there anything you’d like to add?

Darin Kennedy: Thank you very much for having me. We’re here at RavenCon and this was a fantastic time. I really enjoyed meeting you here…

Darin Kennedy: …and hanging out with all the other fine authors.

JMW: Thank you, Darin and thank you for BuzzyMag.com. 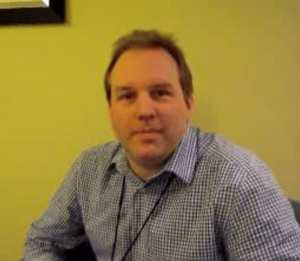