The Dark Defiles (A Land Fit for Heroes, Book 3) 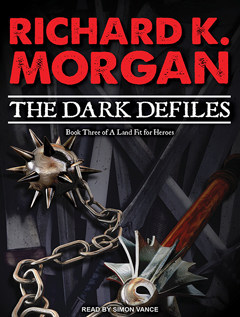 When we come to the end of anything, when we know that this is our last one, expectations go up and the pressure is on. With a book series the author has to tie up all loose ends and find a fitting goodbye to all of the characters they have given us over the years. While some authors handle this magnificently, others decide to try and cram a whole other book into the one they are writing.

Ringil Eskiath, our unstoppable warrior turned black mage, is at the end of the world looking for a mythical sword. The sword holds the soul of a dark king that the demons, the Aldrain, want to use to recapture the world as their own. Ringil finds that it was a ruse to separate him from his friends, Egar the Dragonbane and Archeth the immortal half Kiriath. Ringil has to find and face the Aldrain at their source along with their human co-conspirators to rescue his friends. Along the way he has to fight to retain control of his growing dark powers as well as confront his family that rejected him because of his homosexuality. Meanwhile Egar and Archeth set out to find the truth behind the war that ended 5,000 years earlier and the massive weapons used to end it. If the Aldrain get their hands on the weapons, humanity doesn’t have a chance. The three of them look for answers, redemption, and the true measure of heroes.

SHOP – I’m Too Sexy For My Armor Shirt

Morgan came thundering on the sci-fi/fantasy scene with his  novels (Del Rey, 2003-2007). He had an amazing blend of Noir fiction and sci-fi. While his sci-fi work pulled me in quickly, his fantasy writing hasn’t won me over quite as strongly. Morgan brings his brutal grittiness to his fantasy in the same way he did for his sci-fi; it just feels, to me at least, that he is working within familiar, and a bit stale, ideas instead of striking out on his own like his first batch of novels. Also I feel like he was cramming a tremendous amount of back-story into this book. The book was near 700 pages but it felt like 300 or so was about myths, gods, and history of the world The Dark Defiles takes place in. While all of the back-story was interesting, it just slowed the narrative and made the book seem much longer.

With that being said, is best of the series. Morgan built a fascinating world, dirt and all, and populated it will heroes that were also real people. Morgan dissects the idea of hero and looks at it from every angle. Our three protagonists aren’t anti-heroes they are just flawed. While they deal with their flaws they realize that in the end heroes don’t get to live happily ever after. And though heroic deeds can change the world, their actions can be diluted and washed away by the waves of time.

A good fantasy read but start at the beginning,  The Steel Remains (Del Rey, 2010). Morgan doesn’t recap what happened up to this point and new readers will be lost.

Genre-defying fantasy. Ringil Eskiath, hero to many but friend to few, who is an aging warrior thrust back into the violent life that he thought he'd left behind. Despite being a war hero, Ringil is also viewed as a corrupt degenerate by polite society...but unfortunately, that society needs him for its own survival.