The story follows Asajj Ventress and fan-favorite Quinlan Vos as they work together to achieve a necessary, yet deplorable goal: the assassination of Count Dooku. 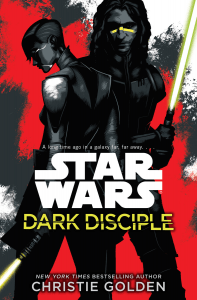 The Clone Wars. I do go on about them. Or rather it, since I’m talking about the animated TV series. If you’ve been following my reviews of the new canon installments you know that and know I basically think it’s the bee’s knees. Or the Death Star’s confetti cannons, or Palpatine’s Mercy and Compassion, or something equally as whimsical and ultimately nonexistent.

Imagine my excitement when I learned the next offering in the new Star Wars canon would be Christie Golden’s Dark Disciple, a novel that would encompass one of the last major story arcs intended for The Clone Wars‘ truncated Season 6. An epic storyline of love and hate, Sith and Jedi, bounty hunters and sworn brothers, Nightsisters and renegade hearts. There may have been starry eyes when I received my advance copy.

Who am I kidding? This novel stars Asajj Ventress, giving her even more depth than the admirable fathoms the TV series plumbed in her. There were DEFINITELY starry eyes

The story follows Asajj Ventress and fan-favorite Quinlan Vos as they work together to achieve a necessary, yet deplorable goal: the assassination of Count Dooku. The Jedi Council sends Vos on this path, valuing his ability to adapt to deep cover and thus court Ventress’ assistance without her knowing he’s a Jedi. Of course, anyone who spent more than a few minutes considering this plan would realize that even the most serene Jedi might have a little trouble hiding their Force affinity in front of a Nightsister of Dathomir and former Sith acolyte. (Someone as swashbuckling as Quinlan Vos, ever skating along the edges of strict Jedi practice, had no chance.) Also, there’s the little problem that you probably need at least two Force-users working together to take on a Sith Lord of Count Dooku’s caliber.

(Yeah, yeah, Anakin was but one man. THE CHOSEN ONE, MAN.)

Their quest spans a dizzying number of betrayals, broken oaths, breathtaking action scenes, heartbreaking romance, and a fascinating, yet disturbing dive deep into the dark side of the Force. I yearn to have seen this one on the small screen, but also value just how deep we were allowed to go thanks to the written word. (Not the point, but there’s some sexiness with the murder here, y’all! Whoo!) Christie Golden is adept at her craft: tie-in writing is as much an art as any other genre, and Golden demonstrates her strength and experience over the other writers tapped for these new canon novels. This book is engrossing, well-paced, and a damn good read. It may read quickly, but that doesn’t mean it doesn’t leave you breathless and satisfied.

I also found it incredibly satisfying that Dark Disciple??shows the Jedi Order had become bloated, hypocritical, and badly-managed by the era of the Clone Wars. It sometimes feels like this concept gets glossed over in the depiction of a heroic order slaughtered and forced underground by the evil proto-Empire. I applaud any attempt to show that the Jedi were as much responsible for their own downfall as any Sith menace. 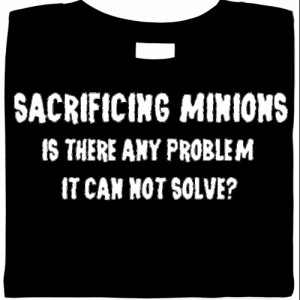 shop – Sacrificing Minions Is There Any Problem It Can Not Solve?

Equally as fascinating is the exploration in this story of the dark side of the Force, and the understanding that these two “sides” are not as clearly demarcated as some would like to believe. There are shades of grey, and other ways of using the Force than the two extremes touted by the two opposing orders of Jedi and Sith. As a Nightsister of Dathomir, Asajj Ventress understands this.

You could understand this too: get thee to a bookstore. Digital or physical, it makes no difference. Lunge at the nearest copy of Dark Disciple, because the only ones rewarded here are those who go after what they want. You want this, don’t you? It’s worth your time. And isn’t the cover such a seductive enticement?

(The answer is yes. Don’t even pretend otherwise.)

The story follows one-time Sith acolyte Asajj Ventress and fan-favorite Jedi Knight Quinlan Vos as they work together to achieve a necessary, yet deplorable goal: the assassination of Count Dooku.