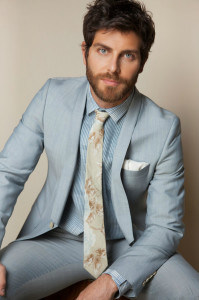 In GRIMM, now in its third season on NBC, David Giuntoli plays Nick Burkhardt, a Portland, Oregon police detective who learns that he’s a Grimm – someone who can see and, if need be, go up against Wesen, human-looking beings who have a supernatural side to them.

At the end of Season 2, Nick finally told his girlfriend Juliette (Bitsie Tulloch) about his secret identity as a Grimm. Nick’s police partner Hank (Russell Hornsby) learned earlier in Season 2, and Nick’s friend Monroe (Silas Weir Mitchell) has known all along, since Monroe is a werewolf-like Wesen called a Blutbad. It turns out that Nick’s boss, police Captain Renard (Sasha Roiz), also knows, because Renard is half-supernatural Royal and half-Hexenbiest, and may not be entirely trustworthy.

Leading man David Giuntoli was born in Wisconsin and raised in St. Louis, Missouri. He first crossed paths with GRIMM executive producers Sean Hayes and Todd Milliner when he did a guest stint on their half-hour comedy series HOT IN CLEVELAND. His other credits include a series regular gig on PRIVILEGED and a role in the recent feature films 6 MONTH RULE and CAROLINE AND JACKIE.

Part of the following interview is conducted one on one with Giuntoli at a party thrown by NBC for the Television Critics Association, and part of it from a press roundtable, also hosted by NBC, held at Universal Studios in California, with Giuntoli and GRIMM executive producers David Greenwalt and Jim Kouf, who share series creator credit with Stephen Carpenter.

For starters, what is the correct pronunciation of Giuntoli? “Gin-toe-lee,” the actor relates.

How does Giuntoli feel about the changes in Nick over the seasons? Nick started out as a secretive loner, and now most of the people in his life not only know all about him being a Grimm, but tend to help him out when his police work and Grimm vocation overlap.

“I think the more, the merrier for Nick Burkhardt,” Giuntoli says. “I feel like Nick didn’t have any family, really. He needed a surrogate family that he’s been building with Juliette and Monroe and Hank and maybe now the captain.”

Mitchell, also at the party, stops by and advises, “Don’t listen to him. He’s lying. He’s a liar.”

Giuntoli laughs. “Even when I’m lying – see that’s the thing. It’s very hard to tell. I’m trying to build this surrogate family, so I think Nick’s very happy that more and more people know. The process of becoming a Grimm is much like the process of grief. It’s like, you deny it, and then you kind of bargain for it, but then you own it, you accept it. I feel like Season 3 is acceptance. And of course, there are some more changes. I go ashen from time to time. So there will be more of that to deal with.”

What are Giuntoli’s favorite scenes so far?

“I think I really enjoy the scene where my character told Bitsy’s character – I think it was in the [first] season finale – everything that went on,” Giuntoli relates. “That was kind of fun. And I like having four pages [of dialogue] to do. It’s fun to work in that.”

On the other hand, Giuntoli says he’s also enjoyed sequences where he’s had nothing at all to say, such as the bar fight in the Season 3 premiere episode, where Nick has been rendered zombie-like by a supernatural toxin spat on him by Baron Samedi. The actor says jokingly of the producers, “They’ve found the winning formula – it’s to give me no dialogue.”

Another favorite episode, he says, is this season’s “A Dish Best Served Cold,” where the piglike Bauerschwein attempt to eradicate the wolflike Blutbaden. “that’s one of my favorite plot threads, as far as the interspecies rivalries go, the Blutbaden versus the Bauerschwein. It’s fun to see that these Blutbaden, who are the big bad wolves, they’re the ones who have taken the move into the more new age understanding of Wesen/Grimm relationships, and the little victim pigs are like the old-school, ‘Nah …’ They see things black and white, where the Blutbaden are more progressive. I like how that’s kind of flipped.”

Another aspect of “Dish” that appeals to Giuntoli, he acknowledges with a laugh, was the pretend-but-real-looking skirmish between Nick and Monroe. “That was fun, getting to beat up on Silas Weir Mitchell a little bit. I thought it was an ingenious stroke of writing.”

Although GRIMM employs a team of expert stunt people, the actors are called upon to do a fair amount of action. Has Giuntoli ever been injured in the GRIMM line of duty? “All the time. We have great stunt people – a guy named Matt Taylor coordinates the stunts, he’s won Emmys, he’s wonderful – so they minimize the injuries as much as possible, but bruises, intense soreness, you name it. I’m very lucky in that I have a stunt double who looks so much like me [laughs]. I’ll tell you what – the poor guy has to get a haircut every time I do. He’s a grown man. ‘No, snip, snip.’ And we dress the same, obviously, on set, and I’ve had friends visit set and they approach him, and they’re like, ‘Hey – sorry!’ And people from Portland have come up to him on set and said, ‘Hey, man, we really appreciate your work on the show …’ So it is kind of bizarre. We put his kids through private school.”

In the bar fight, Giuntoli says there were moments that were filmed that he guessed would be removed by Broadcast Standards and Practices, including a stunt that had the zombified Nick slamming a woman headfirst through a jukebox. “As I was doing that stunt, I’m like, ‘Dude, they’re cutting this’.”

Much has been made of a love scene that required a stunt coordinator. “What love scene shouldn’t?” Giuntoli quips. The sequence in question involved Tulloch and Roiz, but as a rule, intimate sequences require choreography so that that actors know where – and where not – to put faces, hands and so on. What happens when that is combined with fight choreography? Giuntoli laughs. “It makes for a very chilling scene. That’s all I’ll say.”

He jokes that because Tulloch has some issues with the heels on Juliette’s shoes, this can make her a dangerous partner in physical scenes. “One of the funny things on set is, she can’t stand up without the help of, like, three different people. So when she’s throwing a punch, we’re so scared that she’s going to [miss] – oh, my God, we’re all terrified.”

As far as childhood boogeymen go, Giuntoli says, “That would have been the banshee from DARBY O’GILL AND THE LITTLE PEOPLE.” However the episode dealing with exorcism, “Stories We Tell Our Young,” hit close to home. “My boogeyman would have been Satan, because I grew up very Catholic. I was scared of EXORCIST and all that stuff. The vessel in which terror came to me was through some of the stories in the Bible and Catholic-themed things like the Devil and ‘He’ll get in you.’” Fortunately for Giuntoli, in the episode, the culprit turned out to be organic rather than Satanic.

With Nick’s mother (Mary Elizabeth Mastrantonio) also being a Grimm, Renard’s involvement with both the Royals and the Resistance movement and Adalind’s (Claire Coffee) supernatural baby on the way, GRIMM has an ever-growing set of story arcs, but it also continues to have standalone plots. Does Giuntoli like one sort of narrative more than the other? “I enjoy both the episodic and the serialized – I don’t really have a preference, as long as it’s good, emotionally-rooted stuff for me to do, I’m pleased. They take crazy twists and turns in our show, so I can expect that.”

Does Giuntoli have a favorite aspect of playing Nick – determined, haunted, romantic, in fight mode? “I like when he gets caught in those moments where – everything’s new to him all the time, or so much is new to him all the time, the further he goes down the Grimm hole – what?” He laughs, realizing how that sounds. “Google that phrase. Google Image that at home tonight. And I love when he’s processing, ‘Okay, how do I handle this for the first time?’ And he’s kind of caught. He’s supposed to be this intimidating force, but you see behind his eyes, he does not know what he’s going to do, he doesn’t want to decapitate this guy. He doesn’t know how to handle it. So I like those moments of discovery and doubt.”

Unlike many TV series that take place in one city and shoot in another, GRIMM is actually shot in Portland, Oregon. Since a lot of the stories take place outdoors at night, it can be a challenge to get everything done on time before the sun comes up, Giuntoli explains. “In Portland, the more north you go, the longer the summer is, during the summer months, so night started at eight, nine-thirty.”

Then again, Portland can be fun for its random surprises. “I tell this story, and it’s so very Portland, and it’s so very genre fan-y. I was having drinks with Silas inside of a room – there was a window, and we were kind of facing the street and commuters were getting off of work, and we just saw a guy with a briefcase walk by the window for a brief flash and he was wearing a full wolf head.”

Did this have anything to do with GRIMM? “Well, that’s what’s beautiful about being in Portland – who knows?”

Giuntoli says he’d like to branch out into directing. “Absolutely. The longer you’re on a set, if you have any curiosity at all, you certainly would like to get on the other side of the camera.”

So might he direct an episode of GRIMM? “Maybe one day down the road. We haven’t really gotten into that yet.”

Like his GRIMM mates, Giuntoli has now done panels at Comic-Con. What has that been like? “It’s fun to be a rock star at Comic-Con. And the fans are really into Comic-Con. They’re wonderful.”

In conclusion, what would Giuntoli most like to tell people about GRIMM right now?

“I think they should watch, because I don’t even know what’s going to happen. It’s a big mystery.”