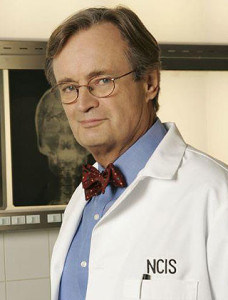 Actor David McCallum has been a television legend for five decades, ever since he took on the role of Ilya Kuryakin, opposite Robert Vaughn’s Napoleon Solo, in four seasons plus a telefilm reunion of THE MAN FROM U.N.C.L.E., beginning in 1964. However, McCallum has almost tripled that tenure in his role as U.S. Navy pathologist Dr. Donald “Ducky” Mallard on NCIS: NAVAL CRIMINAL INVESTIGATION SERVICES., which is now in its eleventh season on CBS, Tuesday nights at 8 PM.

CBS is throwing a party for the Television Critics Association, and McCallum has been visiting with some of his NCIS cast mates who are here – Pauley Perrette, Rocky Carroll, Brian Dietzen – but right now he’s by himself and says he’s happy to talk about his work.

For one thing, McCallum marvels at the show’s longevity. “Eleven seasons. I have tenure. I’m like a college professor, except I’m a perpetual pathologist.”

McCallum was born in Glasgow, Scotland, to parents who were both professional musicians – his father, David McCallum Sr., was a violinist and his mother Dorothy was a cellist – so a career in the arts seemed a natural choice. McCallum studied acting at the Royal Academy of Dramatic Arts. According to the Internet Movie Database, his first television work was in AS THE WORLD TURNS in 1953. He’s done feature films, including THE GREAT ESCAPE and playing Judas in the 1965 THE GREATEST STORY EVER TOLD. McCallum has also done other notable television series, including COLDITZ and the science-fiction/fantasy SAPPHIRE AND STEEL opposite Joanna Lumley. Even so, Ducky and Kuryakin remain McCallum’s best-known characters.

Asked if he ever imagined doing any role for eleven years when he began his acting career, McCallum responds, “You don’t even think about it, it just happens. It’s something amazing to happen to someone at my age. At [almost] seventy years of age, somebody says, ‘Would you like to do this?’ And I’m now about to have my eightieth birthday in a couple of months, and I’m still doing the same job. What could be more wonderful?”

Well, it might be less wonderful if McCallum wasn’t happy in his work, but he says, “I like the job, and what I like about it is, if there was anything about it that I didn’t like, we would sit down and talk about what we could do to improve Ducky or take him down another angle, and I wouldn’t suggest anything, because the writers have such wonderful minds, they come up with great stories for everybody and they would take care of it.”

Playing Ducky has provided quite an education for McCallum, the actor notes. “I constantly have to learn – I have a book. Every single show, I have gone on the Internet to find out the details of what it is that I’m doing on that show, and I have them all in binders, and so I can go and look up aortic stenosis if I have to, because I’ve done it and I know what it is, and yes, I’ve learned a colossal amount.”

Research, McCallum relates, is actually one of his favorite aspects of doing NCIS. “I get accused by my family – they call me Dr. Death now. I have yards and yards of books on the subject of death. When we started this show, I didn’t know anything about pathology and I didn’t know anything about [the real] N.C.I.S. I learned the commitments of excellence that all of those special agents have, and then we brought that to what we all do as a team. I love this show because it gives me a chance to do what I was born to do in the best possible way. At the same time, I have had Craig Harvey, the coroner in Los Angeles, Craig Mallak, the chief pathologist of the [U.S.] Army, and a whole host of people in the world of pathology that have helped me to understand what they do, how they do it. And I think they respect the fact that we do it as well as we do. But the learning process never stops. Gary will come up within the next few weeks with something that I’ve seen in some body, some part, some body part that needs twisting and turning. And I will learn again about this pathology. And that’s been the most exciting part of the whole show for me.”

Over the course of all the seasons, can McCallum single out a favorite episode or scene so far? According to McCallum, there are now too many choices to answer that question. “There are so many, many, many that no, I can’t. Not any more. I used to say I loved “My Left Foot,” but that was like in the second season, way back. And there were things that happened – there was one scene with Brian Dietzen [who plays Ducky’s young associate Brian Palmer], when we have three or four bodies scattered all over the room, we think we have three and then we discover we have four and then five, and it’s a very funny exchange. I mean, there are just moments that you remember that are very special.”

Does McCallum ever look back on his work in THE MAN FROM UNCLE? “Yes, I did, actually – I pulled one out and took a look at it the other day, and it turned out to be the one that my ex-wife, Jill Ireland, was the guest lady on it that week, and the whole thing was somewhat ironic and amusing, but it was very interesting to see her after all these years.”

McCallum expresses surprise when asked about his reaction to the impending departure of NCIS cast member Cote de Pablo, who plays agent Ziva David. “I don’t know why she’s done it and the only person I suppose you have to ask to find out why is Cote.”

McCallum is glad to announce that someone special is about to come into his real-life family. “One of my sons, his wife is expecting a baby, so that will be the eighth grandchild – that will make eight grandchildren and that’s the only project that I’m working on outside of NCIS.”

As to NCIS, McCallum says, “I just love the family. I couldn’t be luckier.”

McCallum’s sentiments seem unchanged from 2012, when at a question-and-answer panel for the Television Critics Association last year, he expanded on his lasting love for his NCIS experience overall. “I got a note on the two-hundredth [episode], a very gracious note from [CBS CEO and president] Les Moonves and … the rest of the gang, as we call them, and it said, ‘Congratulations on reaching this milestone in television history.’ And I put it down and then a few hours later, I said, ‘Now, wait a minute, that is a tremendous achievement, to be part of something like this … You’ve done other things, but this one has a wonderful life of its own. It really is an animal with a heartbeat. It has something that surrounds us, and you get nervous when you walk in to do the work. You try to do it the best you can. And you notice that everybody around you is in this same world. And it is a colossal pleasure. I don’t worry about numbers [ratings]. That’s something I don’t understand. But the fact that we are doing what we’re doing and making a lot of people happy and entertaining them is just fabulous.”