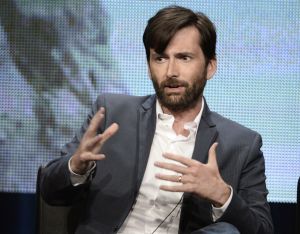 Last year, an eight-part series called BROADCHURCH, created by Chris Chibnall, aired first on the BBC, then on BBC America. BROADCHURCH is the name of a small British coastal town where a young boy is found murdered. David Tennant starred as Detective Inspector Alec Hardy, brought in from out of town to supervise the investigation, with local police Detective Sergeant Ellie Miller (Olivia Colman) assisting him. Making things more difficult are the facts that Hardy’s arrival quashed Miller’s promotion, and that Miller’s son was best friends with the victim.

Now Fox is bringing forth GRACEPOINT, a ten-part American adaptation of BROADCHURCH, executive-produced by Chibnall with Carolyn Bernstein and show runners Dan Futterman and Anya Epstein. GRACEPOINT is the name of a small Northern California coastal town where a young boy is found murdered – and David Tennant stars as out-of-town police detective Emmett Carver. Anna Gunn, of BREAKING BAD, plays Carver’s local colleague. For those who have watched BROADCHURCH, the producers say that GRACEPOINT will have a different ending, but there are certainly similarities.

And even that’s not the full extent of Tennant’s involvement with the story and the character. He’s also signed on for Season 2 of BROADCHURCH, although, as he explains – speaking in his real-life Scots accent rather than the various ones he employs in his diverse roles – on the GRACEPOINT Q&A panel that Fox holds for the Television Critics Association, it’s not as though he was contractually compelled to do either the U.S. version or the second season.

“BROADCHURCH was conceived as a one-off show,” Tennant reports. “It was never going to have [a second season]. Chris Chibnall, he changes history. But none of us were contracted for anything beyond the eight episodes of BROADCHURCH. It was a one-off deal. The fact that it’s now gone on to a second season was new, and GRACEPOINT was never in the cards. I mean, GRACEPOINT wouldn’t have happened if BROADCHURCH didn’t work, so the idea that there was some master plan that I signed up for a length for, no. It’s a nice idea, but no. It’s all just opportunities that I would have been foolhardy to turn down.”

So what has drawn Tennant to play two different versions of the same character? “Well, the thing is, what I can’t get enough of is good writing, you see. And when it’s this good, you think, ‘Well, if they want me to be part of it, I’m not going to say no.’ It’s always a gamble on any new project, but if you can start with a good script, then you’re on to, ‘Why not?’ You can mess up a good script, but you can’t make a bad script much better. So I’m just happy to go where the good writing is, which has been BROADCHURCH and now GRACEPOINT and now BROADCHURCH again. If the writing keeps being as good as it’s been so far, then I’ll keep turning up, if,” and here he references the potential differences between the two shows, “I even make it to the end of GRACEPOINT Season 1. Who knows?”

[easyazon_block add_to_cart=”default” align=”left” asin=”B00NP689EA” cloaking=”default” layout=”top” localization=”default” locale=”US” nofollow=”default” new_window=”default” tag=”buzmag-20″]As someone who has worked in both the U.K. and the U.S., Tennant is in a good position to offer an opinion on American remakes of British series. When asked, he replies, “I think every individual case has its own merits and demerits, doesn’t it? And it works both ways, I guess, and that’s down to the talents of the production crew on each. I’m too close to this to really be able to be objective about it, other than I’m thrilled to be part of this cast telling this story, as I was in Britain. It’s probably for others to dissect. I don’t know. Something like THE OFFICE is a good example, isn’t it, which was brilliant, which was such a fantastic show to start with. It was brilliantly re-imagined over here and started very similar [to the U.K. original] and ultimately became a very different show, which was equally successful in a very different direction. I don’t know if that really answers [the] question, but I think there’s always been a lot of ‘We’re two nations divided by a common language,’ I would say. There’s a lot of traffic back and forth culturally, and I think there are huge advantages to that. Sometimes it backfires, but I think we can bring contrasting sensibilities to the same piece of work and get something exciting and new from it. I’m confident that’s what happened here.”

What are the differences for Tennant between the characters of Alec Hardy and Emmett Carver?

“They feel very different to me,” Tennant responds, and then jokes, “Obviously, they both look quite like me. And they’re similar heights.” More seriously, he says, “It’s hard to produce a list of differences. Obviously, their sort of essential circumstances are similar, but they feel very different to me. It’s a lot easier for other people to be objective about that, I guess. It becomes very personal and very difficult to unpack, because I got very close to both of them, I guess.

“They feel very different because of the circumstances of everyone around me. You’re playing opposite this extraordinary kind of Rolls-Royce of a cast. I’m also very fortunate to play with a Rolls-Royce of a cast back home, but it’s a very different one on that and creates a different set of circumstances to be within. It’s such an unusual situation. It’s the same character, and yet it’s not. The relationship between Carver and Ellie Miller is very different to the relationship between Hardy and Ellie Miller, because they are very different actresses playing those parts, even though they have similar starting points. And I think that’s true right through working with all these extraordinary people as well. And the spine of the story is the same, and the spine of the two characters is the same, but there’s very different flesh on the bones, I think.”

The creative team decided that for the best results, the first time that Carver meets the mother of the murdered boy would be the first time Tennant met actress Virginia Kull, who plays the grieving parent. Kull says that Tennant was even housed in a separate hotel to avoid an accidental early encounter.

Tennant says he believes this was useful to the emotion of the scene. “The first time we [Tennant, Kull and Michael Pena, who plays the boy’s father] looked each other in the eye was live on camera when I go into their house to tell them [their son is dead]. We didn’t rehearse it.”

Tennant quips, “That’s how I like to work anyway. I ask that nobody looks me in the eye, and [everyone] address me as ‘Admiral.’ No, I think after that initial moment, you get to know everyone, inevitably.”

The determination to keep the actors apart until the right moment lead to some real-life near-slapstick, Tennant adds. “There were a couple of moments when I went to meet someone somewhere, and there was a whole kind of Keystone [Cops] culture. ‘Don’t go there! Come around this corner! You might look Virginia in the eye!’”

The effort seemed worth it, Tennant opines. “What it does is, it allows – often, when you’re investing in that kind of emotional territory that’s quite raw and dark, the first take is the one that’s real, and after that, the danger is you’re chasing a reproduction, so to be able to get some of those moments actually happening for the first time, not even rehearsed, to be happening kind of live and raw and for that to be what makes the final cut, I think that’s exciting.”

At a party Fox throws for the Television Critics Association later that evening at West Hollywood’s Soho House, Tennant is available for a bit of private conversation.

One definite difference between the American Carver and the British Hardy is that Carver, like nearly all American law enforcement officers in the field, will carry a gun. Does that change anything for Tennant?

“It changes the way you operate procedurally, which is interesting,” Tennant replies. “It changes how you treat certain situations, so I think it changes some of the dramatic motors of scenes, because you have to get to the point where that’s [the gun] something you would have every day, so you have to think beyond the novelty of it and think yourself into the past of that being how you do your job.”

Without getting too spoilery, can Tennant say anything about how Hardy, who seems to be off the force at the end of the original BROADCHURCH, gets back into detective work in BROADCHURCH PART 2?

In fact, Tennant cannot. “If I mention a word of the plot of BROADCHURCH PART 2, I will be shot. The levels of secrecy they’re getting into aren’t like any I’ve ever known.”

That’s quite a statement coming from someone who spent three seasons playing the Doctor on DOCTOR WHO.

“I know!” Tennant agrees. “It’s a step up from that. But we get sent script pages and emails and we then have to input passwords to get text messages on a different number. It’s crazy.”

Speaking of DOCTOR WHO, has Tennant checked out the work being done by fellow Scotsman Peter Capaldi, who is currently playing the Twelfth Doctor? At the time of this discussion, Tennant hadn’t yet caught up with the current season, though he says he’s eager to do so. “I’m so excited to see him. We’ve been keeping in touch a lot, and he’s been having such a great time that his enthusiasm is infectious for it.”

Is there anything else Tennant would like to say about GRACEPOINT right now? “I don’t think so. I think it needs to speak for itself. I think it’s one of those stories that will draw people in, and I’m very excited for the people who don’t know BROADCHURCH and have no experience of what it is just to receive the story for the first time, and that’s what’s going to be exciting about it.”