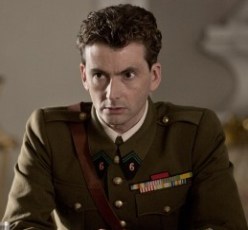 Since ending his tenure as DOCTOR WHO – albeit he’ll be reprising the role in the series’ upcoming fiftieth anniversary – Scotland-born actor David Tennant has kept very busy. He’s won acclaim for Shakespeare on stage in the title role in HAMLET and in MUCH ADO ABOUT NOTHING opposite erstwhile WHO colleague Catherine Tate. He’s played a wary Las Vegas magician/vampire hunter in the remake of FRIGHT NIGHT. Starting Wednesday, April 3, Tennant stars as Jean-Francois Mercier in the miniseries SPIES OF WARSAW on BBC America (the production previously aired in the U.K.), which was adapted for television by the famed writing team of Dick Clement and Ian La Frenais from the novel by Alan Furst. SPIES is set in Poland, Paris and London in the years 1937-1939, as World War II first looms, then rages.

BBC America is throwing a party at La Boheme restaurant in West Hollywood, which has been dressed up to look like a Civil War-era New York City brothel in honor of another BBC America series, COPPER. Tennant is in attendance, enjoying the live music, and making himself available to discuss his current project.

In SPIES OF WARSAW, Tennant is in fact a Scottish actor using an English accent to play a Frenchman posing as a German. Given that much of SPIES is set in Warsaw, does Mercier ever pretend to be Polish? “No,” Tennant says. “He pretends to be German, and I had to learn some German, which was – wow. I hope it was all right. He doesn’t pretend to be Polish, because he’s very much a Frenchman, a Francophone. A lot of French was spoken, so Polish becomes our sort of base language for the piece. So when our characters are speaking in English, they’re speaking French, if you see what I mean. So there is some German, some Russian, but basically everyone is speaking French, which is English.”

Which, Tennant acknowledges, sounds a little confusing. He speaks German when Mercier is speaking German, though he allows he wasn’t always sure what he was saying. “I learned it by rote, so whether I’m managing to successfully convey the meaning in German, it will be for others to judge, not me.”

Besides German, is there anything else Tennant had to learn in order to play Mercier? “I learned how to fire the guns that we used – that’s always tricky. It’s not that it’s exceptionally difficult, but quite rightly and properly, a lot of health and safety surrounds those moments. So people come and stand around you and there’s a lot of, ‘Do not touch the gun, until …’ ‘Let me show you the edge of the barrel!’ In fact, it gets quite alarming, not because it is alarming, but because people have to be very protective and very clear, and that’s right and that’s proper, but it doesn’t feel like they’re very calm about these things – they’re really very exercised about it. [There was also] a bit of horse riding – I’m not a natural horseman, so there’s that. They were beautiful horses, and they were so easy to control, but by the end, you get a bit cocky – that’s the trouble,” he laughs. “By the end, I was thinking, ‘I can do this, I can do this,’ and of course, I get experts around to help.”

Tennant adds that he also researched the era of SPIES. “I read a lot, I watched a lot and it’s a fascinating time period, I think, the late Thirties, as Europe was literally sort of coming to the boil. I did a movie a couple of years ago called GLORIOUS ’39 with Romola Garai, which is about that time and that moment in time. I think it’s a fascinating moment, because the history of Europe and the world pivoted in that time. I’m continually fascinated by that time, just because things could have been so different and the world we live in now been so different had Hitler been appeased, had France managed to form a sort of stable government. I’m fascinated by those moments in history that sort of change things forever and I find myself looking for the modern equivalents. Is Lehman Brothers [in the Wall Street collapse] one of those moments that changed the future of everything? I don’t know.”

Does Mercier’s French nationality have any effect on the way Tennant plays him him? “I think it probably does,” Tennant says. “I think there’s a Gallic attitude, perhaps, that hopefully one has tried to nail. There’s also an insouciance to the French, I think, which is to be admired, and hopefully Mercier has got a bit of that.”

SPIES screenwriters/producers Clement and La Frenais have had great stature in England for decades. Given their longevity in the business, has Tennant ever worked with them before? “I never had,” Tennant replies. “They’re legends. I was weaned on their stuff – PORRIDGE and THE LIKELY LADS and AUF WIEDERSIEHN, PET. They’re legendary figures. So when you get a script with their names on the front, it’s quite humbling to think that you might be working with guys who you know their stuff so well. And to get to know them – they’re over there,” he indicates where Clement and La Frenais are sitting at an outdoor table, “they’re such lovely guys, and still so motivated and so enthusiastic. They’re in their elder years, but you wouldn’t know it. They still have the chutzpah that I can only aspire to.”

Devout DOCTOR WHO fans probably already know about this already, but for less plugged-in admirers of Tennant’s tenure on the series, there are two hilarious music videos available on YouTube. One has the entire DOCTOR WHO cast and crew singing and dancing along to the Proclaimers’ “Five Hundred Miles.” The other, “The Ballad of Russell and Julie,” has Tennant and WHO costar Catherine Tate (Donna Noble) portraying WHO executive producers Russell T. Davies and Julie Gardner, singing their concerns about making the show as John Barrowman (Captain Jack Harkness of TORCHWOOD) emcees. The question is, who made the videos?

“It was our second assistant director, Jennie Fava,” Tennant reveals, “who was the mastermind behind those things that are now escaped onto YouTube. Yeah, they’re great. They were just done for our own amusement. Nobody got paid, it was just something that we did. ‘The Ballad of Russell and Julie’ was done as a sort of thank you to Russell and Julie, because they were leaving the show and we just wanted to come up with something that showed how much we appreciated everything they had done, so that was a labor of love.”

Was there ever a ‘Ballad of David Tennant? Tennant just laughs. “There are some other videos that haven’t escaped onto YouTube. It’s probably just as well.”

Do Whovians recognize Tennant in America? “Yeah,” Tennant says, “but in different levels of intensity. I mean, at home [in Britain], it’s quite intense. Here [in the U.S.], it’s quite pleasant, because it’s like once or twice a day. That’s quite manageable. I don’t wear a hat here. I feel like I’m a bit freer. But it’s never a chore, because people usually are fairly pleasant and warm, so it’s not difficult, it’s just some days are easier than others.”

As for an overall philosophy, Tennant says, “Just keep going. Keep going and keep surprising yourself, keep having reasons to get up in the morning and keep feeling like you’re getting better and swifter and keener and sharper.”

In terms of additional thoughts about SPIES OF WARSAW, Tennant concludes, “I can’t wait to see it and I’m very excited by it and I think Coky Giedroyc, the director, has done something really very special. I think it’s going to exceed expectations.”

SPIES OF WARSAW will be out on home video April 16