JMW: Hello. This is Jean Marie Ward for BuzzyMag.com. With me today is award-winning author, DB Jackson, who is also David B Coe. Welcome, DB.

DB Jackson: Thank you. It’s good to be here.

JMW: It’s good to have you. How did a doctor of US History find himself reading and writing fantasy?

DB Jackson: I fell in love with fantasy… Actually, I was a camper at a sleep-away camp when I was 11 years old, and the theatre counselor was doing a production-an abridged production-of The Hobbit and I got cast as Bilbo Baggins and fell in love with the story and got home from that and started reading The Hobbit, and then I moved a short while later to Lord of the Rings and from there it was onto all sorts of stuff and I just fell in love with fantasy literature. And even when I was a graduate student, any chance I got to do some reading, I’d read in genre.

And when I was done with my dissertation but had not yet landed an academic job, my wife says to me “You’ve got the summer. Since the day I’ve met you, you’ve been talking about writing a novel. Why don’t you write a novel?” And so I did and the novel that I wrote that summer-or the part of the novel I wrote that summer-was the beginning of Children of Amarid, which became my first published novel. And several months later, in about March, I was offered an academic job teaching, my dream job, and literally the next day I heard from Tor Books and they said, “We are interested in buying your book.” And I chose to go with the writing and give up on the history and I haven’t really looked back since.

JMW: That’s wonderful. You have a nice, long history as a writer, more than many people in this field.

JMW: Being a doctor of US history must be a big help with your new series as DB Jackson, The Thieftaker Series. Why did you choose to set the books in the War for Independence?

And so there was a very limited timeframe in which I could write about thief-takers because they only really existed for a brief period during the… I guess during the 18th century and a little bit into the 19th century. And I thought about setting the books in London, but there are a lot of books set in London. And given that I have a PhD in US history, I wanted to be able to use that background and I thought, “You know, if I were to set these in the colonial era and I would set them in Boston, I could combine the intrigue of thief-taking and dealing with crime with the intrigue of colonial politics and the rising tensions that preceded the American Revolution.” And so the books actually take place in the decade leading up to the revolution. And so the first book happens during the Stamp Act Riot and the second happens during the Occupation of Boston and all those things that we read about in grade school. The Boston Massacre, the Boston Tea Party-those are potential fodder for future thief-taker stories and that really appealed to me. And so Samuel Adams shows up in the books and other historical figures from that dynamic time and place and it really… It has worked amazingly well with the plotting that I wanted to do for the mysteries and such.

JMW: And it’s a rather unusual period. You don’t see much fantasy set in that particular corner of the 18th century.

DB Jackson: It’s true. CC Finley-Charlie Finley-wrote the Demon Redcoat series. Actually, I guess it’s the Trader To The Crown series. Demon Redcoat/i> is one of the books in the series. And it’s a brilliant trilogy and I recommend it to anyone who’s interested in that period. But really, aside from that work and mine, there isn’t a lot going on in that period. And I think that’s not going to be true for much longer. I already know of people who are saying that they’re writing in that… It’s an incredibly fertile time to be mined by writers, both of speculative fiction and regular fiction.

JMW: And you’re leading the way.

JMW: That’s great. Is there any relationship between the world of Thieftaker and the novels you wrote as David Coe? Because I think it’s pretty obvious that you’re the same person.

DB Jackson: Yes, it is pretty… It’s an open secret, as they say. Not really, no. The Thieftaker books, one of the reasons that I’m writing as DB Jackson instead of David B Coe on this series is that the Thieftaker books are so different from everything I did before. The other stuff I did, which was a lot of fun and which I’ll get back to eventually, was alternate world epic fantasy-big, sweeping three or five book series, extended story arcs with lots of point of view characters and castle intrigue and wars and high fantasy and all of that. And as I say, it’s fun stuff, but this is a very different kind of series. It’s darker. It’s leaner. It’s set in the real world. I have one point of view character. And it very much has the feel of an urban fantasy. It’s just set in the historical period.

JMW: Breaks can be a lot of fun and basically get the creative juices going.

JMW: Speaking of creative juices, you’re also a founding member of the writing blog, “Magical Words”. What effect has the blog had on your writing?

DB Jackson: Doing the blog, which is really a blog devoted to the craft and business of writing, and a lot of what it’s done is just it’s forced me to be more introspective about my own process. I think that writing about writing forces me to break down what I do into its component parts and I think that’s a healthy exercise for any of us who get so involved in a craft or an activity that we start to take for granted the things that we do on a day-to-day basis. What “Magical Words” does for me is it allows me to take a look kind of through an elongated lens at what it is I do on a day-to-day basis and in making suggestions for aspiring writers, I invariably come up with ideas that I might not have thought of otherwise for my own writing and ways that I can make my process more rational or overcome problems that I find book-to-book, whether it’s stalling at the 60 percent mark, which seems to happen to me every time I write a book, or avoiding those crutch words that all of us lean on every now and then when we find that we’ve used the same facial gesture or something like that time and again in a book. “Magical Words” makes me think about that stuff and so in teaching, I’m learning, and it’s a very helpful process for me.

JMW: And you get a bit of the teaching that you studied for in.

DB Jackson: Yes, a little bit. I mean I got into history originally because I wanted to be an educator and I actually-in addition to “Magical Words”-I do some mentoring as an outside mentor at a college, actually at a university in an MFA program, and I do teaching at writers’ workshops and things of that sort and so I keep my hands in it. And people talk about kind of giving back and paying things forward and stuff like that, and I really think there is something to that. I was helped out by a lot of experienced writers when I was getting started and being able to do the same thing is very gratifying.

JMW: Great. What are you working on now?

DB Jackson: What am I working on now? Well, there is a third Thieftaker book and a fourth Thieftaker book in the works. The third Thieftaker will be out in the summer of 2014, so pretty soon. And the fifth Thieftaker is at this point pretty much off my desk and in production and ready to go and I have a contemporary urban fantasy that I’m working on and some Thieftaker short stories and I have plenty to keep me busy. I also am a father. I have a daughter in college and another daughter in high school and they keep me very busy as well.

JMW: As well they should.

JMW: It’s a daughter’s job. Anything you’d like to add?

DB Jackson: No, it’s been a pleasure doing this. It’s nice to talk to you and I appreciate the time.

JMW: We appreciate having you. Thank you, David.

JMW: And thank you for BuzzyMag.com 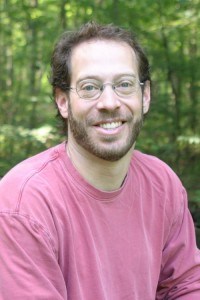 -Be a Fan
and read Announcements on