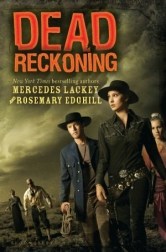 Yet another entry in the subgenre of zombie steampunk westerns.

This is the story of three young people, Jett Gallatin, [Honoria] Gibbons, and White Fox, brought together by circumstances. Each of them is a unique person, traveling on a different quest, and none of them expected to run into zombies in the quiet town of Alsop, Texas.

Jett is a young woman on a mission. She keeps herself safe in the wild west of 1867 by masquerading as a man–a gambler and a gunslinger–ever conscious of the dangers of being found out. She’s taught herself to control her fear, and it’s worked so far, until the undead come along.

Gibbons is a forward-thinking woman of science, convinced that every mystery can be explained. In many ways she is like Houdini, a professional skeptic, traveling the country debunking claims of fantastical inventions and amazing creatures. She is schooled in scientific methods and is herself a gifted inventor. She trusts to her quick wits (and her coach gun) to get her out of any trouble.

White Fox was raised by the Meshkwahkihaki [Algonquin] Indians from an early age, despite his white skin. He is an army scout, aiding friends among the enlisted men by checking on their families. An expert tracker, his skills are invaluable in locating the undead–but that doesn’t explain why zombies have suddenly appeared and started ravaging small towns.

When these three come together, they end up pooling their strengths to investigate the terrifying mystery that baffles them all: where did the zombies come from and how can they be stopped? The closer they come to figuring things out, the more the enigma deepens. People have disappeared without a trace, and clues are few and far between.

I loved the attention to detail–the old west came alive for me while I was reading this story. I was rooting for the characters as they struggled and I became completely invested in what was going on. While this is technically considered a young adult novel–I recommend it for anyone who enjoys a well-told tale.


The story is intricate and well-plotted, the characters are absolutely amazing, and the plot sneaks up on you–slowly building up until you are rocketing along to the finish. Along the way there are lots of surprises, and just when you think you have it figured out, things turn abruptly in quite another direction. When you finally reach the end, you’ll be looking around for the next book in the series. Too bad it hasn’t been written yet . . . .

Jett is a girl disguised as a boy, living as a gambler in the old West as she searches for her long-lost brother. Honoria Gibbons is a smart, self-sufficient young woman who also happens to be a fabulous inventor. Both young women travel the prairie alone – until they are brought together by a zombie invasion! As Jett and Honoria investigate, they soon learn that these zombies aren’t rising from the dead of their own accord … but who would want an undead army? And why? This gunslinging, hair-raising, zombie western mashup is perfect for fans of Cowboys vs. Aliens and Pride & Prejudice & Zombies.