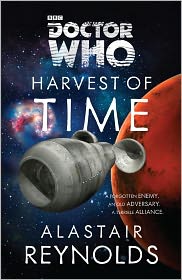 Harvest of Time
by Alastair Reynolds

Back when they themselves indulged in the sort of benevolent interference that subsequently saw the Doctor banished to planet Earth, the Time Lords of Gallifrey rounded up as many pathologically belligerent species as practicable and sent them on a prison ship far into the future. Now (and at the same time, then) one of those races – the implacable Sild – is escaping through ruptures in time and scuttling its way towards a genocidal invasion off the coast of England, circa 1971/1972. Still in exile and indentured to UNIT, the Doctor finds that to save the world he must also safeguard his nefarious archenemy.the Master.
Ever since 1964 when Dalekmania spawned Doctor Who’s first novel, Who in written form has rarely lived up to its potential. Novelizations of the original series were entrusted to the programme’s scriptwriters and were threadbare by design. (Stephen Gallagher, the only bona fide novelist involved, insisted on a pseudonym when his two contributions were pulped down by the editorial juicing machine.) Subsequent publishing ventures, though aiming higher, nevertheless tended to fall short of anything much beyond the nostalgic reminiscences of erstwhile child viewers. Granted, there were one or two exceptions – Stephen Marley’s Managra, for instance, and Simon Messingham’s Tomb of Valdemar – but for the most part, sad truth be told, Doctor Who books offered would-be librarians little choice but to shelve them under the traditionally lukewarm classification of ‘Better than
nothing, I suppose’.

Now, at last, the chameleon circuit has been fixed and the TARDIS range has been revamped both inside and out.

Following the success of New Series Who on television, the BBC no longer outsources the rights to publish Classic Who novels, and instead (in conjunction with Random House) has started putting out its own series featuring Doctors One through Seven. New releases are sparse, but to date have been packed full of dimensionally transcendental feng shui and a long-overdue focus on quality over quantity – genuine, hardcover novels by established SF authors: Shada by Gareth Roberts (emancipating then invoking one of three Douglas Adams scripts that the BBC left stoppered in the genie’s bottle while Adams was still alive); The Wheel of Ice by Stephen Baxter; and now Harvest of Time by Alastair Reynolds.

Reynolds writes in an uncomplicated manner – plot; characterization; intrigue-cum-discovery – telling his story with directness yet also sufficient finesse to prevent it from becoming brash or insipid. Harvest of Time carries the quintessence of Pertwee-era Who (early- to mid-1970s England in drab but glorious colour) and in harking back to the television serials of those halcyon days, not only does Reynolds as good as implant newly ensconced memories in the minds of longstanding Doctor Who fans, he also presents a time capsule by which younger viewers may experience (sans the datedness that necessarily comes across on DVD) some of the excitement and seriousness, the flamboyance and gravitas, the earthbound immediacy that characterized Jon Pertwee’s stories at their time of broadcast.

This great strength, of course, comes wrapped in a limitation – by dint of its manifest fidelity to the parent programme, Harvest of Time

necessarily must offer more to Doctor Who aficionados than to readers who remain uninitiated – and if one were to offer a mild criticism of Alastair Reynolds’s novel then it would be that, like many of the original Third Doctor stories, its build-up is rather more compelling than its resolution. This qualm aside, however, Harvest of Time

proves a worthy third book in the new series of Doctor Who publications, bringing a science fiction bearing and substance to what historically has been merely a dilettante’s playground.

One of science fiction's most acclaimed authors delivers a spectacular original novel in the Doctor Who universe featuring the Third Doctor, as played by Jon Pertwee.