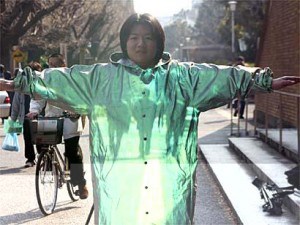 Dear Sharon,
In 2311, with the signing of the Treaty of Algeron, the Federation explicitly agreed not to develop cloaking technology. The Bajoran Provisional Government also outlawed cloaking devices, stating that the possession of such a device is highly illegal.

Metascreen – A prototype Metascreen is a claimed cloaking device, which is just few micrometers thick and to a limited extent can hide 3D objects from microwaves in their natural environment, in their natural positions, in all directions, and from all of the observer’s positions. It was prepared at the University of Texas, Austin by Professor Andrea Alù.

The metascreen consisted of a 66 micrometre thick polycarbonate film supporting an arrangement of 20 micrometer thick copper strips that resembled a fishing net. In the experiment, when the metascreen was hit by 3.6 GHz microwaves, it re-radiated microwaves of the same frequency that were out of phase, thus cancelling out reflections from the object being hidden. The device only cancelled out the scattering of microwaves in the first order. The same researchers published a paper on “plasmonic cloaking” the previous year.

Plasma stealth – Plasma at certain density ranges absorbs certain bandwidths of broadband waves, potentially rendering an object invisible. However, generating plasma in air is too expensive and a feasible alternative is generating plasma between thin membranes instead. The Defense Technical Information Center is also following up research on plasma reducing RCS technologies. A plasma cloaking device was patented in 1991.

Optical camouflage is a kind of active camouflage in which one wears a fabric which has an image of the scene directly behind the wearer projected onto it, so that the wearer appears invisible. The drawback to this system is that, when the cloaked wearer moves, a visible distortion is often generated as the ‘fabric’ catches up with the object’s motion. The concept exists for now only in theory and in proof-of-concept prototypes, although many experts consider it technically feasible.