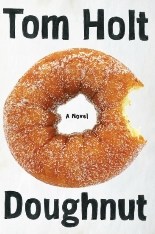 When physicist Theo Bernstein shifts a decimal place the wrong way and accidentally blows up the Very Very Large Hadron Collider, he loses everything: his reputation; his job; his wife; his money. But just when he’s reached the nadir of existence, an odd bequeathal from his old colleague and mentor gives Theo a glimmer of hope… which turns out to be just some bright spark stockpiling gunpowder beneath the laws of physics. Plunged into an unfathomable eddy of weirdness (where the only way home is through the hole of a doughnut) Theo soon discovers that it’s possible to hit rock bottom not merely in this life but in an infinite multiverse of ‘Theo Bernstein, this is the stinking, underfoot mess of your…’ lives – a veritable shitzkrieg, the bottled essence of which his erstwhile friend has kindly left behind. Without instructions.

It seems strange that Tom Holt hasn’t always been appreciated in America, for the writer he most obviously resembles is US cult-SF’s favourite Brit: Douglas Adams. Perhaps it’s because Holt has stuck grimly to UK spelling (hence ‘Doughnut’), or maybe because his output is suspiciously prodigious (matching Adams’s early productivity, yet to date sustaining it for twenty-five years). Or possibly – and this could only be the case in the sort of infinite multiverse scenario that Holt posits – nobody in the US of A has cottoned on that the magic realism overlay of Holt’s work belies a sophisticated, ideas-woven science fiction in which Arthur Dent, Ford Prefect and Co. could well have faffed about to their hearts’ content.

If one were to raise a highbrow in criticism of Doughnut

, the arched thrust would be that its protagonist is a bit lukewarm and that some of the plot is just sticky glazing that serves no purpose in terms of character or narrative arc. It’s just more of the same, such a critic would say. The whole book is just something for the reader to hold while Tom Holt’s messing about, being funny. Well, firstly that’s not true (thematically, there’s more than a cinnamon dusting of self-determinism at play, while in terms of character and plot there’s – spoiler -a rather Sixth Sense-ish revelation to look forward to); but even if it were true, then what of it? The same could be said of Arthur Dent – his downtrodden Englishness notwithstanding – and hardly anyone would notice if you took the actual plot out of Hitchhiker’s.

Ideas maketh the man, and with Doughnut

Tom Holt shows himself to be the most intelligent and inventive, darkly laconic purveyor of humour this side of the new millennium. Holt builds comedy with a dumbfounding ease reminiscent of MacGyver: give him two Paddle Pop sticks, some chewing gum and an old shoelace and he’ll blow the lid right off any canned corn sitcom. In fact, such is Tom Holt’s ability to subject his characters to near-lethal doses of universal irony, one might almost suspect him of holding genuine, fatalistic belief in the perversity of the world he describes. In much the same way, then, that Janet Frame brought a real sense of mental unbalance to her writing, Holt narrates with the long-suffering insightfulness of Eeyore the Donkey stuck fully-aware in a reality where everyone else seems insanely happy and where the laws of comedy turn even the most pessimistic observations to mirth.

And like the Eeyore who rescues Theo Bernstein from imprisonment (or worse) in the post-apocalyptic Disney world, Tom Holt is a true scientist.Deliciously droll; the sort of writing that Sisyphus could happily roll uphill for all of eternity: Doughnut, is his latest offering.

The doughnut is a thing of beauty.
A circle of fried doughy perfection.
A source of comfort in trying times, perhaps.
For Theo Bernstein, however, it is far, far more.
Things have been going pretty badly for Theo Bernstein. An unfortunate accident at work has lost him his job (and his work involved a Very Very Large Hadron Collider, so he's unlikely to get it back). His wife has left him. And he doesn't have any money.

Before Theo has time to fully appreciate the pointlessness of his own miserable existence, news arrives that his good friend Professor Pieter van Goyen, renowned physicist and Nobel laureate, has died.

By leaving the apparently worthless contents of his safety deposit to Theo, however, the professor has set him on a quest of epic proportions. A journey that will rewrite the laws of physics. A battle to save humanity itself.

This is the tale of a man who had nothing and gave it all up to find his destiny - and a doughnut.