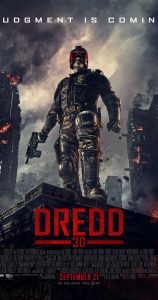 From the beginning voice over by Karl Urban, it’s clear this is not the 1995 adaption of Judge Dredd –it’s a darker, grittier, Christopher Nolanesque treatment of the material that never lets up. For fans of the original comic book (2000 AD), the look and feel of this dystopian future is just what they were looking for.

Karl Urban is a big guy. This movie puts him in a bad-ass costume, and a helmet that he never takes off, making him even bigger, and very threatening. He manages to act up a storm, conveying an amazing amount with just his facial expressions, body language, and head movement. He came across as strict, compassionate, deadly, and very serious, as well as incredibly competent.

The plot is fairly simple–an experienced cop (judge) takes a rookie out for a day’s work to assess whether she is qualified to be a judge or not. Of course, they’re in Mega City One and things get complicated in a hurry. Only a fraction of the crimes there can be investigated, because there just aren’t enough judges to go around. The big bad is Ma-Ma, a former prostitute who is now a nasty drug lord. She hesitates at nothing, and has enough charisma to draw fanatically loyal people to her. Ma-Ma and her clan are bad, violent people who will stop at nothing to get the outcome they want.

Some of the crimes being investigated involve a drug called Slo-Mo, which makes time seem to pass at a fraction of its real speed–this allows for some really next special effects. The graphics used for internal security at Peach Trees are really well done, too. Often computer graphics are so futuristic I find them hard to believe–these seemed just a touch ahead of what we have now.

The Lawgiver (weapon) used by the judges fit right in, and the various ammo modes well. The maze-like complexity of the interior sets, and the use of concrete to make things look more imposing was impressive. Outside, there was enough of modern day left to make this dystopian future all too real, while giving us a look at some scary possibilities. The Hall of Justice in particular was simple, but oh-so-awesome. The Lawmaster (motorcycles) used by the judges to get around the city had a substantial look to them. Just what law enforcement needs: solid, maneuverable, and fast.

Olivia Thirlby (as rookie Judge Anderson) stood toe-to-toe with Karl Urban and held her own admirably–she was strong with just a hint of vulnerability, and tough enough to stand up to Dredd. And she did it all standing nine inches shorter than Urban! Lena Headey (Ma-Ma) embraces her evil side and is a formidable adversary.

I had some issues with the deus ex machina aspects of the story–to keep the plot moving, any investigation was kept to a minimal, in favor of the information just being available when needed (and not before). Very sloppy storytelling. But it did allow them to maximize chase scenes, gun battles, and things blowing up.

This is a must-see for comic book fans, and anyone who likes high-powered gun fights and things going boom. 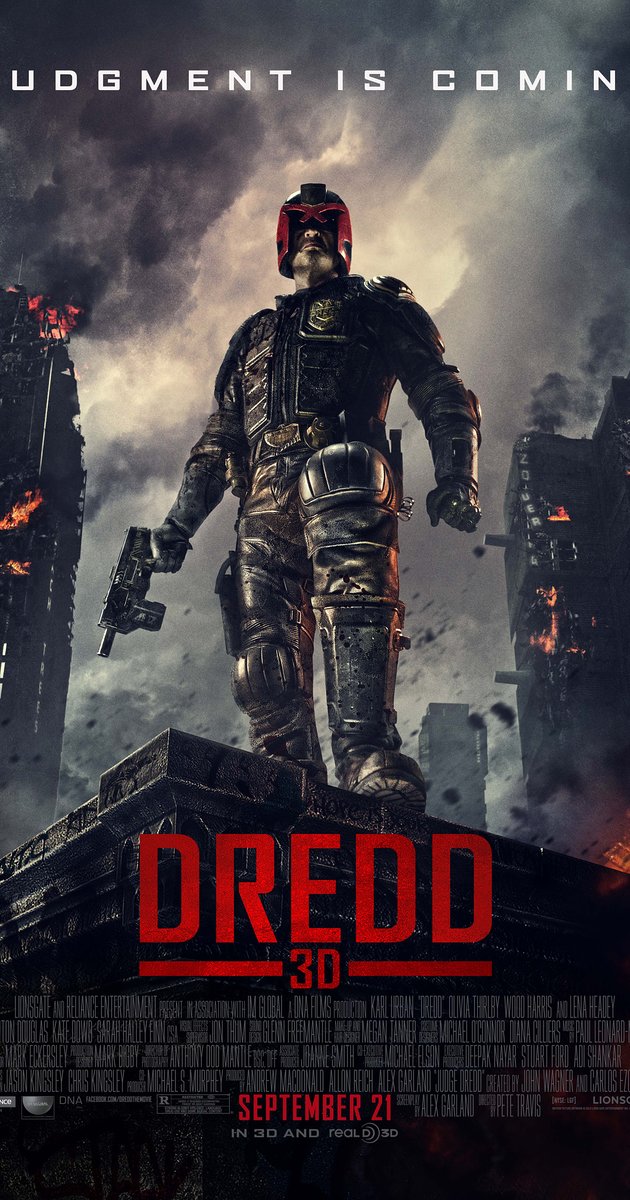 Article Name
Judge Dredd Movie Review
Description
From the beginning voice over by Karl Urban, it’s clear this is not the 1995 adaption of Judge Dredd–it’s a darker, grittier, Christopher Nolanesque treatment of the material that never lets up. For fans of the original comic book (2000 AD), the look and feel of this dystopian future is just what they were looking for.
Author
Elektra Hammond
BuzzyMag.com