Blast from the past! Buzzy Blogger tells her experience of seeing Farscape for the first time 10 years after it’s initial airing in 1999. 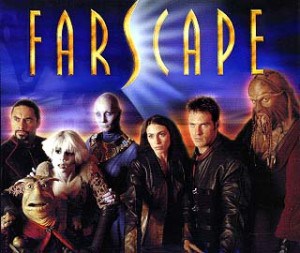 Farscape is a Science Fiction television series that follows American astronaut, John Crichton on a mission that goes completely wrong. Trying to return earth, he finds himself entangled with a group of rebels fighting a war against an oppressive militaristic empire – The Peacekeepers.

first came on the air, I remember thinking to myself “I hope it does well.” I didn’t watch it though, it came on the Sci Fi channel on Saturday, and in our house that is when we main line gamed, all day, stopping only long enough to run to the bathroom or prepare some food that could be consumed while still chucking dice.

One day, we had to take a break in the game. The only thing that would make us stop long enough to turn on the TV would have been an earthquake or that the GM needed time to prepare the next segment. At any rate, we put on the Sci Fi channel and Farscape was just starting. We decided to go ahead and watch it, after all, it was exactly the sort of show we would have watched if it came on at any other time, it looked pretty good in the commercials, and it had eye candy for both the boys and the girls.

Looking back, I can honestly say that we had the great misfortune to happen upon one of “those types of episodes.” You know the sort, that when seen apart by an uninitiated viewer who is not familiar with the characters or anything else about the show for that matter, it leaves one with a rather low opinion of the rest of the series. In short, we thought that it was most likely the worst show we had ever seen in our lives, but in all fairness, Lexx had not yet aired.

So now, years later, I found myself in possession of Farscape, season 1. I have to admit that I was hesitant to watch it; after all, memories from my youth sprang forth and sent red flags flying. “As busy as you are,” my subconscious warned “do you really have the time to invest into a show that you already decided you did not like?” Although the voices in my head had a point, admittedly, the other voices that prattle on up there reminded me that I can’t honestly say that I ever gave the show the try.

To settle my internal dialogue, I vowed to write a full Farscape review about the experience. It was then “working” ergo a job, and not wasting time.

So, my assistant and I made a day of it. We sat down in the living room, bags of junk food and diet soda within arm’s reach. Secretly, I was really wanting to newly discover my disdain for the show and was all set to let loose with the snark, but I had promised myself and the score of voices in my head that I would give it a serious attempt.

I have to say I was shocked from the start. The pilot episode was not bad. Was it mad brilliant and changed the course of my life? No, it did not, but it was far superior to other pilot episodes I had watched. For instance a TV series that I loved, Firefly

, had an awful pilot episode and had that been the first episode if the show I had seen wild horses could not have dragged me to watch another episode. 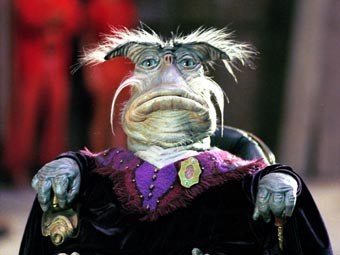 Dominar Rygel XVI was the ruler of the Hynerian Empire before his cousin, Bishan, overthrew him. The Peacekeepers then took him prisoner, but were unaware that Rygel was able to escape without detection. He was then able to organize his fellow prisoners to orchestrate a revolt.

But the pudding was not yet proofed, I had to watch more to see if Farscape was going to sink or swim. And then I watched another and another.

First of all, a person has to accept the fact that watching this TV show some 10 years after it originally aired one’s expectations of special effects cannot be so high. That, and you have to be willing to choke down that one of the characters is a Muppet. Yes, I said Muppet. I haven’t watched Sesame Street since I was kid, and Rygel, the Muppet in question was better than one you’d see on Sesame Street, but on par with a really good Muppet you’d see on the Muppet Show.

So, let’s assume that you soldier through the fact that Rygel is a Muppet. I found myself kinda liking the show. It helped that the main secondary character Aeryn Sun and I think almost exactly alike. I found myself saying aloud her next line almost as she delivered it. Scary that, but also kinda neat. I had no problem with the other characters and saw the need for them on board the ship. But what made me really like the show was Ben Browder’s performance as John Crichton. 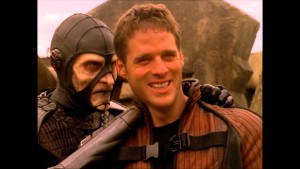 John Crichton the American astronaut accidentally catapulted through a wormhole across the universe, thus creating the main plot line. As one of the more comical characters, John had a tendency to spew American insults at his enemies to confuse them, as they have no idea what he is talking about! Hilarious.

John was your not so typical Stranger in a Strange Land archetype. Yes, he was the character who knew and asked all the questions that led the viewer through the new frontier, in this case “outer space” but he was more than that. John was also an American. His courage and bravado was only outshone by his inflexibility to let his moral compass be lead astray by alien customs and expatiations.

John insisted on doing the right thing all the time. It was never a matter open for debate or discussion. If someone disagreed with him, he was not foolish enough to argue back, he just went and did the right thing anyway behind your back. The only problem with John’s way of thinking is that his American Conquering Hero mindset was not usually the best route for solving the problem of the week, and his alien friends more often than not had to bail him out rather than come around to his way of thinking. I’m sure that this was some sort of Hollywood anti-government plot against whoever was in office. (BTW, have you ever noticed that Hollywood is always anti Whoever-is-in-the-White-House?)

Well, I like John Crichton. It didn’t hurt that Ben Browder, the actor who played our hero was then and is now as cute as can be, and more so once his character discovered leather pants in space. But I feel that had it not been for Browder being able to carry out the writer vision of Crichton the show wouldn’t have lasted a season, let alone the four that it did.

I am sad to say that after season four of Farscape

there is no more. I don’t know why is was canceled or what took its place in the budget. I can say this, Lexx, came and went because God is good and loves me so. Stargate is still on the air in some incarnation or another. I never did like that show. The movie I liked a lot, but the TV show, not so much. In truth, not at all. Tripping the Rift was a wonderful animated experiment in failure. Apparently there is a limit to the fart and toilet jokes a person can watch.

I wish I had a TV scale of how I rank movies. Farscape was no Firefly, but as good as Space, Above and Beyond. I enjoy watching the episodes and thoroughly enjoyed Ben Browder’s performance. In fact I have sought out other TV shows he was in and even sat through an episode of Stargate Atlantis because of him. This may sound familiar, but it didn’t do anything for me.

Browder was a hoot and as good as ever, but again it was one of those episodes, and compounded with the fact it had a time loop and a multiverse coming together – it was too much for me to choke down in one sitting. Fortunately, Brower did other stuff, including an awesome audiobook narration for Alan Dean Foster’s Interlopers. That is money well spent. Next time you’re stuck in traffic from your commute to work, you’ll wish you had that to listen to.