Waylaid in their quest for the orb of the Air, Magiere, Leesil, Chap, and Wayfarer have all been wrongly imprisoned. But it is Magiere, the dhampir, who suffers the most as a cloaked interrogator employs telepathic torture. 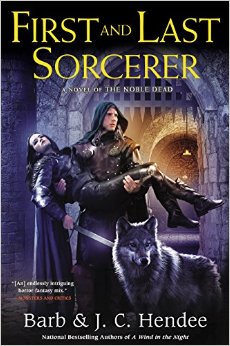 FIRST, LAST AND ONLY DRAFT.

In a world where e-readers proliferate and lovers of the printed word fall begrutten to their knees outside the withered facades of second-hand bookshops, it is tempting to think that any novel judged fit to carry on living in corporeal form must be of a superior species. This goes doubly for hardbacks, and doubly again for those endorsed by major publishing houses. Or then again, does it? Maybe not. If blockbuster films repay their bloated budgets through pointless sequels and by re-treading the paths of least intellectual resistance, might not some bestselling authors have been shoehorned into a similar arrangement? Such would appear to be the case offered in point by way of Barb and J. C. Hendee, whose latest quest fantasy novel, First and Last Sorcerer, has just hit the shelves in solid, perfect-bound defiance of all critical appraisal. In electronic format, yes, but also in beautiful hardcover, we are presented with magic-wielders, lost orbs, elves, vampires, wolf-creatures and spectral body-snatchers. There are princes, swordsmen, guards, assassins, and there too the usual dose of hood and cloak, arrow, tooth and claw. There is also telepathy at play, although readers will need none themselves to plumb the subtleties of the Hendees’ working process, nor indeed to glean this reviewer’s opinion of the book.

First and Last Sorcerer is the fourth installment of the third series of The Noble Dead Saga, which to date comprises thirteen volumes. Notwithstanding any criticisms that might be leveled at this most recent offering, clearly Barb and J. C. Hendee have found their niche! New readers, of course, might well be wary of entering a fantasy world this late in the picture, but disorientation is not actually the problem here. The Hendees diligently describe each protagonist and magical creature. (Indeed, they explain the origins of two wolf-descended majay-h? in duplicate, twelve pages apart, as if the authors took a section each but failed to compare notes.) We’re told what is happening, and why. We’re given history; geography; character viewpoints: everything that’s needed to come to grips with the story. What is lacking, sad to say, is a distinct authorial voice. Hendee & Hendee have crafted a setting rich in imagination and dense with diacritics (the slathered hallmark of world-building turned fervent), but much though they themselves might live and breathe the minutiae of their creation, in truth there is little incentive for readers to do likewise. The writing is prosaic at best; more like stage directions for the players, or perhaps a scenario guide for freelance graphic novelists. Those reviewers whose comments grace the back cover talk of action, excitement, epic fantasy and horror. Lord of the Rings is mentioned, and so too Buffy the Vampire Slayer. But First and Last Sorcerer is epic only in a functional way, like a phone directory, and comes no closer to pumping the adrenaline or cutting to the viscera than bland pronouncements to the effect, ‘They ran away’ or, ‘She was tortured’. There is nothing here to stir blood, mind or soul; nothing, in fact, but an odd sort of literary accountancy in which the whole of the book adds up to considerably less than the sum of its words. Presumably, those back-cover spruikers just closed their eyes and imagined what the film might look like.

Lacking any originality in expression, yet evincing both an aversion to pronouns and a disquieting propensity to corral certain terms with quotation marks, First and Last Sorcerer is a book that newcomers would do well to scope out in e-form, rather than committing to the hardcover. Many will find it “unreadable”.

Shop First and Last Sorcerer:
A Novel of the Noble Dead

When her friends Magiere, Leesil, Chap and Wayfarer are wrongly imprisoned and tortured telepathically, Wynn Hygeorht and her companions seek out a domin for help in freeing them, while a spectral undead with the power to invade anyone living hides inside host bodies. By the best-selling authors of A Wind in the Night.