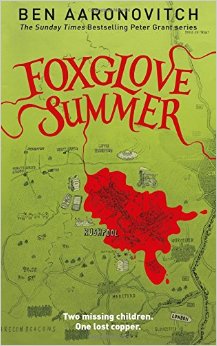 Foxglove Summer is the fifth book in the Peter Grant series by Ben Aaronovitch, and it seems to be following a pattern put in place with the last two books, Broken Homes and Whispers Underground. Those two novels read very much like one book split into two, and Whispers Under Ground seemed like only half of a book. Foxglove Summer feels the same way, it’s an excellent story and a really fun read, but the ending feels out of place.

The book starts with apprentice magician and city savvy London police officer Peter Grant being shipped out into the countryside to interview a retired magician. Peter is still hurting from the events of Broken Homes and he comes across as both courageous and fragile, a man trying to rebuild himself into someone he recognizes. Fortunately for readers Peter falls back on his sense of humor when then the going gets tough, and Foxglove Summer is one of the funniest books in the series, particularly when Peter is able to play off of Beverly Brook, his girlfriend, part time goddess and also a small river in London.

It makes sense in the book.

Foxglove Summer starts slow, but it doesn’t take long for the main plot to snare Peter into staying in the English countryside. Two young girls have gone missing and there are signs that the case is in Peter’s wheelhouse. He has to team up with a local constable and Beverly to try and figure out exactly what’s happened to the girls and why. Along the way he gets help from ancient spirits living in a caravan, an elderly wizard and a woman with a very close bond with her bee hives.

One of the strengths of the series is that as much fun as it is to see Peter doing magic, it’s not the only special thing about him. He solves more of his problems by being smart than by being powerful. There’s a sequence in the second half of Foxglove Summer where he rigs up a magic detection device out of old cellphones that is both totally believable and stand up and shout awesome. Because he solves his problems with humor and brains over raw power, he triumphs over some very bad situations and it never feels like he’s being saved just because he’s the protagonist.

This isn’t the book to start the series with, there’s a lot of callbacks to previous books and unfortunately the ending of Foxglove Summer abandons this in favour of an ending that just doesn’t fit the rest of the story. It’s very nearly a deus ex machina ending and it reads like it was written for a different story. This reinforces the feeling that Foxglove Summer is only half of a longer sequence.

This shouldn’t put anyone off of reading Foxglove Summer though. It’s still a fun, funny and exciting story and it pays off in both big and small ways (there are both Terry Pratchett and Game of Thrones references that work brilliantly) despite the ending. It’s quite possible when the next book comes out it will put everything in Foxglove Summer into context the way Broken Homes did with Whispers Undergound and in retrospect the ending of this book will fit into the story as a whole.

Aaronovitch is an excellent writer, and Peter Grant is one of the most compelling protagonists in urban fantasy and the cast of back up characters feel like real people instead of plot devices. While Foxglove Summer has its flaws it’s still a blast to sit down with and binge read in a day or two.

It’s purely routine—Nightingale, Peter’s superior, thinks he’ll be done in less than a day. But Peter’s never been one to walk away from someone in trouble, so when nothing overtly magical turns up he volunteers his services to the local police, who need all the help they can get.

But because the universe likes a joke as much as the next sadistic megalomaniac, Peter soon comes to realize that dark secrets underlie the picturesque fields and villages of the countryside and there might just be work for Britain’s most junior wizard after all.

Soon Peter’s in a vicious race against time, in a world where the boundaries between reality and fairy have never been less clear....