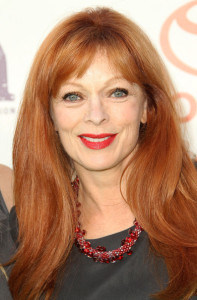 ABC’s new series RESURRECTION (Sunday nights at 10 PM) and the French series THE RETURNED, aka LES REVENANTS (which aired its first season last year and will have its second this year in the U.S. on Sundance TV), both deal with small towns where people who have been dead for years suddenly and inexplicably return, seemingly whole and as themselves, to their stunned families. Despite their thematic similarities, the two shows are unrelated. To add to potential confusion, RESURRECTION has been adapted for television by Aaron Zelman from a novel by Jason Mott entitled THE RETURNED.

Fortunately, for viewers of both (as well as everyone involved in making the shows), the characters and casts are entirely different, which makes the two series very different experiences. In RESURRECTION, Frances Fisher plays Lucille Langston. Lucille and her husband Henry (Kurtwood Smith) lost their eight-year-old son Jacob (Landon Gimenez) thirty-two years ago. Henry doesn’t know what to think when U.S. agent J. Martin Bellamy brings a little boy who claims to be Jacob to the door, but Lucille accepts the miracle from the first moment.

Fisher is one of those actresses who works constantly in both television and film. Her most widely-seen performance is as Ruth DeWitt Bukater, the mother of Kate Winslet’s Rose, in TITANIC. Another notable role for the British-born performer was as Strawberry Alice, the frontier madam who raises money to hire Clint Eastwood’s bounty hunter to kill the men who savaged her workers in UNFORGIVEN.

Earlier in the day, Fisher participates in a Q&A session for RESURRECTION held by ABC for the Television Critics Association (TCA). Later that evening, at a party thrown by ABC for its talent, creative staff and TCA in the same Pasadena hotel, she sits down to talk about her work in RESURRECTION.

Fisher says she wasn’t necessarily looking to do a television series when the project was submitted to her. “I’m always looking for good material, whatever medium it comes in, and it just happened to come in the form of a television pilot that I loved. My agent sent me the script and I read it, and I said, ‘I love this, I want to meet with them.’ So that’s what I did.”

Mott’s novel made a big impression, Fisher says. “He really understands the minute moments in a human being’s life. I thought he described them quite well. And it was interesting, because we all [Mott, Fisher and RESURRECTION’s primary creative staff] met, and we had some dinners together. And he told us the impetus for writing the story was that he had a dream. His mother had passed, and he had a dream that he was sitting in his kitchen with her and they had a long conversation, talking about things that they’d never talked about before. And when he woke up the next morning, it was so real to him that he thought, ‘Oh, my God, Mom is back.’ And he went down to the kitchen, and of course, there were no remains of whatever they were eating and drinking. And it prompted him to ask the question, ‘What if?’ And I think that RESURRECTION stars us all on that journey in the same way – what if?”

One of the most appealing aspects of playing Lucille is the extraordinary happiness she experiences on being reunited with her little boy, Fisher relates. “It was wonderful to play someone whose prayers are answered. I think we can all relate to that. We’ve all lost someone in our lives, and we’ve all wondered what it would be like to talk to them one more time, be with them one more time. So for my character, Lucille, her wish comes true. Her prayer is answered. She gets her boy back. It’s pure joy. As an actor, [playing] that is easy. That’s what I’m hired to do. You just go into your own life and pull on feelings and memories of your own and just translate that into the text and into the action.”

As an actress, is Fisher often called upon to portray that pure an emotion of any sort? “Well, it depends on what the script calls for,” Fisher replies. She sees Strawberry Alice as a character who embodies a different but equally powerful set of emotions. “I think in terms of purity, she had one purpose and one purpose only – revenge. I don’t know if there was any doubt in her mind at all. I think she just put her boots on, said, ‘We’re going to do this and there’s no looking back.’”

There may or may not have been other roles that have called for such unambiguous sentiments, Fisher says. “We’re at a party right now. I can’t think of all of the characters I’ve played. But my acting teacher, when I was studying, said, ‘You have to be one point at something and your character has to be one point, so you know what your through-line is.’ And I think every character I’ve played has pretty much had an intention and tried to fulfill it, and I think that’s what makes a character clear, unless you’re playing somebody who’s lost, who doesn’t know what they want. That can be interesting, too, but I don’t think I’ve ever [played that kind of person] – I gravitate more toward strong characters who are trying to achieve something.”

Playing opposite Kurtwood Smith is another aspect of RESURRECTION that Fisher enjoys. “I love Kurtwood. He’s great. He’s got a great sense of humor, he’s very grounded, we have a good communication and we play very well together, we play off each other really well. It’s a joy to work with him.”

Playing Lucille has had its physical challenges, Fisher notes. “When I had to pick Landon up as a dead weight [after Jacob has fainted] and put him on the bed, I remember the first time I did it, Kurtwood was standing by the doorway and he said, ‘You know, you’re going to have to do that at least thirteen more times for the master and the close-ups and the turning around.’ I went, ‘No, no, I can do it,’ because I had this urge to take care of my son and I picked him up to put him into bed, and he was laying there unconscious. By about the thirteenth take, I was like, ‘What the hell did I do that for?’” she laughs. “So when we turned around, I said, ‘Landon, I’m just going to pretend to pick you up, because the camera’s on Kurtwood. You just get yourself into bed, because my back is killing me.’ That was the most physically challenging thing I had to do. You don’t think about it, because you just do it in the moment, and you think, this is what a mother would do. A mother would do it once, not twenty times.”

In January, Fisher appeared on CASTLE as an Anna Wintour-type magazine editor. Asked about upcoming projects, Fisher relates, “I have an independent film, THE M WORD, and I have a film directed by George C. Wolfe, I costar with Hilary Swank, called YOU’RE NOT YOU, that’s coming out sometime this year. I’m not sure what the release date is yet. It’s based on a book called YOU’RE NOT YOU, about a woman who gets a terrible degenerative disease, and it’s how her family relates to her and how she has an unlikely alliance with someone who comes to take care of her and how that relationship evolves. Hilary plays the character and I play her mother.”

Is there anything else Fisher would like people to know about RESURRECTION? “I always just say, ‘If you want to know more, stay tuned.’”

Abbie Bernstein is an entertainment journalist, fiction author and filmmaker.