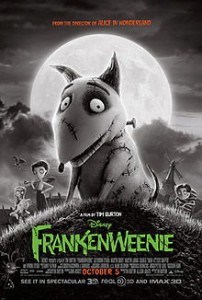 “It’s alive! It’s moving! It’s alive!” Who doesn’t remember that iconic line from the original Frankenstein (1931)? Now Tim Burton has given us a dark comedic take on the tale, done in stop-motion animation, in glorious black and white. It has all the hallmarks of awesome: a stellar cast, a Danny Elfman soundtrack, and Tim Burton’s hallmark quirky characters.

You already know the story: Victor Frankenstein, science nerd, amateur film-maker, beloved dog-owner tragically loses his beloved dog Sparky, and brings him back in a homage to the classic Mary Shelley tale.

It’s cute, it’s intense, it’s dark, and it’s funny. The overall look of the film is classic Tim Burton, with a dash of goth (helped along by the black and white color scheme–everything is a little dark). All of the characters are very stylized.

The characterization of Sparky is great–he’s a dog anybody would want to have. In fact, all the pets in the film are well done. This film centers on kids, yet most of the adults are also multi-dimensional characters, capable of learning and growing.

My favorite thing about the movie was the homage to classic horror and monster films, especially the original Frankenstein–every loving little touch made me smile. The more of a classic horror fan you are, the more you’ll like this. Victor’s lab had a bit of a steampunky feel to it as well, goggles and all, always a crowd pleaser.

All of the voice actors did a hell of a job bringing these characters to life–absolute standouts were Charlie Tahan as Victor, Atticus Shaffer as Edgar ‘E’ Gore, and Martin Landau as Mr. Rzykrushki, Victor’s science teacher.

Six months ago, I would have raved about the amazing animation. But ParaNorman came out in mid-August, and raised the bar considerately for stop-motion animation. Frankenweenie suffers some by comparison.


If you’re unaware of the background, this is a remake of the 1984 live-action short that resulted in Tim Burton parting ways with Disney because it was deemed “too scary.”

I could nitpick about things like the size of Victor’s attic (it’s a TARDIS–bigger on the inside than the outside), and other details–but why? It’s a fun, fun film. The subject matter could be a bit intense for young children, though. Overall, this was an entertaining well-done romp, well worth seeing.

And it has style.

I still can’t believe this is a Disney film. 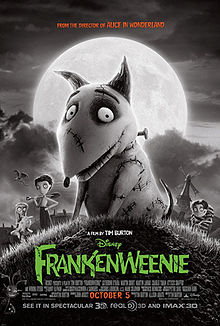 Article Name
Frankenweenie Movie Review
Description
Now Tim Burton has given us a dark comedic take on the tale, done in stop-motion animation, in glorious black and white. It has all the hallmarks of awesome: a stellar cast, a Danny Elfman soundtrack, and Tim Burton’s hallmark quirky characters.
Author
Elektra Hammond
BuzzyMag.com