The Frood: The Authorised and Very Official History of Douglas Adams & The Hitchhiker’s Guide to the Galaxy
Written by: Jem Roberts
Published by: Random House UK
ISBN: 978-1848094376 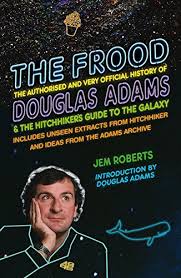 HITCHED TO INTERSTELLAR ROADS, A COLOSSUS.

The Frood appears rather an inauspicious title for a book about Douglas Adams, partly because of the unseemly elevation of ‘ frood ’ to proper noun, partly again because (like brethren descriptors ‘sass’ and ‘hoopy’) the term constitutes a digressive, off-the-cuff piece of garnish even within the fictional world of Hitchhiker’s, but for the most part because it’s quintessentially a Ford Prefectey, not Douglas Adamsey, sort of word-sprig. Adams himself was cast more from the Arthur Dent mould (or increasingly vice versa), and of all the monikers that could be applied to him — universal man; thinker of deep thoughts; bath-taker extraordinaire — frood seems singularly off the mark. Previously, Jem Roberts had chronicled both I’m Sorry I Haven’t a Clue and Blackadder without feeling the need to put (say) ‘Samantha’ or ‘Wibble’ on the front cover. One can only hope he doesn’t now write a book about John Cleese and call it ‘Pining for the Fjords’.

If the title is inauspicious then the first three pages of Roberts’ narrative are positively without prospect, referring to Adams as ‘ our Frood ’ and using inconsistent present tense to lay down a Hitchhiker’s pastiche of debatable eloquence. Thankfully, the style then settles down a bit (as it were) and Roberts begins more matter-of-factly to detail Adams’ life and labours, with specific reference to how Hitchhiker’s coalesced and was refined by its creator throughout a long genesis and progressively difficult evolution. Roberts clearly knows his comedy oeuvres, and although his enthusiasm occasionally results in passage-long sentences that are all-but-indecipherable to readers who aren’t already well-acquainted with the crux, it is this depth and breadth of knowledge (not the glowingly askew faux ebullience of its front cover) that defines Roberts’ book and affords it a legitimacy alongside previous tomes such as M. J. Simpson’s Hitchhiker (2003), Nick Webb’s Wish You Were Here (2003) and Neil Gaiman’s Don’t Panic (1988, last revised 2009).

From Adams’ earliest schoolboy scribblings, through his writer-performer phase at university and wannabe-Python collaborations with Graham Chapman, to the overnight fame of Hitchhiker’s and subsequently, infamously, the myriad of projects with which Adams would distract himself so as to drown out the whistle of oncoming deadlines, Roberts has pieced together the astoundingly creative yet dysfunctional writing processes that brought about Hitchhiker’s in all its manifestations, consummating these insights through virgin access to the newly established Adams archive at St John’s College, Cambridge, and showing how Adams’ endless supply of new thoughts and takes on the world often brought with it the context through which to revive old ideas, and how necessity then could tip Adams beyond the balance point of his equally boundless procrastinations and give rise instead to typewriter- and keyboard-pounding blitzkriegs.

Adding further merit to Roberts’ investigations is that he remains divorced, both chronologically and associatively, from the subject of his history-biography. The resulting work, though ever respectful, is also for the most part not unforthcoming as to Adams’ shortcomings and foibles. The Frood concludes in more upbeat a fashion than was possible a decade earlier, ending not with Adams’ death but rather a catalogue of the many iterations by which Hitchhiker’s has flourished thereafter. At once a celebration and a lament, a valediction of the man and a formalising of the oft-improbable but seemingly-all-true strands of his creator myth, it contains a detailed Adams/Hitchhiker’s chronology and bibliography, sixteen inset pages of glossy photographs (both black and white and colour) and fifty-odd pages of hitherto unseen documents from the Adams archive. Foremost among these are some sizable discards from Life, the Universe and Everything — false starts in Adams’ estimation, at once both greatly removed from the published version and yet so exquisitely Hitchhiker’s in places that they might just as well constitute excerpts from a new, deadline-singed and altogether different book. Priced at less than six pints of lunchtime muscle relaxant, [easyazon_link asin=”1848094388″ locale=”US” new_window=”default” nofollow=”default” tag=”buzmag-20″ add_to_cart=”default” cloaking=”yes” localization=”default” popups=”default”]The Frood[/easyazon_link] may in this respect offer the best mix of Douglas Adams history and nostalgia this side of Islington.

SHOP
The Frood: The Authorised and Very Official History
of Douglas Adams &
The Hitchhiker’s Guide to the Galaxy

The Frood tells the story of Adams' explosive but agonizingly constructed fictional universe, from his initial inspirations to the posthumous sequel(s) and adaptations, bringing together a thousand tales of life as part of the British Comedy movements of the late 1970s and 1980s along the way. With the benefit of hindsight and much time passed, friends and colleagues have been interviewed for a fresh take on the man and his works.