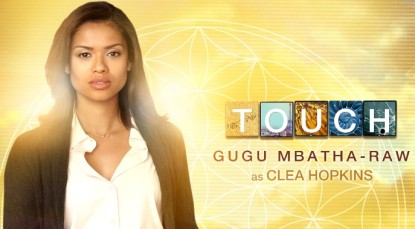 In the normal course of television journalism, one doesn’t usually start an interview by asking about someone’s fundamental beliefs. However, it’s hard to discuss Fox’s new series TOUCH without doing just that.

“When I read the script,” says actress Gugu Mbatha-Raw, “I was so delighted about, because it really sort of correlated with my view of the universe, that idea of everything happens for a reason. I find that incredibly comforting. There are so many bad things that happen in life and the experiences that people go through that are damaging, and you think, ‘Why me?’ But if you can believe that there is something to learn from every experience you go through, then I think that’s a positive way to approach your life.”

Couldn’t the notion that everything is connected create a paralyzing fear of making a seemingly innocuous choice that could have a disastrous domino effect? “No, I guess you can’t be paralyzed by it. Because the thing is, the world is going to turn, the sun is going to rise tomorrow, and everything happens for a reason as it should. So I think it find it more comforting than paralyzing. ”

Created by Tim Kring of HEROES and already renewed for a second season, TOUCH stars Kiefer Sutherland as widower Martin Baum, who discovers that his non-speaking eleven-year-old son Jake (David Mazouz) sees and reacts to patterns that connect seemingly random people and events all over the world.

This unique situation causes Martin and Jake a lot of problems. One of their few allies is Mbatha-Raw’s character social worker Clea Hopkins, played by Mbatha-Raw.

Mbatha-Raw has spent the day talking about TOUCH with the press, and now she’s at a party thrown by Fox for the Television Critics Association. Alone in the throng for a few minutes, she graciously takes time to talk about her new series some more, along with a few other recent gigs.

Despite the flawless U.S. accent Mbatha-Raw employs on TOUCH and for her other American characters, the actress is actually British. She knows her name, especially its pronunciation, is a sort of interest for many people. “Goo-goo Um-BAT-uh-Raw. So the ‘th’ – just imagine it’s just a hard ‘T.’ I was born in the U.K., in Oxford and my dad just named me [full name Gugulethu] because it felt right at the time,” she laughs. “Gugulethu means ‘our pride’ in Zulu.”

By the age of eleven, Mbatha-Raw was acting on stage in Oxfordshire. As an adult, she has appeared in arcs on a number of cult favorite British TV series, including MI-5, BONEKICKERS and as Tish Jones on DOCTOR WHO.

When she came to the U.S., Mbatha-Raw was cast as the female lead opposite Boris Kodjoe in J.J. Abrams’ NBC series UNDERCOVERS, about a married pair of spies. The 2010 comedy only lasted thirteen episodes, but Mbatha-Raw moved on to the feature film LARRY CROWNE, playing a free-spirited student.

Then came TOUCH, which Mbatha-Raw estimates came approximately six months after UNDERCOVERS had ended. “I was actually shooting a movie in New Mexico when I got the script for TOUCH, and I really wasn’t thinking about TV after the UNDERCOVERS experience. As incredible and as short-lived as it was, I really learned a lot from it, and I really wasn’t sure that I was ready to commit to a TV series after kind of being slightly bruised from the short-lived experience of UNDERCOVERS. But when I read this script by Tim Kring, I really just was totally blown away by how emotionally connected I felt to the story. I thought it was sophisticated and layered and challenging, not in a confusing way, just in a way that was really satisfying. So that was really what drew me to it.”

Playing a social worker, Mbatha-Raw adds, was another part of the job’s appeal. “It’s been fascinating to me, because I didn’t know anything about social work before I started, and when I committed to the pilot, I made sure that I met several social workers, both here in L.A. [where TOUCH films] and in New York [where the story takes place], just to find out a little bit more about this very, very challenging job. I have so much respect for social workers, because often, they’re depicted as the bad guys, the people who are going to take the children away from their parents, and that’s just not the case. I’ve learned a lot about the empathy mixed with the sort of detachment that is required to be in that profession.”

TOUCH’s Clea and UNDERCOVERS’ Samantha are both working adults, while Talia in LARRY CROWNE is still in college. Mbatha-Raw enjoys the chance to play characters of varying ages as well as diverse professions. “LARRY CROWNE was a terrific experience for me, and the character was very light and [had] that comedic element – I just love the challenge of being able to kind of inhabit different people, so whatever age it is,- I can hear the voice of the character if it’s well-written. So I love that challenge.”

Working with director/leading man Tom Hanks on LARRY CROWNE, Mbatha-Raw adds, was a pleasure. “He’s such a fun guy. I mean, so warm-hearted and hilarious. I mean, a real entertainer.”

UNDERCOVERS was heavily hyped prior to its 2010 debut, as the romantic spy comedy was produced by J.J. Abrams, creator of ALIAS and director of the two most recent MISSION: IMPOSSIBLE films (to say nothing of his cult hero status for LOST and FRINGE). Mbatha-Raw played Samantha, one-half of a spy couple, with Boris Kodjoe as her husband. The series didn’t last, but Mbatha-Raw has fond memories of it.

“To be honest with you,” the actress says, “it was my first job in the States, and so I had really nothing to compare it to. The whole experience of doing a network show was a relatively whirlwind experience for me, and I’m fantastically grateful to J.J. Abrams and NBC for that great opportunity. And I learned a lot from doing it. But again, like [the theme of] TOUCH, everything happens for a reason and I think it had its life and it was time to move on. I’ve made my peace with that and, as I say, I’m grateful for the experience. No regrets. [Kodjoe] is just such a wonderful actor, so gorgeous, and we just had a really great time with the script. And the action – we got to do so much together, we got to play different characters, our characters playing different spy covers.”

The spy clothing was also nice, Mbatha-Raw recalls. “Laura Goldsmith, the designer, actually worked on ALIAS and has worked with J.J. several times and she’s got phenomenal taste. Because we were always changing identities and traveling the world, there was so much opportunity for different styles and outfits. I would say that Samantha is a little bit more sophisticated and chic in her style – I got to wear some fabulous outfits.”

The social worker outfits aren’t as glamorous, but Mbatha-Raw loves her TOUCH character, getting to work with star/producer Sutherland and the specific intricacies of playing opposite young Mazouz, whose character Jake neither speaks nor makes eye contact. “It’s so well-written, the structure of the scenes,” Mbatha-Raw emphasizes. “Yes, you’re working with someone who is non-verbal, but at the same time, there’s always that hope that he might respond, so it actually makes you work harder as an actor to really try and connect with him, so it’s not as challenging as I think it might appear.”

Viewers who would like to see more of Mbatha-Raw can find her in film theatres later this year, she reveals. “Coming up is the movie that I shot last year, ODD THOMAS, which is based on a Dean Koontz novel. [It] is a very different genre, a supernatural thriller, a total contrast. That’s coming out later this year.”

Given the nature of some supernatural stories, is it appropriate to ask if Mbatha-Raw plays a human person or some other sort of being? Mbatha-Raw laughs. “Oh, yes. I play a person. But I do have some clairvoyant abilities.”

Is there anything else Mbatha-Raw would like to say about TOUCH? “Just watch it,” she advises. “It’s like nothing else.”