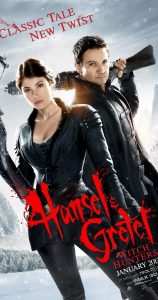 Two Bond girls and an Avenger– Hansel and Gretel: Witch Hunters is an over-the-top action/adventure romp dressed in lots of black leather.

It begins with a simple recap of the fairy tale we all know and love, including a truly delectable candy cottage and a really creepy witch. But that “incident” led to grown-up Gretel (Gemma Arterton) and Hansel (Jeremy Renner) as kick-ass bounty hunters, traveling the countryside, killing witches. Gretel is smart and sassy, and Hansel is quieter, content to be her wingman. They are a solid team.

The true joy of this movie is that it never takes itself too seriously, instead staying light-hearted and amusing, resulting in a goofy, adventure with steampunky touches.

The main plot thread concerns a town where a bunch of children have gone missing (look for their pictures on milk bottles!)–witches are naturally suspected. The mayor hires Gretel and Hansel to investigate. In a similar vein to Hugh Jackman’s Van Helsing, many of the townpeople are slow to trust the brother and sister team. Some folks cooperate, others hinder the investigation. A secondary plot concerns what happened to Hansel and Gretel’s parents all those years ago when their father left them in the woods–as it turns out, the two cases are intertwined.


Hansel and Gretel fight together well as a team, and that teamwork enables them to win out against magic, which would have beaten them one-on-one. Like Batman, they have no super-powers, but they have some great equipment. They each have “signature” favorite weapons (think Jayne Cobb’s Vera from Firefly) with a very steampunk one-of-a-kind look–I want them! Both of the team gear up with protective leather (including long pants and long sleeves and boots!)–Gretel isn’t showing unnecessary skin. That won me over from the start.

The level of fun made this surprisingly watchable. Hansel and Gretel even have groupies (look for the scrapbook–it’s priceless). The witches are scary, and their makeup effects are well-done. And flying broomsticks (hooray for stereotypical witches on broomsticks). Do take note: there’s lots of violence and gore in this one (it earned its R rating and then some).

Things that could have been better: the movie was predictable at times, but not so much so that it ruined the enjoyment. I was a touch bothered by the pairing of evil witches with devil worship–at least the movie didn’t pretend to be alternate history.

Gemma Arterton (Strawberry Fields in Quantum of Solace) as Gretel was particularly strong, and Jeremy Renner (Hawkeye) was perfect as her supportive brother (and the brawn to her brains), Hansel. Famke Janssen (Xenia Onatopp in Goldeneye) is nothing short of amazing playing a powerful witch.

So, give yourself permission to have fun, leave your brain at the door, and go see Hansel and Gretel: Witch Hunters. Bring a friend. It’s a fine way to spend an evening. 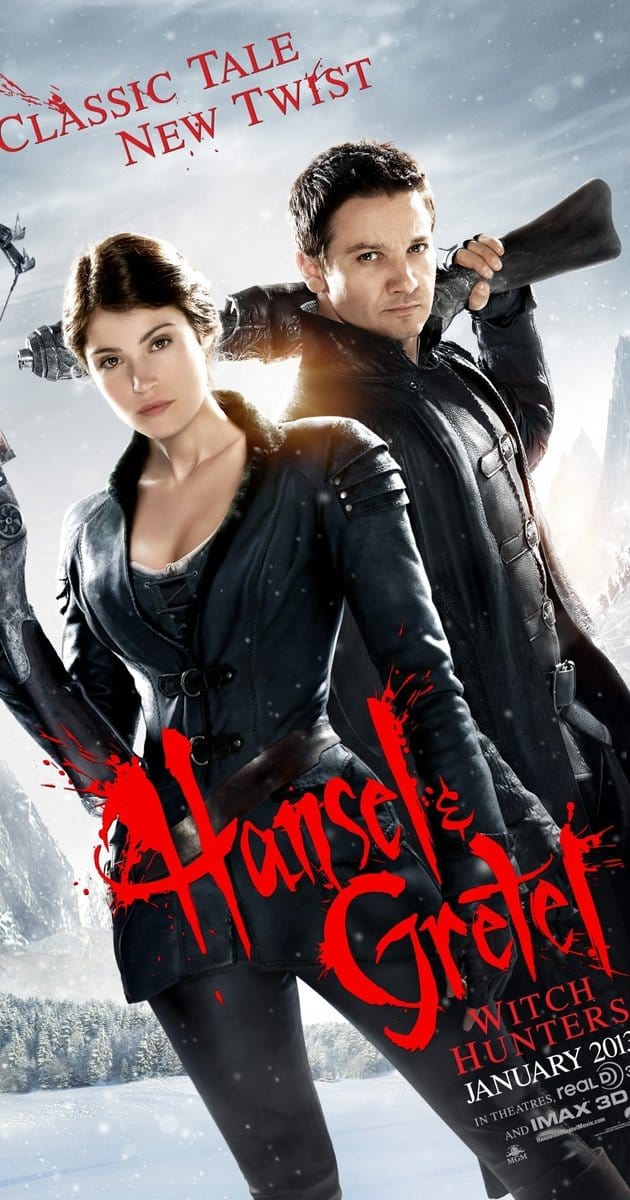