With both of his parents mysteriously vanishing by way of Ocean consumption, Harrison must use his supernatural sensitivity to search for answers, while also dodging the creepy cult that runs his beach town. 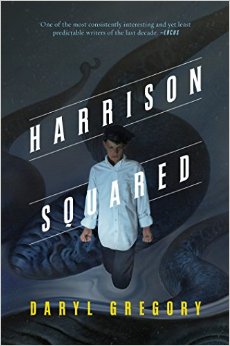 Daryl Gregory is an award-winning author and apparently I’m late to the party. I was lucky enough to receive an advance reader’s copy of his forthcoming novel, [easyazon_link asin=”0765376954″ locale=”US” new_window=”default” nofollow=”default” tag=”buzmag-20″ add_to_cart=”default” cloaking=”default” localization=”default” popups=”default”]Harrison Squared[/easyazon_link], and now I have to go back and read the rest of his stuff, because Harrison Squared was a titillating genre-bending story told with real skill.

The protagonist, Harrison Harrison (get it?), is a slightly odd high-schooler whose mom is a marine biologist. When Harrison was just a wee lad, some monstrous squishy thing from the depths capsized the family boat and made off with his father. Probably. His dad disappeared, at any rate. His mom continued to study the ocean and its various critters and now they’ve ended up in the seaside town of Dunnsmouth for her newest project. Dunnsmouth is jammed to the salty gills with pure Cthulhu aberrance which Harrison finds just about one hundred percent creepy as hell. Everyone in his school seems to be in a Lovecraftian cult and they’re not being very secretive about it, either. They sing hymns every morning before class and Harrison is relegated to the fringe because he’s not chanting love poems to the lords of darkness.

The rest of the town isn’t any better. Everyone from the teachers to the sheriff seems to be part of the cult and bizarre nighttime activities are the norm. When his mom vanishes during a research jaunt on the treacherous sea, Harrison finds things getting stranger still. Despite most of the townsfolk writing her off as fish food, Harrison decides the game is afoot and goes all Sherlock Holmes to unravel the mystery. In no time he’s dodging a macabre scrimshaw artist/serial killer, making friends with an amphibious humanoid teenager, and trying to foment resistance to the Lovecraft cult that seems complicit in his mom’s disappearance.

This book isn’t exactly fantasy and it isn’t exactly horror, but it’s got some great elements from both. By far the coolest thing about it is the nonchalance with which Gregory introduces sheer weirdness. Harrison isn’t really normal; he’s sensitive to supernatural activity and he’s seen some freaky shit. However, he keeps finding himself in situations where the freakmeter swings deep into the red. It doesn’t matter if he’s stumbling across monsters, trading manga with a fish-guy, or shadowing a guy that carves up whalebone for art and people for fun. Gregory tosses horrifying stuff into the mix as if he’s just adding raisins to granola, like it’s the most typical thing in the world. He has Harrison bumping into tentacles the way other authors would have a character run into an ex-girlfriend. Just all casual, like “Hey, girl, what’s up.”

And that’s how Harrison handles it, too. If he stepped out of the house and didn’t encounter some dripping wet nightmare, he might be stressed. But one nightmare right after another? Aw, hell, that’s par for this course.

Harrison Squared isn’t an overwhelming masterpiece but it’s tons of fun. The mystery Harrison is investigating isn’t full of shocking revelations that’ll wrap your stomach around your heart. But it’s tightly paced and swarming with bits of creepy info delivered at just the right time to keep interest high. There’s very little fluff, nothing much to distract from the crux of the plot. From page one, this is a book that’s geared to get stuff done.

Gregory knows what he’s doing. He writes teenagers well without trying to be all hip and bust out perfect slang. He also writes…cool. There’s almost no other way to describe it. This book is just cool. Please check it out on March 24th.

When his mother disappears at sea, a teenage boy, who is attuned to the supernatural world, attempts, along with an unusual group of allies, to solve the mystery of her accident.