Book review of the 2nd installment in the Shadowside series 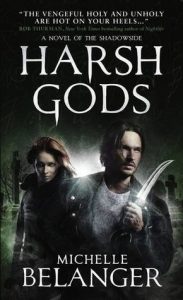 In this follow-up to Conspiracy of Angels

, Zachary Westland answers a call to an exorcism by a priest who seems to know him well. Zack feels compelled to help but his memory is in tatters, and he doesn’t remember Father Frank at all. The subject of the exorcism, a young girl named Halley, speaks of the Whisper Man and scrawls words in a language that Zack should know but can’t recall. When the rite is interrupted by violent, otherworldly forces, they realize this is no simple case of psychological trauma or demon possession. The force they are up against is old, angry, and it holds a grudge against Zack and his Anakim tribe. In order to save Halley from this ancient evil, Zack risks losing his immortality or rekindling a war that ended when human civilization was still young.

Harsh Gods is hard to put down. The action, mystery, and pacing are thrilling, and several scenes are heartbreaking. The situation Zack, Lil and Father Frank deal with in the present is an echo of a war fought many millennia ago. Immortal beings are patient; they know how to nurse a grudge, and the reemergence of two powerful artifacts may be a renewed call to arms. Their machinations are a stark reminder that the moral code of beings whose memories span thousands of years are not those of modern humans. 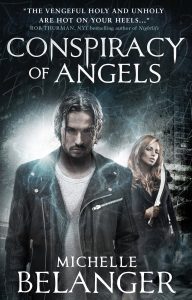 The intricate world building blends into the storytelling instead of overpowering it. The angelic tribes and their history drive the plot. The vampiric Nephilim are a strong presence in the city and were the catalyst for events in Conspiracy of Angels. More tribes are introduced, including the Gibburim and Rephaim. The daughters of Lilith are also immortals but as to what they are, Zack warns: “I wouldn’t dig if I were you.” Of course, alongside the immortals are humans who work with them and help them stay hidden. Some are bound by friendship and some by magic or blood.

The world of the Shadowside series hovers over the rust belt city of Cleveland, Ohio like a magical cowl. This historic city adds a layer of realism to key events set in iconic landmarks anyone can visit. Harsh Gods doesn’t shy away from demonic possession, blood, or brutal murders, but it isn’t all doom and gloom. Zack relates his story in his voice, letting his cynical attitude and geeky-professor personality lighten the mood. Father Frank Mazetti, an ex-marine turned Catholic priest brings his patience and loyalty to the fore. Lil Gibson, the Lady of Beasts, is ever-present, adding her ferocious nature and allure to the mix.

Belanger has a keen sense of mystery, allowing readers to unravel clues and solutions as the story unfolds. This, along with the urgency of saving a child in danger and rising supernatural tension kept me hooked. Though this is the second book in the series, it can be read as a standalone novel, but you’ll get a richer experience reading both. I recommend the Shadowside series for fans of paranormal urban fantasy, horror, and dramatic thrillers.

The last thing Zack Westland expects on a frigid night is to be summoned to an exorcism. Demonic possession, however, proves the least of his problems. Father Frank, a veteran turned priest, knows Zack’s deepest secrets, recognizing him as Anakim, an angel belonging to that hidden tribe. And Halley, the girl they’ve come to save, carries a secret that could unlock a centuries-old evil. She chants an eerie rhyme, and she isn’t alone… "HANDS TO TAKE AND EYES TO SEE, A MOUTH TO SPEAK. HE COMES FOR ME." As Zack's secrets spill out, far more than his life is at stake, for Halley is linked to an ancient conspiracy. Yet Zack can't help her unless he's willing to risk losing his immortality—and reigniting the Blood Wars. “A darkly vivid world… Her characters are intriguing, her pacing swift. More, please!”—Jim Butcher, creator of The Dresden Files Praise for Conspiracy of Angels: “Horrors that will send a chill up your spine.”—The Absolute “A singular reading experience.”—Laurell K. Hamilton, bestselling creator of Anita Blake, vampire hunter

S. Kay Nash is a reader, writer, and reviewer of speculative fiction. A copy editor by day, she lives in Texas with her spouse and a peaceful contingent of cats and dogs.