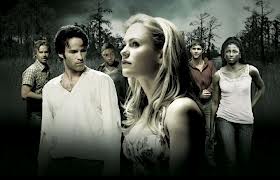 Music may not be the most important element in a film or television program but it should prepare you for what is going to be taking place onscreen. “Bad Things”, the theme music on True Blood, HBO’s “reimagining” of the wondrous world of Charlaine Harris’s Southern Vampire Series, does an outstanding job of setting both mood and place. The musician responsible is Jace Everett and I’m beginning to think he is the best thing to come out of Texas in a long while.

So many good and even great books are gutted body and soul once they hit the screen but Alan Ball is treating the source material with respect. Could it be because the producers are fans of the books? Even if they aren’t well they sure do have a feel for Bon Temps, southern country society, and the characters that make the stories work. As a fan of the book series myself I am awaiting with baited breath the infusion of humor that Charlaine Harris has always managed to weave into her work. That is something that people like Joss Whedon ( Buffy the Vampire Slayer, Angel, Firefly, Dr. Horrible’s Sing-Along Blog) understood is necessary when blending fantastic fiction with realistic settings. It is how you can handle serious subjects without sounding like your High School health class teacher. If I were a betting person I would wager that if and when they bring Bubba to the show some of that uncomfortable “There’s Something About Mary”, “Meet The Parents” humor will start to take hold. For those of you who have not read the Southern Vampire series and therefore have no idea who Bubba is well I won’t ruin your fun by telling you here and now. I guess there was a stab at humor in the episode where downing a vial of “V” gives Jason a powerful lesson in overdosing on potency. Not that he learns his lesson of course but that is the whole point of it. People don’t automatically change behavior even when they have just been on the receiving end of a painful and humiliating self-inflicted experience.

The cast of True Blood is superb. Anna Paquin plays Sookie as sweet and sassy. There is the challenge of communicating Sookie Stackhouse’s blessing and curse of telepathy I can’t think of anyone who could bring this off better than Anna Paquin. Of course I can’t think of anyone who managed to get an Oscar for acting at the tender age of 8 either. Anna is able to make you feel Sookie’s isolation and the need for intimacy as well as the hurt of being different in a small southern town. Sookie also has a stubborn streak and a firm grasp on what is fundamentally right and wrong. So far all the nuances of the character seem to be nailed by Ms.Paquin. Oh, and I suppose I should mention that she is really, really pretty.

Stephen Moyer does a convincing job as Bill Compton. It would be so easy to go over the top when after all the character is very serious and very intense. He plays it with restraint but there is no doubt in the mind of the audience that Bill is a very old, very powerful vampire who also has a painful past and notions of chivalrous and courteous behavior that goes back a couple of centuries. Sex appeal simply flows out of him like jazz Bourbon Street during Mardis Gras. He might come close to doing for a Confederate American vampire as an Englishman what James Marsters did for Spike, a British vampire, as an American.

Sam Trammell makes for a very appealing Sam Merlotte although for some reason I pictured the character as physically larger than the actor who now plays him. Physical size really doesn’t matter in this case and Sam’s conflicted character as well as his protective streak is telegraphed to the audience without the need to give a lot of exposition simply because of his acting ability.

There are some things in the show that as a fan of the books series I find uncomfortable. Not to the point of distraction. As an audio book publisher I can appreciate the changes that occur when a story is told in different mediums. This can be a very bad thing or a very good thing. It all depends how the material lends itself to the different medium and the quality that goes into telling the tales. In any case there will always be variations.

The speeding up of sexual matters and adding sexual relationships that never existed in the books I’ll assign to the series being on HBO. Pretty much most series that are on HBO have more than their share of sex. OK so maybe not John Adams but almost everything else. When we meet Sookie in the books she may look like a hottie but her upbringing and her telepathic ability have made her shy away from intimacy with men. Bill Compton and Sookie may have sparks flying but not at first and he is extremely protective as well as territorial. The idea that Bill could sit in a dark corner while 3 vampires fondle and intimidate Sookie while in his house is well…unbelievable. Still I will forgive and forget as long as the series seems to keep improving.

Even if you aren’t the type that seeks out supernatural fiction I suggest you give this series a try. Like The Dresden Files, the stories may use things like telepathy, vampires, werewolves, wizards, ghosts, demons and all manner of spooky stuff but at heart it is about people and finding our way in this dangerous world while coming to an understanding of life and death.