Heroes and Monsters: The Unofficial Companion to The League of Extraordinary Gentlemenn

Pulp fiction has been a constant in comics since forever. The dashing heroes, the improbable plots, and far out locales associated with pulp is what made comics a hit among boys and girls of all stripes. It’s also the same reasons why academics hate the genre. Unless it’s a graphic novel about cancer or a suburban devotee “finding herself”, it’s a sure bet that a story about crime fighters in tights won’t make it on a college syllabus.

Which is why The League of Extraordinary Gentlemen is so, well, extraordinary. Since its debut well over a decade ago, the steam punk series, featuring Alan Quatermain and Mina Harker has won devotees both inside and outside academia with its sharp wit and literary references. But none have plumbed its depths, or panels, quite as obsessively-or keenly-as Jess Nevins.

I know this because I’ve read his postings. Between 1997 and 2000,Nevins, under a variety of handles, published a series of what can best be described as annotations on League in a variety of newsgroups, especially a board devoted to a certain Sci-Fi show known as Mystery Science Theater 3000. (Full disclosure: I was one of those fans. I wrote bad fan fiction, horrible, unfunny fan fiction).

Now well over a decade (and a newsgroup) later, Jess has published those musings in a book entitled simply enough, Heroes & Monsters: The Unofficial Companion to the League of Extraordinary Gentlemen

“. As unofficial companions go, it is fairly straightforward, featuring a trove of obscure references that any MiSTie, or Legionnaire would appreciate.

Where Heroes and Monsters stands out is the wealth of information on Nineteenth Century literature. Not surprisingly, since League is set at the dawn of the last century. Cthulu figures prominently here, as does the works of Jules Verne, the Call of Cthulu series, H.G. Wells and so on. A huge chunk of time is devoted to Verne’s Captain Nemo, who figures prominently in League. 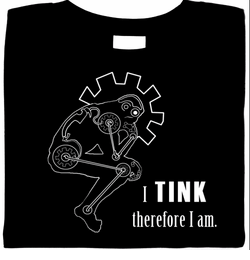 Shop
I Tink Therefore I am

Fans of useless trivia will enjoy tidbits like: who knew H. Rider Haggard was a veteran of the scramble for Africa? Or that potential spies were not recruited off Ivy League campuses till at least Kim Philby’s time? The title might as well be “Not Afraid to Be Servicey: The Stuff You Didn’t Know (Until You Picked Up This Book)”.

Despite the analytic nature of Heroes and Monsters, Nevins unearths a surprising link between the pulp fiction of the Nineteenth Century and the fan fiction of today. Celebrity appearances were nothing new-Theodore Roosevelt appeared in several stories in his own life time-and crossovers were popular as well. There were more appearances by Sherlock Holmes in several stories to warrant several Law and Order spinoffs.

But I’m getting ahead of myself.

Heroes and Monsters is a must for any fan of Mina Harker, Dracula, or any pulp that gets your thrills up at night.

SHOP Heroes & Monsters:
The Unofficial Companion to the
League of Extraordinary Gentlemen