Over the course of many years, I’ve read thousands of manuscripts. There’s a curious symmetry writers have in their first few books. Either they wake up, they dream, they look in a freaking mirror and describe their luxurious, wavy hair, or they tell us everything that happened in their life up to this point.

For some reason, newer writers think that we, the reader, must know what the main character looks like in the first few paragraphs. Immediately, they give us a driver’s license version; height, weight, hair and eye color. I don’t know about you guys, but I seriously don’t like someone in love with their own hair. Writers, this isn’t bad information to have. You need to know if your character has white hair that shines in the moonlight and will give away his position to the enemy. We don’t, at least not until the bullet parts his curly locks.

What we need to know in the first few paragraphs are the same things that your teachers insisted you have in science papers and book reports, the four W’s: Who-Where-When-Why. The entire book is the How but it doesn’t hurt to give a hint of that at the beginning either. 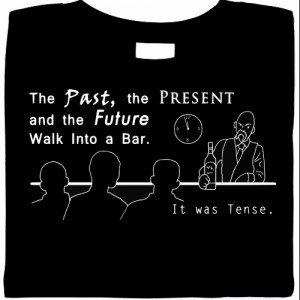 SHOP – The Past Present & Future Walk Into A Bar .. It Was Tense Shirt

Where is a kind of important thing, guys. There’s a big difference between New York City and The Shire. I know writers who agonize over their first sentence like their entire chance of publication hangs on half-a-dozen words. Umm…no. It doesn’t. You have to make sure your reader knows where they are, and when they are. When you go to the bookstore or the library, and are browsing the shelves, you read the cover copy, and then flip to the first page, and read a few paragraphs, right? Then and only then do you decide to read the entire book.

So the first few pages are what are important—especially to a debut author.

I grabbed a few books off of my own shelf to pull out examples. We’re checking for the four W’s at the beginning of each book. We’ll keep the examples to under 300 words, so about a page.

I heard the mailman approach my office door, half an hour earlier than usual. He didn’t sound right. His footsteps fell more heavily, jauntily, and he whistled. A new guy. He whistled his way to my office door, then fell silent for a moment. Then he laughed.

I winced. My mail comes through the mail slot unless it’s registered. I get a really limited selection of registered mail, and it’s never good news. I got up out of my office chair and opened the door.

The new mailman looked like a basketball with arms and legs and a sunburned, balding head, and he stood chuckling and reading the sign on the door glass. He glanced at me and hooked a thumb towards the office glass. “You’re kidding, right?”

I read the sign (people change it occasionally), and shook my head. “No, I’m serious. Can I have my mail, please.”

“So, uh. Like parties, shows, stuff like that?” He looked past me, as though he expected to see a white tiger, or possibly some skimpily clad assistants prancing around my one-room office.

I sighed, not in the mood to get mocked again, and reached for the mail he held in his hand. “No, not like that. I don’t do parties.”

He held on to it, his head tilted curiously. “So what? Some kinda fortuneteller? Cards and crystal balls and things?”

Okey-dokey. We know Who: Harry Dresden, Wizard. We have an idea of Where: In his office. We know When: Daytime (because the postman comes during the day, right?) We know Why: because he’s at work, he is a professional wizard, it’s his job. And we even have a hint of How. He does the job but no one believes in him. He’s mocked by a perfect stranger. We have the four W’s.

I’d been waiting for the vampire for years when he walked into the bar.

Ever since vampires came out of the coffin (as they laughingly put it) four years ago, I’d hoped one would come to Bon Temps. We had all the other minorities in our little town-why not the newest, the legally recognized undead? But rural northern Louisiana wasn’t too tempting to vampires, apparently; on the other hand, New Orleans was a real center for them-the whole Anne Rice thing, right?

It’s not that long a drive from Bon Temps to New Orleans, and everyone who came into the bar said that if you threw a rock on a street corner you’d hit one. Though you better not.

But I was waiting for my own vampire.

You can tell I don’t get out much. And it’s not because I’m not pretty. I am. I’m blond and blue-eyed and twenty-five, and my legs are strong and my bosom is substantial, and I have a waspy waistline. I look good in the warm-weather waitress outfit Sam picked for us: black shorts, white T, white socks, black Nikes.

But I have a disability. That’s how I try to think of it.

Who is obvious because, once again, we’re in first person. We also know that she is a waitress in a bar. What she wants is to meet a vampire. Where is established, Bon Temps, Louisiana, in a bar, at night, four years after vampires came out of the coffin. Why she wants this is because she doesn’t get out much and everyone thinks she’s crazy. There’s even a hint at How (danger) when she points out that you shouldn’t throw a rock at a vampire.

Both authors covered the four W’s with less than 300 words. Both grabbed our attention from the get-go. Both are New York Times and USA Today best sellers. Both have television series based on their books. They didn’t start in the middle of a fight, or by waking up. They didn’t dream or look in the mirror.

Now writers go back over your manuscript and check for Who-Where-When-Why-How. Then break the mirrors for good luck.

Article Name
How To Hook Your Readers In The First Page Of Your Book
Description
What we need to know in the first few paragraphs are the same things that your teachers insisted you have in science papers and book reports, the four W’s: Who-Where-When-Why. The entire book is the How but it doesn’t hurt to give a hint of that at the beginning either.
Author
Julie Butcher-Fedynich
BuzzyMag.com