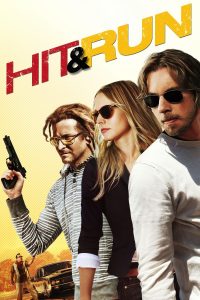 Hit and Run is a goofy (stupid) romantic comedy overlaid on a long chase scene. The characters are for the most part one-dimensional, and the plot doesn’t stand up under much scrutiny.

The two main characters are Charlie Bronson (Dax Shepard), a former bank robber now living in obscurity in witness protection, and his girlfriend Annie (Kristen Bell), a college professor. Cute though Annie is, they don’t actually give her a lot of background, other than an ex-boyfriend and her field of expertise at the college.

Bradley Cooper is the major bad guy in the film, Alex Dimitri. His first appearance is simply to show how much of a sociopathic he is, underneath his zen-like exterior (think Patrick Swayze in Point Break). Tom Arnold is the comic relief, playing a U.S. Marshall who is just a bit too bumbling–it became unfunny after a while. Michael Rosenbaum is Annie’s ex-boyfriend who just can’t let go, even though she’s moved on. And Kristin Chenowith is Annie’s boss at the college, fiercely controlling, who Annie is terrified of crossing. All of the characters are totally defined by these limitations.

This movie is at its best when real-life couple Dax Shepard and Kristen Bell are simply bantering back and forth–they can be adorable on screen. But the conflicts introduced to make the movie happen, and the background given the characters they are playing, make their onscreen relationship issues (and the shortened period things play out in) tough to believe. The ups-and-downs as revelations occur seem forced.

The rest of the cast were also clearly having fun with what they were given, but many of the jokes fell flat for me. The script just doesn’t seem to be well thought out–the entire process from inception to writing to shooting to wrap on this one has been quoted as twelve weeks. It might have benefitted from a little more time. Shepard is writer-co-director-actor-stuntman on this one–maybe it just suffered from a lack of perspective.

High point: Beau Bridges absolutely shines in a cameo as Charlie’s kick-ass dad. More of him would have been welcome.

Overall, this one looked like fun, but never quite got there. YMMV. Shepard’s vintage cars (and his dune buggy) are pretty cool though.

Note: there is an incredibly offensive sequence (intended to be funny) about being raped in jail–if trying to minimize the results of sexual assault for laughs will bother you, avoid this one altogether. It’s not worth it. 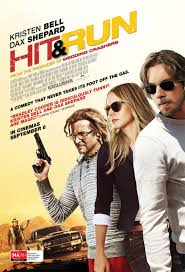 Article Name
Hit and Run - Movie Review
Description
Hit and Run is a goofy (stupid) romantic comedy overlaid on a long chase scene. The characters are for the most part one-dimensional, and the plot doesn’t stand up under much scrutiny.
Author
Elektra Hammond
BuzzyMag.com