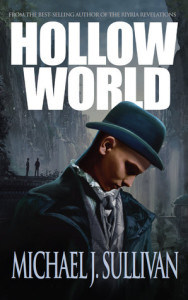 Science fiction is an amazing thing at its heart. Not only does it squint into the future and try to imagine what will happen, but it also looks at what we hope and fear will come to pass. Of late the genre has been very dark, speaking more to our fears than our hopes, so it was great to see a (mostly) hopeful vision of the future in Hollow World.

Hollow World is the story of Ellis, a man in his late fifties who learns he has less than a year to live. A family tragedy has already all but destroyed his marriage, and Ellis is a man looking at short miserable future… except he’s gone and built a time machine in his garage. While Michael Sullivan makes it clear in the forward that his vision of time travel is made out of lies, it fits the story well and isn’t so implausible that it hurts the suspension of disbelief. When Ellis cranks up his machine it reads like the Mythbusters built the TARDIS out of milk crates and hope.

His machine works. It works so well that instead of sending him a few hundred years into the future Ellis arrives several thousand years after the moment he left. He finds himself on an earth that has changed so utterly that it’s almost an alien planet. Yet this is a hopeful vision of mankind’s future, despite the fact that the core of the story involves violence and death, it’s the core of the story because those things have become so rare in our distant future. Ellis teams up with Pax, an arbitrator of disputes who lives inside the hollow earth with the rest of mankind.

It’s a strange world, but it shows a version of the future where humanity has overcome much of its own weakness. Genetic engineering, art, religion, love and technology all get a look in as Ellis not only tries to solve the central mystery but also tries to find a place for an old style human in a very new world.

Fans of Sullivan’s other major work The Ririya Revelations fantasy series will be disappointed if they go in expecting a sci-fi version of that story; Hollow World is very much its own thing. This isn’t a problem, but it is different and that’s something potential readers should be aware of.

The story does drag in places, and there are moments where it feels like the novel is something of a soapbox for Sullivan. With that said the dialogue is sharp and the world building is some of the best I’ve seen in a long time. The Hollow World feels like a real place, with the world existing as a living breathing think that’s affected by but independent to the main characters. There is a lot of detail given about the world but for the most part it’s delivered as a part of the narrative and fits in with Ellis making sense of his surroundings.

Sullivan has hinted that there will be more stories with Ellis and Pax in them, but it’s hard to see where he would take them as Hollow World seems like a very complete tale. This isn’t hard science fiction by any stretch, instead it’s a fun, readable and hopeful look into the future that still has enough mayhem in it too keep the pages turning. 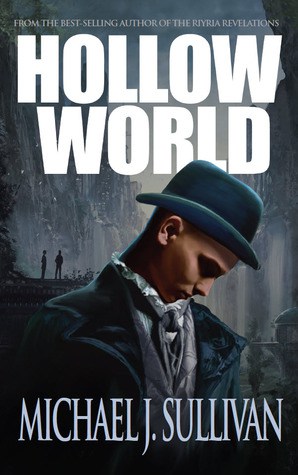 THE FUTURE IS COMING...FOR SOME SOONER THAN OTHERS
Ellis Rogers is an ordinary man who is about to embark on an extraordinary journey. All his life he has played it safe and done the right thing, but faced with a terminal illness he's willing to take an insane gamble. He's built a time machine in his garage, and if it works, he'll face a world that challenges his understanding of what it means to be human, what it takes to love, and the cost of paradise. Ellis could find more than a cure for his illness; he might find what everyone has been searching for since time began...but only if he can survive Hollow World.