The Horror of it All: One Moviegoer’s Love Affair with Masked Maniacs, Frightened Virgins, and the Living Dead… 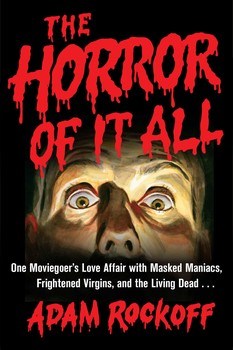 Horror of it All

Horror fans might already be familiar with Adam Rockoff. He’s the eerily erudite author of [easyazon_link asin=”0786469323″ locale=”US” new_window=”default” nofollow=”default” tag=”buzmag-20″ add_to_cart=”default” cloaking=”default” localization=”default” popups=”default”]Going to Pieces: The Rise and Fall of the Slasher Film, 1978-1986[/easyazon_link]. He also adapted the 2010 remake of the controversial classic I Spit On Your Grave, and wrote the screenplay for Wicked Lake, which is seriously so awful most people won’t even talk about it. That notwithstanding, the man knows horror movies like the Colonel knows chicken. His forthcoming book [easyazon_link asin=”1476761833″ locale=”US” new_window=”default” nofollow=”default” tag=”buzmag-20″ add_to_cart=”default” cloaking=”default” localization=”default” popups=”default”]The Horror of It All: One Moviegoer’s Love Affair with Masked Maniacs, Frightened Virgins, and the Living Dead…[/easyazon_link], gave me shivers just from the subtitle. I wanted to be inside this book.

Once I got there, I wasn’t disappointed. This isn’t a boring, clinical look at horror films. Rockoff doesn’t have the chronically dry eye of the academic, gazing through dust at disputed details and themes. Instead, he wades right in with the feverish glee (and approximate writing skills) of a high school senior blasting out a paper whose topic the teacher okayed against better judgment. Rather than some flat dissertation, this is a study of scary movies through the filter of Rockoff’s own life, a macabre memoir that makes up in gusto what it lacks in epistolary talent.

Rockoff’s genuine love for the genre shouts from every page. But it’s not blind love, irrational and swoony. He doesn’t just accept the tried and true while rejecting what’s always been sneered at. Rockoff’s affection is deep and sublime but it’s coupled with a bucket of smarts. He can think for himself and he makes convincing arguments that might bring you over into his camp.

In a chapter dedicated to slaying horror films’ sacred cows, Rockoff rakes his fingernails against the grain. He makes the claim that the original Friday the 13th movie is at least as good as, if not better than, the original Halloween. This isn’t horror blasphemy but it’s certainly cursing in church. Halloween is lauded by both critics and people who don’t habitually watch creepy stuff. Friday the 13th is generally loved only by hardcore fans and dismissed by the mainstream. Rockoff also asserts that not only is Alien not brilliant, it’s actually boring. Ridley Scott will have him killed for that. And he mentions that The Exorcist isn’t the scariest movie ever made. Or even very scary at all. And also that it’s unintentionally funny at times.

Rockoff takes Siskel and Ebert apart for their role in demonizing slasher films. He cogently argues that they didn’t know what the hell they were talking about and, by the end, I believed him. He devotes a chapter to the confluence of heavy metal and horror and how censorship affected them both. By the conclusion of that one I was blasting Twisted Sister and trying to eat this book I loved it so much. He even delves into postmodern horror films, what they’ve done in the first fifteen years of the new millennium, what’s changed, what hasn’t.

It doesn’t matter that Rockoff isn’t a wizard with words. This thing isn’t written for English majors. It’s irrelevant that he doesn’t crank out many interesting phrases because when he does, it’s fantastic. It’s beside the point that so many of his attempts at humor are trite and lame, because when he manages to be funny, he’s hilarious. This book is for people who outright, wholeheartedly, unabashedly, freaking love horror movies. It’s an intelligent and heartfelt look at something that too often seems dumb and heartless. Scary movies are art, whether they’re seriously great or seriously terrible. Rockoff sees this and he’ll make you see it, too.

A horror film aficionado and screenwriter reflects on a life spent watching blockbuster slasher films, cult classics and everything in between, tracing the highs and lows of the horror genre as reflected by his own fandom. By the author of Going to Pieces.