House at the End of the Street – Movie Review 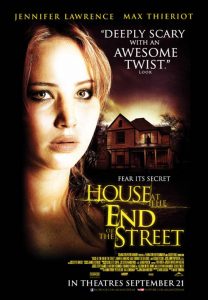 They’ve been a number of horror films out in the last couple of weeks, and House at the End of the Street is the best of the bunch. It’s got at least some originality to the plot, and it’s genuinely scary.

This movie starts with some really creepy music, running behind the standard “things that happened in the past” montage. Note: there are some truly disturbing images here–this one is not for the faint of heart.

Jump to four years later, and we’re following the story of new-to-the-neighborhood high school-student Elissa (Jennifer Lawrence) and her mom Sarah (Elisabeth Shue), who are thrilled with their new rental house, only affordable due to its proximity to “Mr. and Mrs. Dead-People’s-House”–the still-empty scene of the crime. Except it’s not quite empty–hot, college-going son Ryan, away from home during the crime, is fixing up the house with hopes of selling it. Elissa and Ryan instantly hit it off. Sarah, predictably, objects.

I particularly liked that police officer Bill Weaver (Gil Bellows) was often the voice of reason–he did things you would expect a good cop to do, and acted calmly, rationally, and logically. When called on to handle an assault, he insists that he will question all involved, as well as all the witnesses, then use all possible information to determine what actually happened. Too often there is no one who uses sense in a horror film, and police officers often get short shrift.

The best part: I was sure I knew where this film was going, and I was absolutely wrong. And then, I was wrong again. It’s got twists and turns, and it is definitely not a run-of-the-mill script.

Elissa is written as a smart teenager, but she makes her share of mistakes. Sarah is a mother who is trying hard, but still has a ways to go–she is complex, and as a result, very believable.

Elisabeth Shue is great as the unsympathetic Sarah–annoying, overprotective, and just not paying attention to the right details. Max Thieriot plays Ryan as alone and confused, a boy shattered by the loss of the family he loved. Doesn’t it feel like Jennifer Lawrence is everywhere this year? It’s probably due to all the press for The Hunger Games. She really delivers here. She imbues Elissa with the innocence only a teenage has–once Ryan wins her trust, she is fiercely protective of him, defending him against her mother and the local kids.

Things that bothered me about the film (that really took me out of the film while watching it): the constant harping on how the crime four years ago dropped property values in the entire neighborhood–and the resultant animosity leveled at Ryan because of it; and confusion between mental retardation and brain damage–the movie used them interchangeably.

The above inconsistencies were annoying, but once this film got moving, it was like watching a speeding train. It accelerated mightily, and held your interest. I was jumping at every little noise by the end.

SHOP
House at the End of the Street 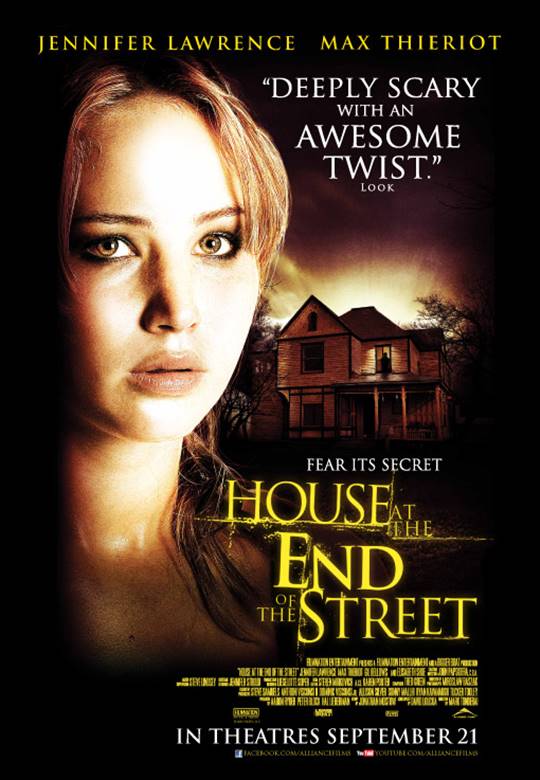 Article Name
House at the End of the Street - Movie Review
Description
This movie starts with some really creepy music, running behind the standard “things that happened in the past” montage. Note: there are some truly disturbing images here–this one is not for the faint of heart.
Author
Elektra Hammond
BuzzyMag.com