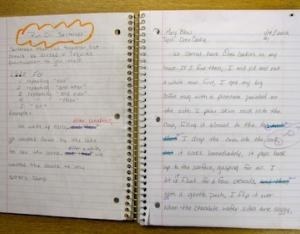 When I was growing up we never knew exactly what time it was. At regular intervals, when my mother wasn’t home, my father moved the clock hands. We knew the clocks were set farther ahead than average, but the difference between real time and the clocks at the Butcher house could be anywhere from five to twenty minutes off—because my mother always ran late.

Mom never intended to arrive at her destination an hour after the party started. There was no malice involved. And yet, we were the ones tip-toing into the back row at church, and the only kids without Kentucky Fried Chicken at the family reunion.

Your Mother was not trying to make you crazy.

Now that I’m a mom myself, I realize that there are eight-thousand things to do before you walk out the door with your family. Time speeds by so quickly that I’ll blink and the day is over. When I was a child, those agonizing minutes of waiting were only a flurry of last-minute chores to my mother.

Publishing is not trying to make you crazy.

As much as I’d like to deny the fact, as a writer, I’m in the same helpless position I was as a child. Honestly, I have no idea what jobs are being done and why I must wait, and wait, and wait. I want to be there yesterday before they run out of Kentucky Fried Chicken. It is extremely hard to make my grown brain rationalize like an adult. However, I do realize that agents and editors and publishing in general is not my mother.

Your mother was not trying to make you miserable.

When she made you write spelling words, or rewrite your book report because of the scratched-out parts (and you really wanted to watch cartoons) your mother was doing her best to make you a success. She wanted the world to love her darling as much as she did. And let’s face facts. If she’d wanted you miserable, you would have been crying in your room, the victim of a mom-stare. She could do that and you know this as a fact.

Publishing is not trying to make you miserable.

When you have the attention of an agent or an editor, and they want sweeping revisions of your work, or want to trash the whole kit and caboodle, they haven’t sat and plotted ways to make you cry. There are no editor meetings where they pick names from a hat to choose their next victim. Moaning about revisions won’t make them go away. (As a matter of fact, it makes people—who would kill to be in your shoe—as mad as heck.) Until you sell as many copies of a book as God has, suck it up, and work those revisions like you copied the spelling words. Like your mother, publishing people have a vested interest in your success. Unlike your mother, their font of forgiveness isn’t endless.

There were times I’m sure that my mom wanted to kill me. Mostly because my room always looked like Wal-Mart exploded. I couldn’t see the mess. I was not equipped mentally to deal with the sorting and storing needed to make the bomb site habitable. So when she said, “You have until three o’clock to clean this sty, or you’re grounded,” I suffered the punishment.

Publishing is not trying to kill you.

The internet went crazy when Penguin announced that certain authors were being sued over failure to deliver books. Writers threw up their hands and moaned about deadlines. Even though the writers being sued had contracted these books as long ago as 2003, todays writers feared that they would be the next to get the ax. Seriously people, one of those books was NINE YEARS LATE. I personally know people who have asked for, and received extended deadlines. Sometimes there are emergencies. Publishing isn’t heartless, and they don’t want you dead.

Where’s the profit in that?

The point of all of this

A writer needs to keep a childlike wonder of the world and the people who occupy it. They need the unbounded imagination of a five-year-old coupled with the wisdom of an adult. As business people, we need to separate the resentment we held as children to authority figures and to not make publishing into our mothers.

Our mothers love us no matter what we do. Publishing hires us to complete a job. Yes, we make art. Yes, we’re dramatic, and odd, and have all of the quirks that creative people are known for. But as lovely and friendly as you may be, if you’re not responsible, publishing won’t hang your crayon picture on the refrigerator.

Article Name
How Publishing is Like Your Mother — Not!
Description
Publishing is not trying to make you crazy.. As much as I’d like to deny the fact, as a writer, I’m in the same helpless position I was as a child.
Author
Julie Butcher-Fedynich
BuzzyMag.com