Harry Blackstone Copperfield Dresden is a lady’s man and I want him to be mine. Here is why: 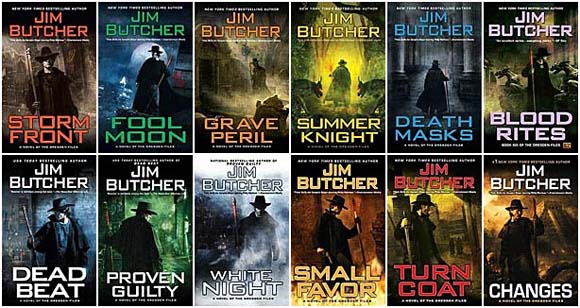 I was blessed the day I discovered Jim Butcher’s series The Dresden Files, and if you read my blogs, you know me – I’m a hard sell and a snarky bee-och. I was hooked from page one.

I first realized I loved Harry Dresden in chapter two of the first novel, Storm Front

. He was walking to a murder scene. A police officer, Karrin Murphy had Dresden come in as a consultant. Murphy is a bitsy little thing, a perky ski-jump nosed chick cop, tuff as nails with a bouncy blond pony tail. Harry walked along side of her down the sidewalk. He’s a towering 6 foot plus lean and wiry guy in a billowing trench coat and leather fedora. Harry listened to her brief him on the situation while they headed towards the double doors of the apartment building where

the murder took place-until he realized that Murphy was walking just a little faster than he was. He instantly realized, because he’s a brilliant detective, that she was going to reach the double

doors just a step before him, and in doing so, she would no doubt open the door first. Harry, a diehard yet lovable chauvinist couldn’t let that happen, he lengthened out his stride and noted he lost track of what she had said, but continued to “mmm” like he had been listening. He calculated that his long legs were going to get him to the door first, Murphy having to take three to his one, but now he noted, as a good detective would, she was up to four. She was racing him and she was onto his plan, like an old and good friend would be. This wackiness escalated, the two of them not running down the street mind you, but literally power-walking as casually as one can without actually running just to see who would get to the door first. Harry won, and panting “my Lady,” opened the door as Murphy walked in panting back, something like “chauvinist pig.” (A few of the finer points could be off a bit, but in essence, I captured the moment.)

Over the years and books I’ve gotten to know Harry pretty well. I had thought at one time that he and Murphy would start dating, but then I realized that she was not the girl for him.

Murphy is the type of girl you have as a friend. She transcends gender. She is “one of the guys” but can lend her feminine perspective and wisdom when Harry is in need. And Harry is often times in need of both. Was there ever a thing between them? Yea, but the timing was never “right,” and the fact that as the series goes on and they talk about how the timing was never right is proof enough that they are friends. Real friends talk. Besides, when the series started, Harry had a girlfriend, of sorts. The very sexy newspaper reporter, Susan Rodriguez.

Harry and Susan. They were a fun couple with an impending cloud of doom circling over head. When book one, Storm Front

, opens, Harry and Susan are more than sex-buddies, but less than boyfriend and girlfriend. It’s complicated. She works for a weird news tabloid called The Arcane and needs freaky stories about aliens and monsters. On occasion she is working a story that is also a case Harry is trying to solve. From time to time Susan needs a lead for a story or Harry knows that Susan has the scoop on something, and after a little wining and dining, their pillow talk turns to work and information is freely exchanged. Harry really kinda digs her, a lot, and she is a hot little Latino number as well as a startling flirt and magnificent tease. She likes the stringless relationship they have. Susan keeps Harry at a reachable distance, but never too close, a thing that suits Harry well enough. See, he is still fearful of the “L” word (love not lesbian) because of his first love, Elaine. He never got over the fact that he had to kill her. Go fig. 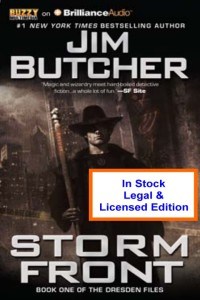 In Storm Front we learn that Harry and Elaine did their wizard apprenticeship under a guy named Justin DuMorne. Justin was evil and was brainwashing them. Harry was able to break the bonds, but Elaine could not. One thing lead to another and in a literal blaze of glory, Harry killed them both. Or so he thought for a long, long time.

BTW – In my interview with Jim Butcher, (which is available to view here: Jim Butcher Video Interview ) I asked Jim some pretty direct questions about Justin, about whether or not he’s really dead, because, I don’t buy it, not for a minute. Go ahead and watch it and see for yourself who squirms in the chair. Just keep in mind that I was really nervous and fidgety and the chair I was sitting in was three sizes too small for me.

My grandma had a saying. It went “Whoever loves the least rules the relationship.” As the books progress, Harry and Susan eventually come together, in book two, Fool Moon

. They learn to love one another. Susan is still driven by her work and Harry loves her. He buys a ring. Harry can’t afford to feed himself and is always late on his rent but he manages to buy her a ring. As can be detected by the tone of the words I have been using, something bad happens to Susan. She is kidnapped by vampires and bitten. She will become a full blown vampire herself after her first feeding.

Harry and Susan both know this. She doesn’t want to risk it, and leaves him. Alas and Alack! But she wasn’t “the one.” Sha na na na, sha na na na, hey hey hey, good-bye!

Harry is devastated. He keeps the engagement ring on the mantle of his fireplace for like two more books. He is despondent; his heart is broken into little pieces, and in his grief and self imposed exile, turns into the stinky kid on the bus. He stops taking care of himself, even stops gaming.

And then, of all the gin joints in the world, she has to go and walk into his.

. We all thought she was dead, but here she is. I don’t like Elaine. Not even a little. I didn’t like her when she was a flash back character, when I thought she was dead, and I most certainly did not like her alive and in Chicago and talking to my Harry. Where was she when he was hurting? Was she there when he had to fight werewolves, or giant scorpions, or be the friend he needed when Susan left the country to join the Fellowship of St. Guiles as we learned she did in the fifth book, Death Masks? No, I was. I was there. And now here she comes, like she didn’t almost kill him when she was under the mind control of an evil wizard. Some nerve on that one let me tell you. Thankfully, she is as unattainable as ever and has a lesser version of a detective agency in California. Book nine, White Knight

has her heading back out there, and to that I say – good riddance. We don’t need her. Harry and I are fine without her. She’s not right either. She’s trouble that one. Bad Trouble, with a capital “T”.

There was also the fallen angel, Lasciel, Harry called her Lash for short. Although she was not a girlfriend, but literally a voice in his head, they did have a “thing.” I say “thing” with quotation marks around it because Lash did manage to create an illusionary form of a woman that only Harry could see and he was getting sorta sweet on her. Ultimately, he figured it all out, and Lash stopped the temptation, but I suspect that she was sorta falling for him. Regardless of who was crushing on who, Lash did give up her immortal life and die so that Harry could live and continue to fight the good fight. She left him with the ability to play classical guitar and a mild form of basically harmless brain damage. Nothing Harry’s doctor, Butters the Medical Examiner, was too concerned about. And Harry, in a most beautifully written scene, played his guitar and wept for her. Brings to mind the John Lennon song, While My Guitar Gently Weeps.

, Harry and his boss Anastasia Luccio begin a relationship. She is several hundreds of years older than he, but in a previous book was body swapped ah-la Freaky-Friday* into the body of a hot evil babe. She seems to enjoy Harry’s company and certainly enjoys using her new body to play catch-up on all the sex she missed out on. But it won’t last. She’s not right for him, she is not the one. Luccio is a cougar, albeit a nice and pleasant one who seems to care for her boy toy, but, there is nothing there, it’s an empty thing. Harry doesn’t love her. She doesn’t love him. Neither seems to want to take their relationship to the next level. She may have a key to his apartment, but so does Murphy, his apprentice Molly and his brother Thomas. As you can see, Harry is just giving keys to his place out both willy and nilly. And Murphy, Harry’s best friend, happens to agree with me. We think it’s OK while its lasts, but it won’t last. We know this.

Not for nothing, Harry Dresden is a Byronic hero. (Google the word Byronic people, I can’t spell everything out for you!) A hero needs pain to grow. A Byronic hero needs lots of pain to live day to day. Harry gets three times the pain of any other hero out there. One day, when Harry and Luccio break up because of the pointlessness of it all, it won’t just be bad, it’ll hurt. Deeply. Deep hurting. And although I wouldn’t have it any other way, I’ll have to be there and cry it out with Harry, alone and in private.

Besides, if there is a girl for Harry in the series, we haven’t met her yet. I’ll know her when I see her. Harry can have whatever happiness he can eek out from these other women, but it’s always me who he tells his secrets to, who knows his intent, his heart desire, his fears. When “the big reveal” is about to happen and the wagons are circling, I’m not one of the folks he’s trying to hide or protect. I get to go on the missions with him. I know that he’ll die for others, but he’ll live for me. Although, admittedly, the book are told in a first person narrative, so it makes a kind of sense I would be in on all that stuff. And I may sound just a little bit on this side of crazy, but it’s not true, you’re just jealous because Harry and I are close.

* Freaky Friday is a book written by Mary Rodgers. Do not see the movie, READ THE BOOK, tis way better and truly is a timeless classic.